On the Road to Marfa with Elmgreen and Dragset 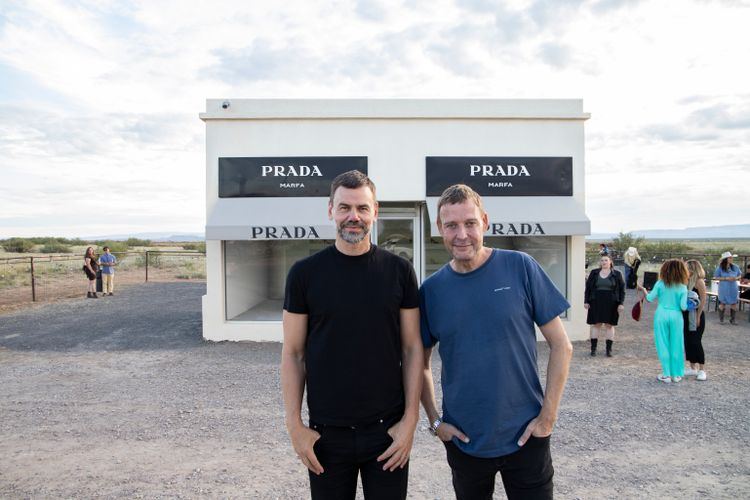 “She’s grown into a grand old lady!” exclaimed Michael Elmgreen, when he saw Prada Marfa appear against the endless roadside of Highway 90, one mile west of Valentine, Texas. Ingmar Dragset yelped: “She’s still standing!” Fourteen years after the Scandinavian artist duo installed the sculptural work in the desert, they were back in Texas for the first time for a museum survey, Sculptures, at the Nasher Sculpture Center in Dallas (until 5 January 2020), and decided to do some “window shopping”. Joining them on the road trip to visit one of the most famous works from their 25 year career was a group that included Nasher curator Leigh Arnold, the artist Alicja Kwade, and the Galerie Perrotin director Valentine Blondel.“Sculptures take on their own lives and we, the artists, are not in charge of them anymore,” Elmgreen said at the Nasher, where their extensive exhibition takes over the entire museum and its sculpture garden, and includes signature pieces, such as Modern Moses (2006), Marriage (2004), and a new iteration from their Queer Bar/Powerless Structure series. But Elmgreen’s comment might be best proven by Prada Marfa, which has over the years become a something of an American cultural emblem, even appearing in an episode of the animated TV show The Simpsons. The duo first approached Art Production Fund founder Yvonne Force Villareal with an idea of placing a non-functioning Prada store in the Nevada desert in the early 2000s, but Force Villareal’s personal connection to Marfa and the town’s status as a Mecca for Minimalist art made it a better fit for the conceptual installation. The duo chose adobe for the construction as an homage to the area’s architectural texture and spent time in the slow-paced town, with a population of 1,900. And It took a collective effort to realise the permanent public sculpture. A local ranch owner, Smokey Hall, donated the roadside parcel of land; the non-profit contemporary art space Ballroom Marfa co-produced the work; and the Italian collector and designer Miuccia Prada provided handbags and shoes from the brand’s Fall/Winter 2005 collection. But Elmgreen and Dragset credit the work’s blending into the Texas landscape to the local artist Boyd Elder, who died last year at the age of 74. “Seeing a local icon like Elder embrace Prada Marfa influenced the population to accept it,” Dragset said. The work has been subject to vandalism over the years—and was nearly evicted by the Texas Department of Transportation as an illegal roadside ad—but except for minor repairs, it has been left to weather the elements in the desert. While walking through Marfa’s Chinati Foundation, started by the American artist Donald Judd on a former military base as an open-air museum to show his and his friends’ work, I asked Elmgreen which of the collection’s artists they are inspired by. He admitted to finding John Chamberlain’s sculptures sexy because they resemble bodies intertwined in lust. And he said he and Dragset were strongly influenced by Ilya Kabakov’s installations, like School No. 6 (1993), a recreation of an abandoned former Soviet Union era school at Chinati, when making their own immersive installations, such as Past Tomorrow (2015), which turned Galerie Perrotin’s New York location into the haunting and elaborately-furnished bedroom of the fictional failed architect Norman Swann.