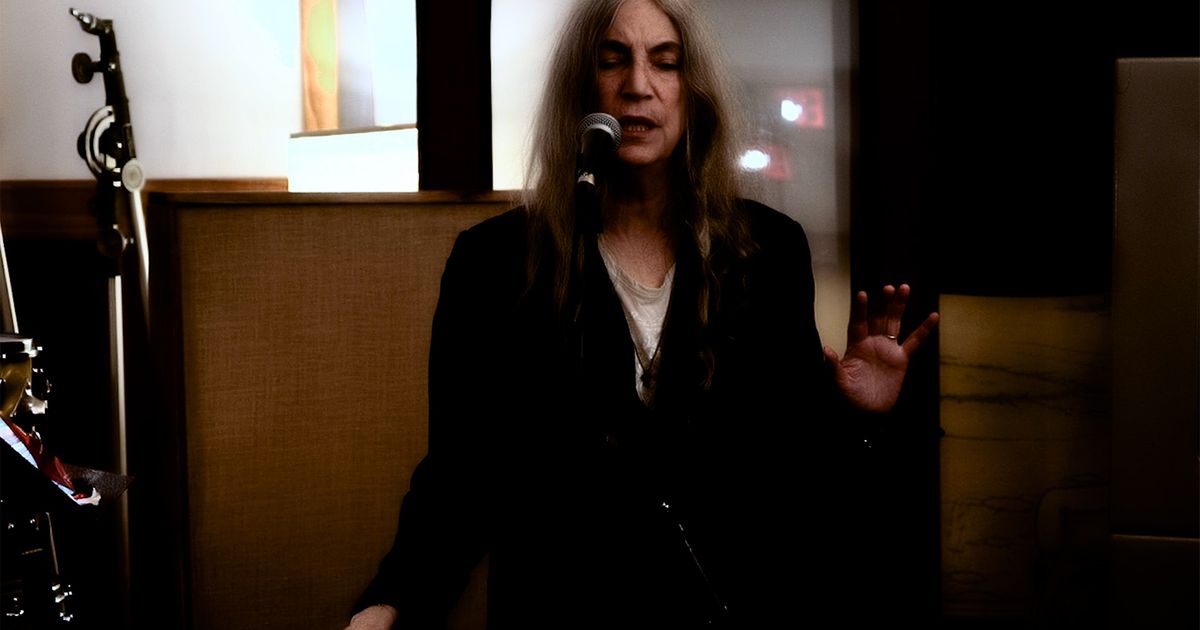 Patti Smith performing on New Years Eve
© Circa, courtesy of the artist

Covid-19 restrictions may have meant that Patti Smith’s New Year’s performance, commissioned by the digital platform Circa for the London’s iconic Piccadilly Lights screen, could only be streamed online. But it still offered a rousing—and moving—start to 2021 that also marked the start of her month-long residency upon the giant illuminated hoarding. On the stroke of midnight the legendary rocker, poet and artist delivered a stirring rendition of Auld Lang Syne, which she then followed with a moving tribute that acknowledged, with “sorrow and respect”, one hundred NHS and healthcare workers who had lost their lives over the past 12 months. Images of these heroic individuals were interspersed with Peaceable Kingdom, a song written by Smith “to comfort the living when they lose loved ones”, which she also described as “a song of rebuilding our world”.

Patti Smith shown on the Piccadilly Circus Lights
© Circa

And since 1 January, Smith has been back up on Piccadilly Circus lights where she will be making an appearance every day throughout this month as the latest artist invited by Circa to present a specially commissioned work in response to our tumultuous times. Her contribution to the Circa 20:21 programme continues the New Year theme with 2021: A New Year, a poem offering a vivid outpouring of hope that owes much to Smith’s love of the visionary poet William Blake and which she recites from the intimate lockdown setting of her New York bedroom. This most necessarily paean to positivity is screened daily from Piccadilly at 20:21 GMT, as well as being broadcast online. But on special occasions Smith also plans to fill the slot with something different. She’s already recited a poem written especially for Greta Thunberg to celebrate the 18th birthday of the young environmental activist, or as Smith describes her, “a school girl who stepped out on her own and appealed to us all to save our earth together.” Then on 13 January, the anniversary of the death of James Joyce, she will be reading from her own first edition volume of the Irish writer’s experimental masterpiece Finnegan’s Wake. Also watch out for something special to celebrate the inauguration of the US President-elect Joe Biden and Vice President-elect Kamala Harris on January 20, a day which now has even greater significance in the aftermath of yesterday’s storming of the Capitol by a pro-Trump mob. And for those Patti Smith fans who would like to have her words all to themselves, Circa is offering four prints of Smith’s hand-drawn drafts of The Cup, her 18th birthday poem for Thunberg, taken from the pages of her personal notebook, for £100 apiece. These are only available during the month of Smith’s residency, up to 31 January. Proceeds go to Circa Economy, a charity committed to supporting the UK’s creative economy. Or if you fancy your own name up in lights, for donations between £100-£5,000 in support of Circa’s programme, there is room for 1,000 individual names to appear after each artist’s daily broadcast up until the end of the year. Let’s hope by then the wish issued by Patti Smith on 1 January 2021, that “we find a way to reset, to retune and as a people find our way …to unify and make things better” has been achieved.

Vandals apprehended after covering Richard Serra’s vast desert sculpture in Qatar with graffiti
From lockdowns to looting: how Covid-19 has taken a toll on world’s threatened heritage sites
To Top
error: Content is protected !!
Top