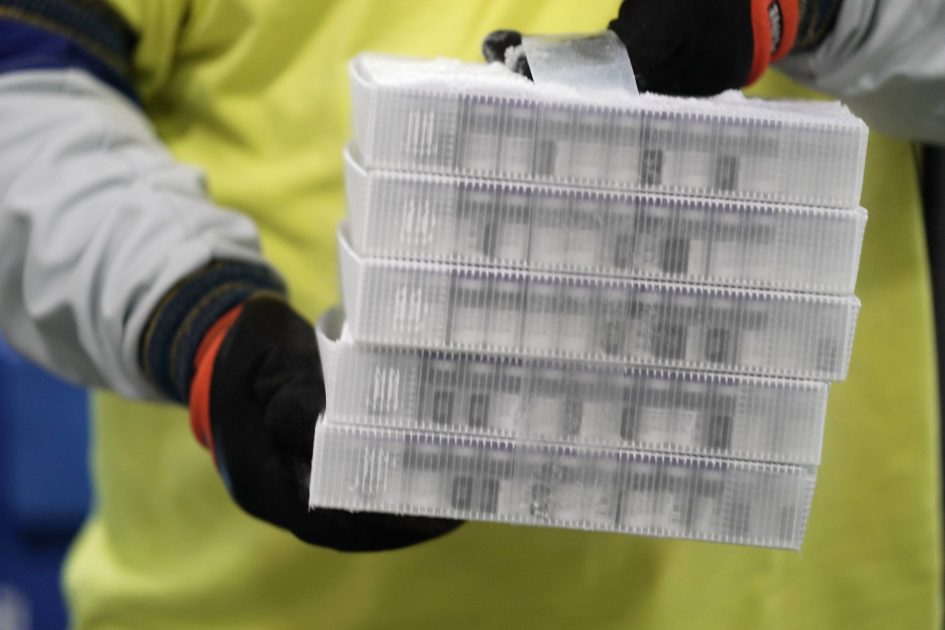 Vials in boxes containing the Pfizer-BioNTech Covid-19 vaccine are prepared to be shipped at the Pfizer Global Supply Kalamazoo manufacturing plant in Kalamazoo, Michigan on December 13, 2020.Morry Gash | AFP | Getty ImagesPfizer CEO Albert Bourla said the company is negotiating with the federal government to provide an additional 100 million Covid-19 vaccine doses next year as Americans will receive some of the first shots Monday.Pfizer and the U.S. are working out details on timing, Bourla told CNBC’s “Squawk Box” in an interview Monday morning. The company could provide many of those doses in the third quarter of 2021, but the U.S. government is pushing for it in the second quarter, he said.”We are working very collaboratively to try to find a solution and be able to allocate those 100 million [doses] in the second quarter if possible or a lot of them,” Bourla said, adding the company has not signed an agreement with the U.S. yet.The comment came after the Food and Drug Administration approved Pfizer and BioNTech’s coronavirus vaccine for emergency use late Friday. The vaccine was authorized for people 16 and older.The first doses of a Pfizer vaccine with BioNTech began shipping across the U.S. over the weekend. Trucks carrying boxes containing vaccine doses left Pfizer’s manufacturing facility in Kalamazoo, Mich. on Sunday and were expected to arrive Monday, according to Pfizer. The company said 189 boxes containing a total of 184,275 vials are shipping to sites across all 50 states and 4 boxes will ship to U.S. territories. The vaccine is a two-dose regimen with the doses administered three weeks apart.Initial doses of Pfizer’s vaccine will be limited as manufacturing ramps up, with officials predicting it will take months to immunize everyone in the U.S. who wants to be vaccinated. The vaccine is expected to be distributed in phases with the most critical U.S. workers and vulnerable people getting it first. The CDC has provided states with an outline that recommends prioritizing health-care workers and nursing homes first, but states can distribute the vaccine as they see fit.Gen. Gustave Perna, who oversees logistics for Operation Warp Speed, said Wednesday that the government would distribute 2.9 million doses of the vaccine within 24 hours of approval for emergency use from the FDA, followed by an additional 2.9 million doses 21 days later for patients to get their second shot. Pfizer’s vaccine requires two doses three weeks apart.Pfizer already has a deal with the U.S. government to supply 100 million doses of the vaccine as part of the Trump administration’s vaccine program Operation Warp Speed, enough to inoculate 50 million people. Under the agreement, Americans to receive the vaccine for free.The vaccine could not come at a more crucial time. Hospitals across the U.S. already have a higher load of Covid patients than ever before, and the country’s outbreak is primed to set even more grim records. The director of the Centers for Disease Control and Prevention, Dr. Robert Redfield, warned earlier this month that the next few months of the pandemic would be among “the most difficult in the public health history of this nation.”President Donald Trump has previously said he would invoke the Defense Production Act if needed to ensure Americans can get a vaccine.Bourla said Monday that would be “very positive,” he said. “I hope they would do that very soon because, particularly in some components, we are running at critical supply limitations. But I think they will do it, so it will be no problem.”— CNBC’s Spencer Kimball contributed to this report.