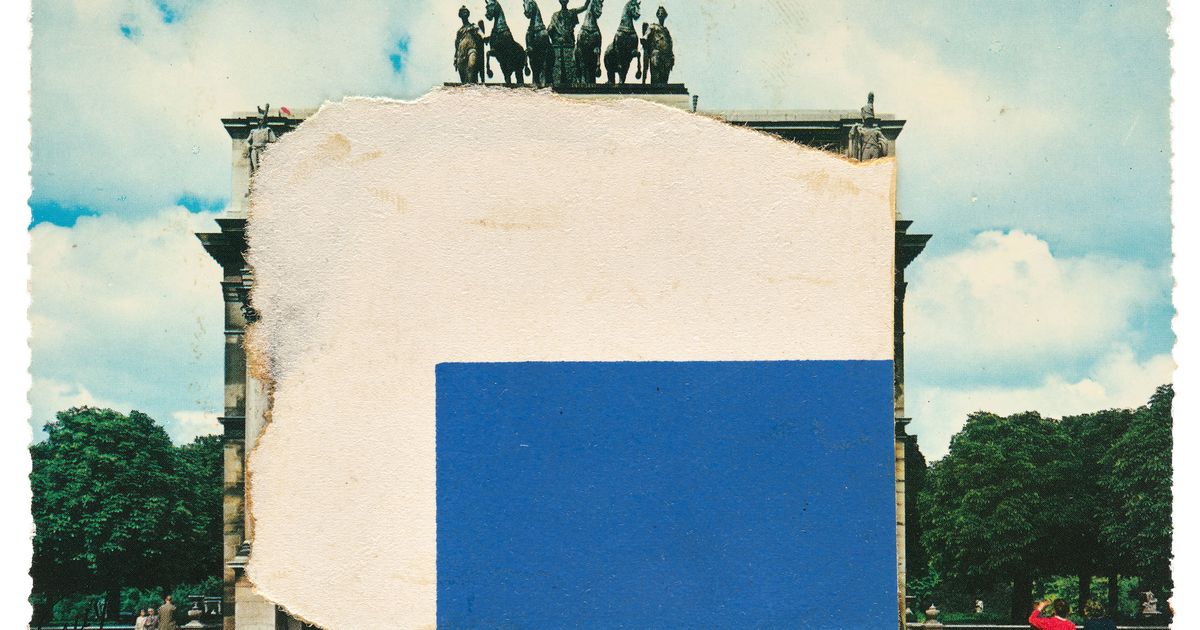 To mark the public reopening of the Frances Young Tang Teaching Museum and Art Gallery at Skidmore College in Saratoga, New York, around 150 of Ellsworth Kelly’s rarely seen postcard collages are being shown together for the first time. The exhibition Ellsworth Kelly: Postcards (10 July-28 November) is “an inside view to his process and, in many ways, to his life and history,” says Ian Berry, the museum’s director, who organised the show in collaboration with the Ellsworth Kelly Studio and independent curator Jessica Eisenthal. Kelly’s postcard collages show his inventive approach to abstraction drawn on found composition and observation in the physical world. “The elements of chance, fragmentation, how one frames the world—all the elements that, I think made Ellsworth Kelly such an important artist in our history can be found in these postcards.”For more than 50 years, Kelly made close to 400 postcard collages. Some were sent to friends and family, while others were kept by the artist at his studio, using the same postcard multiple times, experimenting with different shapes and configurations. Some were later used as a basis for larger works, such as his two-panel painting White and Dark Gray Panels and the shaped painting Curved Gray Panel, both created in 1977.

These intimate works give insights into Kelly’s travels, creative musings, artistic vision and strategies of visual play inside a framed edge. “They were used in a lot of ways for him—a fun way to connect with his friends while he was travelling as well as in his other work,” Berry says. “Before Photoshop and CAD (computer-aided design) software, this was Kelly’s way of testing an idea, placing an object in a landscape and seeing it to scale. It allowed him to place a triangle of colour into a landscape and suddenly, it looks 100 feet tall.” In a 1989 interview with the journal Forum, Kelly said these works “represented my desire to make large colour shapes in nature, that is: sculpture”.

Kelly’s visual puns are also evident in the postcard collages. “The playful part comes in responding to the postcard—putting a colossal nose on a beach scene,” Berry says, adding that “there’s a more serious, experimental side going on when he is, in a sense, using postcards as an extension of his sketchbook.”An extensive catalogue is due to be published in conjunction with the exhibition, featuring 1:1 scale reproductions of 250 works. It includes newly commissioned essays by the art historians Eisenthal, Tricia Paik and Lynda Klich, along with Kelly’s 1990 text, “Fragmentation and the Single Form”.In her essay, “Recto/Verso” Eisenthal writes: “The collages involve a fundamental interplay between concealment and exposure, with every card containing both a secret and its revelation, a construction and a deconstruction.”

Sharing his unique view of the ordinary in a 1973 interview with Smithsonian, Kelly said: “If you could try to think of yourself as just born from another planet and try to understand things from a purely visual point of view—then everything is fantastic. Everything has infinite possibilities. Anything goes, and what you see can be used.”• Ellsworth Kelly: Postcards, Frances Young Tang Teaching Museum and Art Gallery at Skidmore College, Saratoga Springs, New York July 10, 2021-November 28, 2021. The show travels to the Blanton Museum of Art at the University of Texas at Austin in 2022.