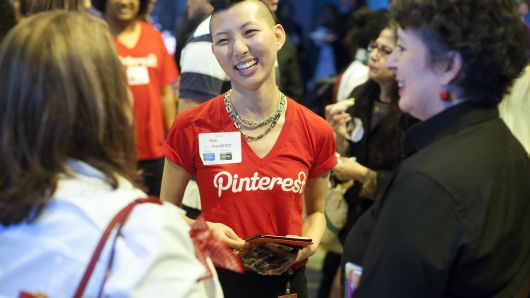 A Pinterest employee speaks with attendees during a Pinterest media event at the company’s corporate headquarters office in San Francisco.

Pinterest is expected to price its initial public offering above the expected range, according to The Wall Street Journal.

Pinterest is expected to price its IPO on Wednesday.

The image-sharing social media company initially said in a regulatory filing that it planned to sell 75 million shares at price range of $15 to $17 a share, valuing the company at $9 billion.

The company reported $756 million in 2018 revenue in its IPO prospectus. Revenue grew 60% year over year, but the social media company still had a net loss of $63 million.

Pinterest will list under the symbol PINS on the New York Stock Exchange. The company will go public with a dual-class share structure to concentrate voting power with Class B shareholders, which include co-founder and CEO Benjamin Silbermann.

—CNBC’s Sara Salinas and Reuters contributed to this report.