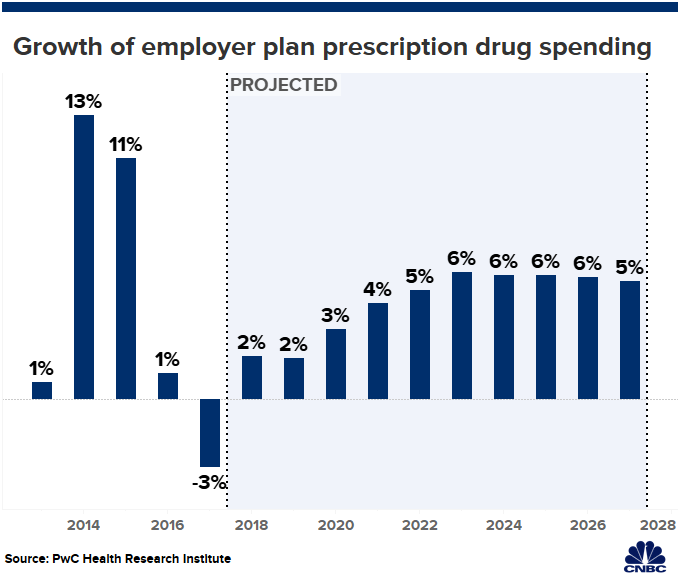 A pharmacist fills out prescription in New York City.

The presidential hopefuls aren’t the only ones eyeing health care issues for 2020. Large employers are putting together benefit plans for next year, and they are expecting the rise in employee health costs to hit a four-year high, in part, due to rising drug prices.

Private employer medical costs are projected to increase by an average of 6% next year, after averaging about 5.5% annually over the last three years, according to PwC Health Research Institute’s annual Medical Cost Trend survey of more than 500 of the nation’s largest employers.

The jump in spending is being attributed to expensive specialty drugs that weren’t available a few years ago. Researchers say spending on specialty medications to treat cancer and other complex diseases now makes up more than 40% of overall employer drug spending.

“The portion of the pie that goes to specialty drugs is growing and has grown substantially, so that’s one big reason why we think there’ll be a big uptick in drug spending over the next decade,” said Ben Isgur, who leads PwC’s Health Research Institute.

Next year, drug spending is expected to grow more than 3%, and that growth rate is expected to double by 2023. While still well below the 13% spike in costs following the introduction of new hepatitis C drugs in 2014, the trend has employers looking to get ahead of increases.

PwC says more large employers will likely look to boost the use of biosimilars — lower cost versions of biologic drugs which are complex medications that use parts of tissues, genes and other living organisms to create more targeted disease treatments.

It will take more coaxing of physicians and patients to use them more, says Isgur. PwC’s own research found nearly three out of four doctors remain leery of recommending biosimilars, in part, because they were not significantly cheaper.

“If we go back a couple of decades, we were having the same conversation regarding generic and branded drugs. Of course, now … 80% of prescriptions are generic,” he said.

Employers are also taking a more hands-on approach to control the costs of medical care. Plans with high deductibles and digital tools to shop for cheaper care were intended to make workers better health-care consumers, but now more companies are trying to take the guess work out of finding cost-effective care.

“What we’re seeing is employers saying, ‘the way it’s working now is not great for my employees and so I need to get more active’ and more controlling working with the provider system,” said Isgur.

More employers are contracting directly with health systems on hospital costs for high-priced care like surgery. They’re also being more hands on about preventive care.

Helping workers get healthier pays off in the long run. Medical costs for workers with chronic conditions like diabetes or heart disease can run more than three times that of healthy workers, according to PwC.

But achieving those savings doesn’t come cheap. PwC says more employers may look to offer more financial incentives to engage workers to actually manage their chronic conditions. For at risk workers, that could mean lower or zero co-pays on diabetes and heart disease medications, and other incentives for managing their health.