Consumer stocks are taking a big hit lately because of fears the new tariffs against China will raise the costs of products for retailers. But history shows the drop in shares has gone too far and they may be due for a bounce back.

Stocks bounced back on Tuesday, snapping a 6-day losing streak capped by a disastrous Monday, when the S&P 500 Index suffered its worst day of 2019, plunging 3% as an escalation in the trade war between the U.S. and China rocked stocks.

History says those losses could precede significant gains and the consumer sector can continue to climb like it did on Tuesday.

Over the past five years, the XLY has seen similar one-week losses on four other occasions. A month after those drops, the ETF tends to bounce back, gaining an average of 7%, and trading positively in each four instances, according to a CNBC analysis of Kensho, a research platform used by Wall Street banks and hedge funds to identify potential trades based on market history.

The S&P 500 also performs well, tacking on nearly 5%, and also trading positively 100% of the time. Technical chart traders see a trend in the S&P 500 that suggests it will prove resilient.

There are few caveats.

This phase in the trade war is expected to hit the consumer harder than the previous ones with the Trump administration now planning tariffs on all Chinese imports, including consumer favorites like sneakers — Nike is among the top 10 holdings in XLY. Overall, 70% of U.S. shoes come from China, but Nike has diversified its manufacturing bases. It made 26% of its shoes in China, according to its 2018 annual report, and almost twice that much in Vietnam.

TJX Companies is among the top 10 holdings in XLY — retail stores are a point of concern for Wall Street in the latest round of the trade war, but some analysts see the pain to come as benefitting discounters like TJX that are already outperforming legacy department stores such as Macy’s.

Lowe’s, which is among the top 10 holdings in XLY, announced last week that it was laying off thousands of workers.

Consumer spending, which accounts for more than two-thirds of U.S. economic activity, has been one of the bright spots for the U.S. economy. Retail sales were strong through June, and the latest Commerce Department consumer spending report showed an increase at a 4.3% annualized rate, accelerating from a tepid 1.1% pace in the January-March period.

Amazon is the largest holding in XLY, at roughly 22%.

There have been some signs of a slowdown in spending in recent months even as it remains positive.

One key area of consumer spending flashing warnings signs: Autos. Car dealerships are currently sitting on the highest percentage of older models of new cars — unsold vehicles from model year 2018 taking up space on lots as they get ready for 2020 models — since 2005. 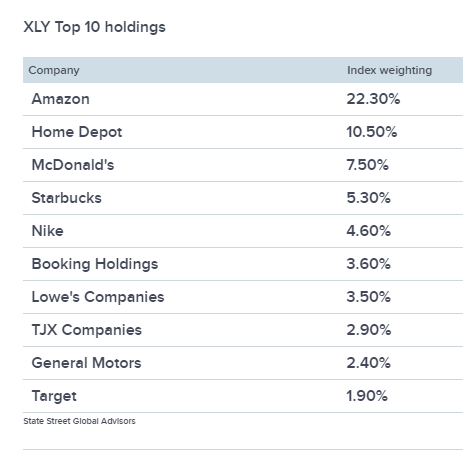