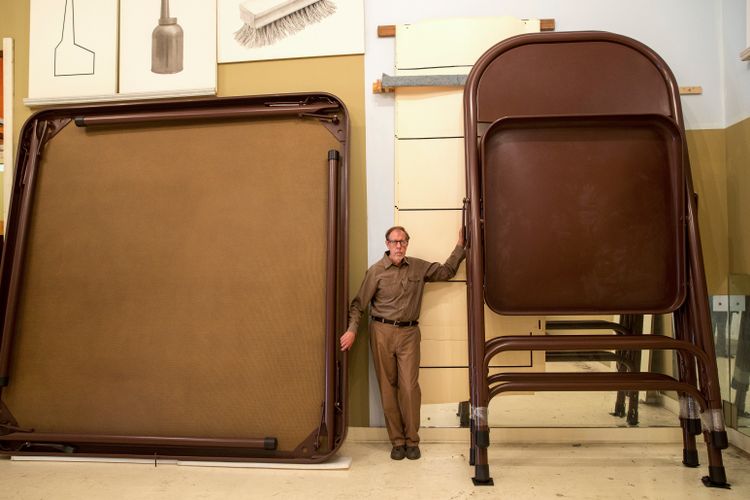 
Robert Therrien, an artist who frequently made the familiar eerily strange by rendering everyday objects in outsize formats, died on Monday aged 71.

His death was confirmed by Gagosian Gallery, which represented him and most recently organised a show of his work in San Francisco that closed last month. The gallery praised his “repetition and refinement of found and invented forms”, which charged ordinary objects “with intentionality and a latent sense of the unattainable”. It said that his studio in Los Angeles grew to be “a fabled fixture” downtown and “straddled the line between fantasy and reality, like much of his work”.

Born in Chicago, Therrien relocated at a young age with his family to the San Francisco Bay Area, where he studied in Oakland at the California College of Arts and Crafts (now the California College of the Arts) before decamping to Southern California. He studied photography at the Brooks Institute in Santa Barbara and earned a master of fine arts degree at the University of Southern California before gaining a reputation on the local art scene for fashioning humdrum objects with an air of surreality. In the 1980s and 90s he was represented by Leo Castelli in New York and Konrad Fischer in Düsseldorf and gradually gained a national and international profile.

In 1984, Gagosian notes, the Museum of Contemporary Art, Los Angeles presented six re-creations of Therrien’s studio, complete with artworks, reflecting the degree to which his “art and domestic life are deeply intertwined”. In 1991, the Museo Nacional Centro de Arte Reina Sofía in Madrid presented a survey of Therrien’s work, including a sculpture comprised of three worn white cabinets that “simultaneously echo the seriality of Minimalist sculpture and the intimate tactility and history of found objects”.

Over the years his enlargements of familiar objects included a nearly 10-foot-high kitchen table, stacks of restaurant plates and Revere Ware pots. In a 2013 interview with The New York Times he suggested that his intent was not so much to convey a sense of giganticism as to reward quiet contemplation on the part of the viewer. “The projects that are blown up in scale are about things that are thought of two dimensionally, and then inserting yourself into it, rather than having an interest in just blowing things up,” he said. “The reason the table became big was because I asked, ‘What if people could walk into an environment like that?’”