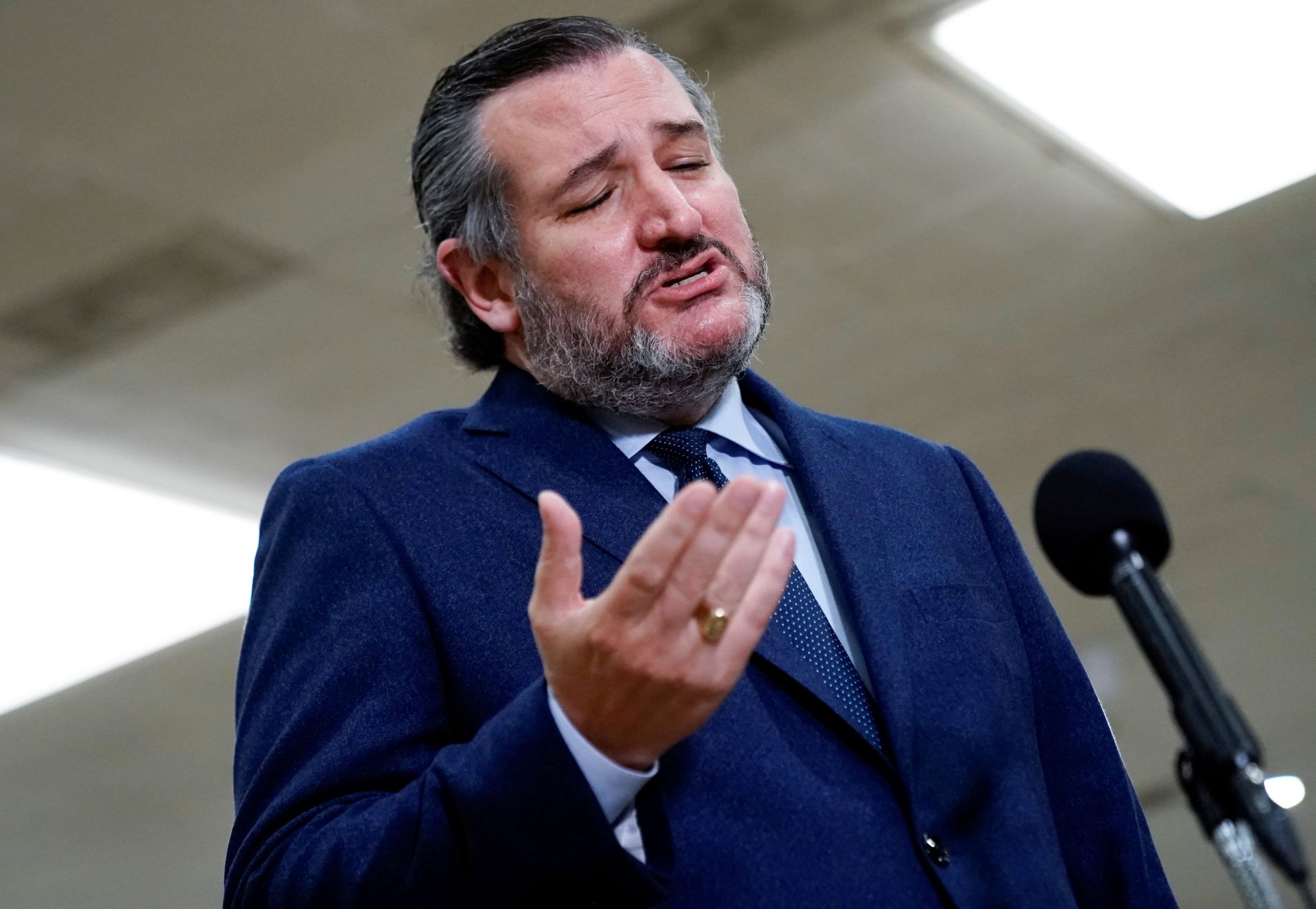 Images purportedly showing Ted Cruz board a United Airlines Flight to Cancun, Mexico from Houston, TX.Source: @Ian McBride via TwitterIs Sen. Ted Cruz now going to be known as “Flyin’ Ted”?Cruz sparked widespread outrage for flying from Houston to Cancun, Mexico, for a family vacation even as millions of his fellow Texans froze because of historically low temperatures and widespread power outages.After hours of his spokesmen not responding to media requests for comment, Cruz issued a statement Thursday afternoon that said he took the trip because his daughters asked him to do so.”Our homes are freezing and our lights are out. Like millions of Texans, our family lost heat and power too,” Cruz said.Thousands of Twitter posts blasted Cruz for the ill-timed jaunt after photos circulated online of him at a Houston airport waiting to board the flight Wednesday afternoon, and then onboard the plane.On Thursday, other images showed someone with the Republican’s last name and first initial of his legal first name — Rafael — standing by for a United Airlines flight from Cancun back to Houston. That flight is scheduled to depart Thursday afternoon.At the time, the temperature in Houston was just 34 degrees Fahrenheit — 50 degrees colder than Cancun.”This has been an infuriating week for Texans. The greatest state in the greatest country in the world has been without power. We have food lines, gas lines, and people sleeping at the neighbors’ houses,” Cruz said. “Like millions of Texas, our family lost heat and power too.””With school cancelled for the week, our girls asked to take a trip with friends. Wanting to be a good dad, I flew down with them last night and am flying back this afternoon,” Cruz said.”My staff and I are in constant communication with state and local leaders to get to the bottom of what happened in Texas. We want our power back, our water on, and our homes warm. My team and I will continue using all our resources to keep Texans informed and safe.”Images purportedly showing Ted Cruz with Heidi Cruz (circled) board a United Airlines Flight to Cancun, Mexico from Houston, TX.Source: @Ian McBride via TwitterA Houston Police Department spokesman told NBC News that Cruz’s staff asked the department on Wednesday afternoon to assist Cruz in his arrival and movements through George Bush Intercontinental Airport, where there was a scheduled flight at 4:44 p.m. local time to Cancun.Images posted on social media show a woman who appears to be Cruz’s wife Heidi with him in that airport Wednesday.The Dallas Morning News reported that mask seen on Cruz from the airport is the same mask that Cruz wore during last month’s inauguration of President Joe Biden, and during last week’s Senate impeachment trial of former President Donald Trump.The mask has the image of a black cannon and the words ” ‘Come and Take It,’ a design reminiscent of flags used by Texans during the 1835 revolution against Mexico – a provocative choice, given the destination,” the newspaper noted.The Texas Democratic Party called on Cruz to resign or be expelled from office in light of the apparent trip.”In the middle of one of the worst crises in Texas history, Texas Republican Senator Ted Cruz jetted off to Cancun, Mexico. His constituents in Texas remain trapped in the cold, without clean water, heat, or warm food. 37 of them have died,” the party said in a statement.”This is what we’ve come to expect from Texas Republican leadership. They are self-serving, inept, corrupt politicians who think that being in office entitles them to do whatever they want.”Former Rep. Beto O’Rourke, a Democrat who lost a close Senate election to Cruz in 2018, blasted him during an interview Thursday on MSNBC’s “Morning Joe.”Cruz “is vacationing in Cancun right now when people are literally freezing to death in the state that he was elected to represent and serve,” said O’Rourke, who in 2019 campaigned for the Democratic presidential nomination.Julian Castro, the former San Antonio mayor who served as secretary of the U.S. Housing and Urban Development Department, tweeted, “In crises like these, members of Congress play a critical role connecting their constituents to emergency services and assistance.”Cruz “should be on the phone with federal agencies, not on a trip to Mexico,” Castro wrote.Ted Cruz listed on standby list for a United Airlines flightSource: United AirlinesOn Tuesday, Cruz was roasted on Twitter and elsewhere for having mocked California’s own power outages months ago.In response, Cruz tweeted that day, “I got no defense. A blizzard strikes Texas & our state shuts down. Not good.”In December, Cruz criticized Democratic officials who did not follow their own coronavirus pandemic restrictions, among them Steve Adler, mayor of Austin, Texas, who himself flew to Mexico for his daughter’s wedding in November even as he urged his city’s residents to stay home.”Hypocrites. Complete and utter hypocrites,” Cruz wrote in his Dec. 2 tweet.In July, photos showing Cruz without a mask on during an American Airlines flight and at an airport gate were widely reported.The person who took the photos, who worked for the Democratic Congressional Campaign Committee, noted that American Airlines policy required travelers to wear facial coverings.Cruz’s spokeswoman claimed at the time that Cruz had temporarily removed his mask to drink coffee.Trump, while running against Cruz in the 2016 Republican presidential nomination contests, regularly used the scornful nickname “Lyin’ Ted” when talking about him.Cruz later became an ardent Trump supporter, and last month unsuccessfully tried to get Congress to reject the confirmation of Biden’s Electoral College victories in several states.That confirmation process was interrupted Jan. 6 by the invasion of the Capitol complex by thousands of supporters of Trump. Five people, including a Capitol police office, died as a result of that riot.

Indra Nooyi: No economy can succeed without tapping the ‘incredible potential of women’
Watch NASA’s rover Perseverance after landing on Mars
To Top
error: Content is protected !!
Top