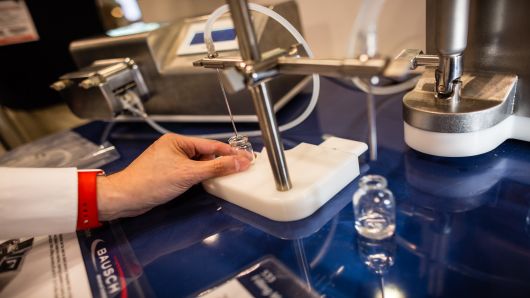 Bausch Health, formerly known as Valeant Pharmaceuticals, said Thursday that it and its dermatology business, Ortho Dermatologics, received approval from the Food and Drug Administration for its DUOBRII lotion to treat plaque psoriasis.

The company halted trading pending the news. Its shares rose more than 3% after trading resumed.

The lotion uses a “unique” combination of halobetasol propionate and tazarotene, which are topical treatments used to treat skin disorders such as itching and swelling.

Plaque psoriasis is a chronic skin disease that causes skin cells to rapidly build on the surface of the skin, creating dry, red lesions. About 7.5 million people in the United States live with psoriasis, with about 80% of them having plaque psoriasis.

Bausch conducted two clinical trials, with 36% of patients in the first study and 45% in the second study seeing their skin clear up. The company said a majority of the patients maintained success in a four-week post-treatment period, giving patients “clear” or “almost clear” skin. It said the lotion treated superficial reddening of the skin and reduced scaling on lesions caused by the disease in these patients.

Topical steroids are normally used to treat psoriasis, but some of these creams can cause the skin to thin, also known as epidermal atrophy.

Bausch Health had previously gotten tentative approval for its psoriasis lotion from the FDA in October. A similar treatment from the company failed to win clearance in June.