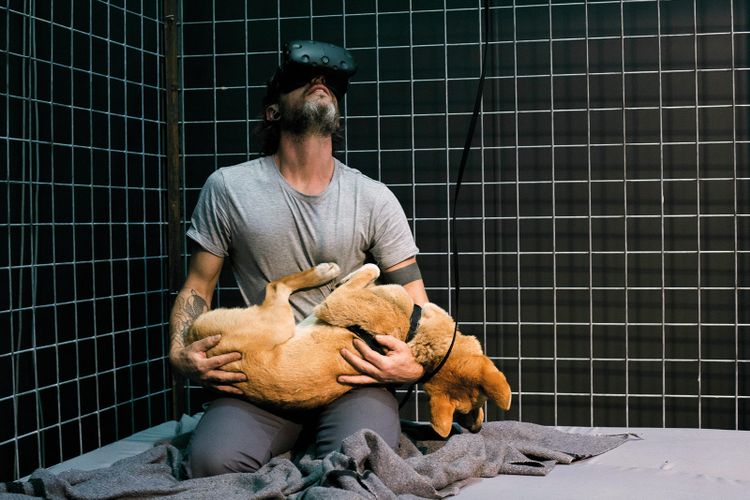 The New Zealand-born artist Hayden Fowler with a dingo in his performance Together Again (2017) at Sydney Contemporary
Photo: Joy Lai


As the environmental crisis makes headlines in Europe, with the Extinction Rebellion protests and the powerful speeches of Greta Thunberg, Moscow’s Garage Museum of Contemporary Art is getting involved with an ambitious group exhibition.

“It’s time to address this issue,” says Snejana Krasteva, who has co-curated the show on environmentalism and ecology with Ekaterina Lazareva. “In Russia, nobody seems to be panicked enough about it.” The exhibition will take over the gallery’s entire space making it the biggest in its history, and with more than 50 artists and eight large-scale immersive installations, the curators also believe it to be the biggest exhibition ever on the subject.

Furthermore, the show aims to practice what it preaches. “One of the biggest problems is the idea of doing an exhibition about ecology but not doing it in an ecological way,” Krasteva says. The curators have adopted a number of environmentally friendly processes in the show’s design, including reusing temporary walls from previous exhibitions, using local materials to recreate works according to the artists’ instructions and making digital-only guides. The museum is also calculating its carbon footprint for the full six-month run and plans to offset any difference by planting trees.


Unusually for the non-collecting contemporary art institution, the exhibition will also include older works, such as 16th-century tapestries and 17th-century Dutch paintings. The curators want to “show how the relationship between art and the landscape [has] changed”, Lazareva says. “We didn’t want it to be all about the future,” adds Krasteva. “Ecology is always about forecasts—things you can’t really touch or feel and the subject loses critical mass.”

This is also the reason for the shock factor of many of the works, particularly those that include live animals such as a “bee museum” by the German collective gruppe finger and a tank of jellyfish by the theatre group Rimini Protokoll. The New Zealand-born artist Hayden Fowler will spend ten days of the exhibition inside a cage with a real-life wolf, using virtual reality technology to digitally return the animal back to the wild.


The curators say the museum has made efforts to become more environmentally friendly by recycling waste and installing solar panels. However, for a museum that is largely funded by money from the oil industry (the co-founders Dasha Zhukova and Roman Abramovich both owe parts of their fortunes to mining fossil fuels) is this environmental focus in conflict with its history or in response to it?

“Neither,” Krasteva says. “If you scratch the surface of any institution nothing is one-dimensional. It’s true that companies who hurt the environment also give something back to that environment and find a way to make it more liveable for all of us.”

Support comes from the Australian Embassy and the Netherlands.