Simone Leigh, now in the spotlight, contemplates the theme of invisibility 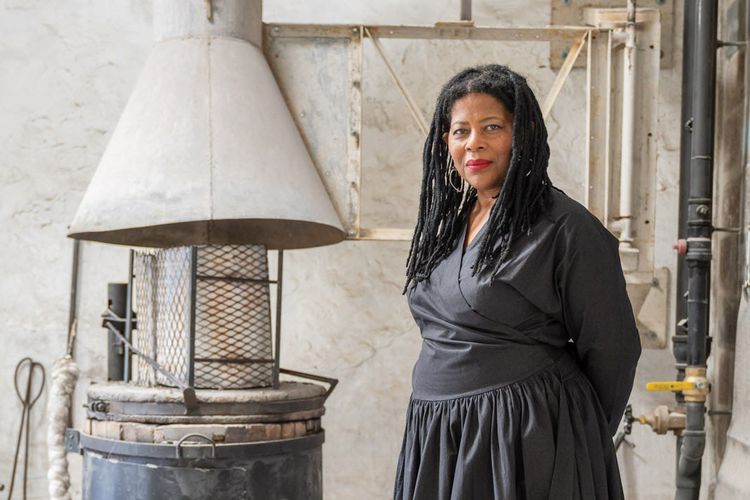 
The Brooklyn-based artist Simone Leigh is known for sculpture, video, performance and social projects that focus on race, history and gender, but above all on the black female experience. Her art, executed in materials like ceramics, raffia and bronze, is inspired by ancient African and African-American objects as well as ethnography, the history of architecture, feminist criticism and chronicles of political resistance.

Her social projects range from Free People’s Medical Clinic (2014), in which nurses, yoga and massage instructors and others provided services in a house in Brooklyn, to The Waiting Room, an exhibition at the New York’s New Museum that created a healing centre. Last autumn the Solomon R. Guggenheim Museum awarded Leigh the Hugo Boss Prize, which has culminated in a solo show at the Guggenheim that opened on 19 April. She has also created a colossal piece, Brick House (2018-19), that is on view at the elevated linear park in Manhattan known as the High Line, and she is among the artists in the Whitney Biennial (17 May-22 September).

The Art Newspaper: With your solo show at the Guggenheim, the installation on the High Line and the Whitney Biennial, are you taking the barrage of attention in stride?

Simone Leigh: I feel that I’ve arrived here through a lifetime of critical inquiry and hard work. In recent years, as I’ve been able to accomplish things my foremothers would have only dreamed of, my way of coping with my success is to focus on the responsibilities that it engenders.


Brick House, 16ft tall, before it was installed on the High Line in New York
Timothy Schenck


In your youth, when did you realise that you were going to become an artist?

I don’t have a memory of ever wanting to be an artist. When I was in college studying philosophy and cultural studies, I remember being really taken with the works that I saw photographed in a book called Nigerian Pottery, and it led me to think about the anonymous labour of women and also the way African objects and material culture are categorised. I continue to be interested in these sorts of things. I think of black women and femmes as a kind of material culture.

Most of the ceramics in your recent solo show at Luhring Augustine last year were female busts and bodies. In one piece, the top half is a woman with no face; another was a face jug, with a nose and lips but no eyes or ears. Is this a way of declining the gaze of the observer?

No, it’s a way of abstracting the figure because as I work I imagine a kind of experience, a state of being, rather than one person. I toggle back and forth between abstraction and figuration.

Face jugs are part of the early material culture of African-Americans. They represent a particular type of creolisation between West African and American cultures. Face jugs are a kind of power object. While they are handmade, they also have power. They act: they are something beyond being a container or vessel.

There are forms that recur in your work, like the cowrie shell and a dome shape. Do they have a specific meaning?

I would describe the cowrie shell as a stand-in for the female body, or a body in general, or a representation of an absence as well as a presence. With the dome, I was thinking both of the skirts in Velázquez’s Las Meninas and also the skirts that you see women use in the Afro-Brazilian religious tradition candomblé—the agency embodied in those skirts. There’s another dome-shaped structure that recurs in my work in the form of some architectures that I’ve been interested in, including Mousgoum buildings in Cameroon and other West and North African architectures.

As I work I imagine a kind of experience, a state of being, rather than one person

Ironically, in the Cupboard series of works I refer to a place in Mississippi called Mammy’s Cupboard, which is a restaurant in the form of a mammy, and the skirt is where the patrons would enter to eat. I thought the symbolic violence in this gesture of going in to eat in someone’s skirt was really stunning, and that it symbolically tells a larger story about the experience of black women and femmes. I have been interested in the symbolic parts of that building since I encountered it in an Edward Weston photograph.

Free People’s Medical Clinic, held in a house in Brooklyn, offered HIV and blood-pressure screenings, modern dance, lessons in herbalism, and yoga and massage sessions in an apparent effort to reach out to black women. How did this fit into your art-making?

The clinic, a re-creation of a Black Panther Party initiative, was not intended to reach out to help black women; that was a misunderstanding. It was more a display of the labour of black women and the knowledge of black women who work in forms of knowledge like herbalism that go under the radar because these modes are not easily capitalised upon. The clinic was, rather, to display the work that was already going on in the community—that self-determinative work.

I’ve read that your social projects were also inspired by the United Order of Tents, founded by former slaves.

It’s a 152-year-old organisation of black women—nurses and others who gathered together to support each other. I’ve been very interested in them because of their longevity, and also their secrecy. For me, they represent a style or mode of resistance, which is to do your work without visibility, as opposed to trying to create as much visibility as possible—what many artists strive for. Since encountering them I’ve been thinking about them and other African-American organisations which use secrecy as a way of protecting themselves—for example, the Emanuel African Methodist Episcopal Church in Charleston, where nine people in bible study were shot down. In reaction to Nat Turner’s slave rebellion, in 1834 Charleston outlawed all-black churches; the AME congregation met in secret until the end of the Civil War. I know that that particular church had to go underground for 35 years after black churches were banned in the state. So I think the status of gathering and organising and thinking underground has been an important tool that African-Americans have employed to survive and to thrive.

In 2016, you staged The Waiting Room at the New Museum, which offered free acupuncture classes and massage sessions with a series of health and wellness lectures, blurring the line between bodily and spiritual health.

We created a magazine for the waiting room at the Free People’s Medical Clinic that several scholars contributed to. Naomi Jackson wrote about Esmin Green, who died after trying to check herself into Kings County Hospital: after waiting for 24 hours, she collapsed and died. I just can’t believe that she sat there until she died. The New York Times wrote of the incident: “Waiting may have killed her.” And I think it speaks to a kind of strength and fortitude that’s asked of black women constantly—a kind of strength that is actually a death sentence. When the New Museum suggested a restaging of the work, I decided to focus on the status of waiting: this project became The Waiting Room.

Have you created specific pieces for the Guggenheim show?

I am creating a new body of work, which includes two new bronzes, and also a sound installation that is related to a film I’m making during the run of the show.

Brick House, your installation for the High Line, is a 16-foot-tall bust of a black woman whose torso is conflated with the form of what might be a skirt or clay house. What was it like working at that scale?

I love working at this scale—it has made me so happy. It involves using your entire body and mind in the creation of the work. It’s thrilling.

It forms a stark contrast to its urban surroundings, such as billboard ads.

I thought it might be appropriate to have a sculpture that considers beauty as its subject matter in this setting. I was thinking about representation of a kind of femininity that I’m more interested in: a femininity that’s based on being solid as opposed to fragile, as well as the complex history of art represented in the sculpture. Benin bronzes were a touchstone in the creation of the work.


“It became a platform for which the idea of black pain was taken into consideration and the history of the black body in the US in medicine was taken into consideration, for obvious reasons. But my intention in the work was not to engage in any sense that there was a group of black women that needed my help or support. It was, rather, to display the work that was already going on in the community.”

A Particularly Elaborate Imba Yokubikira, or Kitchen House, Stands Locked Up While Its Owners Live in Diaspora (2016)


A Particularly Elaborate Imba Yokubikira, or Kitchen House, Stands Locked Up While Its Owners Live in Diaspora (2016)
© Simone Leigh; Courtesy of the artist and Luhring Augustine


“This was my first commission to do a public sculpture, which was organised by the Studio Museum in Harlem. My intention was to create structures based on an imba, which is an important kind of building in Shona culture. As I was making those forms in my studio—the maquettes—I really sort of enjoyed the way they were torso-, skirt- and building-like all at once, and I started to combine them with the figurative pieces I was working on.”


Head With Cobalt (2018)
© Simone Leigh; Courtesy of the artist and Luhring Augustine


“Many times I am thinking about disparate histories when working on a single sculpture. In this case I was thinking of a bronze created in 200BC, described as Vase and lid in the form of a Nubian boy, which I encountered in the Rhode Island School of Design Museum, as much as I was thinking of American vernacular art such as face jugs.”

Born in 1967 in Chicago to Jamaican parents, Leigh graduated in 1990 with a major in art and a minor in philosophy at Earlham College in Richmond, Indiana. She lives and works in Brooklyn.

Leigh was artist in residence at Hunter College in New York in 2008-09 and at the Studio Museum in Harlem in 2010-11. In 2014 she presented Free People’s Medical Clinic, sponsored by Creative Time and the Weeksville Heritage Center, in Brooklyn. The Waiting Room was installed at the New Museum in 2016, the same year that Psychic Friends Network appeared at Tate Modern in London and she was the focus of a solo show at the Hammer Museum in Los Angeles. In 2018 she had a solo show at Luhring-Augustine in New York and received the Hugo Boss Prize, administered by the Solomon R. Guggenheim Foundation.