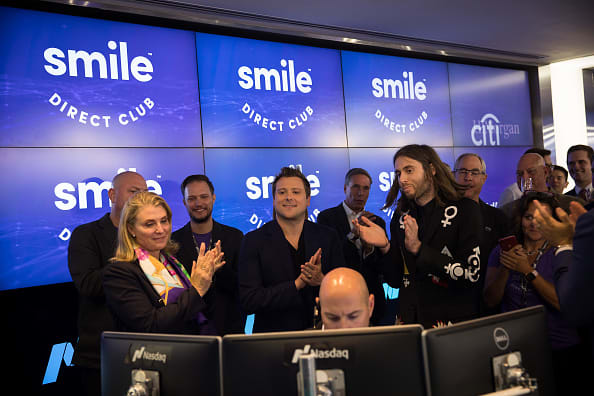 Alex Fenkell, co-founder of SmileDirectClub Inc., center left, and Jordan Katzman, co-founder of SmileDirectClub Inc. center right, celebrate during the company’s initial public offering (IPO) at the Nasdaq MarketSite in New York, U.S., on Thursday, Sept. 12, 2019.Michael Nagle | Bloomberg | Getty ImagesSmileDirectClub rose more than 8% in midday trading Friday, recovering some losses after the company saw its shares plummet 28% during its disappointing market debut Thursday.In it’s first trading day, the teeth-straightening start-up’s shares settled at $16.67 after opening at $20.55. It had priced its initial public offering at $23 per share Wednesday, above the expected range of $19 to $22. That means SmileDirectClub ranks as the fifth worst debut of the IPOs this year.Founded in 2014, the dentistry disruptor sells teeth aligners directly to consumers and in its “SmileShops,” competing with Align Technology. SmileDirectClub also has partnerships with CVS Health and Walgreens Boots Alliance.The company reported sales of $23.2 million last year, up 190% from the year before, while net losses correspondingly doubled to $74.8 million in 2018 from $32.78 in 2017, according to its prospectus filed last month. Notably, one of its largest expenses is marketing and selling, rising $64.2 million in 2017 to $213.1 million last year.