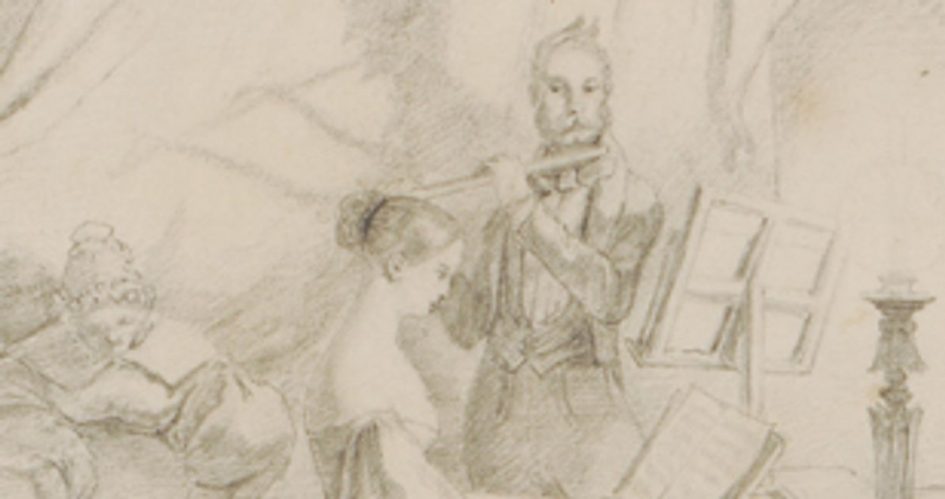 A drawing by Carl Spitzweg that was uncovered in a secret cache of art in a Munich apartment 73 years after it was seized by the Nazis has been returned to the heirs of Henri Hinrichsen, a Jewish music publisher and philanthropist who was murdered at Auschwitz.The drawing was seized by German customs in 2012 in the apartment of Cornelius Gurlitt, an elderly recluse, along with about 1300 other works including paintings by Henri Matisse and Max Liebermann. It is the 14th work from Gurlitt’s collection, which he bequeathed to the Bern Museum of Fine Arts, to be returned to the heirs of the original Jewish owners, the German government said in a statement. “Behind every one of these artworks there is a human, tragic fate, like that of the Auschwitz victim Dr. Henri Hinrichsen,” Culture Minister Monika Grütters said in the statement.The drawing dating from about 1840 depicts a woman at the piano and a man playing the flute in a 19th-century drawing-room. It has been shipped to Christie’s at the request of the heirs, the government statement said. It was seized at Henri Hinrichsen’s home in Leipzig by the Nazis in 1939. Hildebrand Gurlitt, an art dealer who worked for the Nazis, purchased the work after its seizure and paid the money into a blocked account to which Hinrichsen had no access. For many years, the drawing hung in Hildebrand Gurlitt’s widow’s hallway. After her death, it passed to his son Cornelius Gurlitt. Gurlitt died in 2014, two years after his art hoard was seized; the German government and the Bern Museum of Fine Arts have since worked to clarify the provenance of the art. Though the Spitzweg drawing was identified as Nazi loot in 2013, it has taken many years to complete the restitution process. Hinrichsen’s granddaughter Martha Hinrichsen, who was leading her family’s effort to recover the drawing, died in 2016.