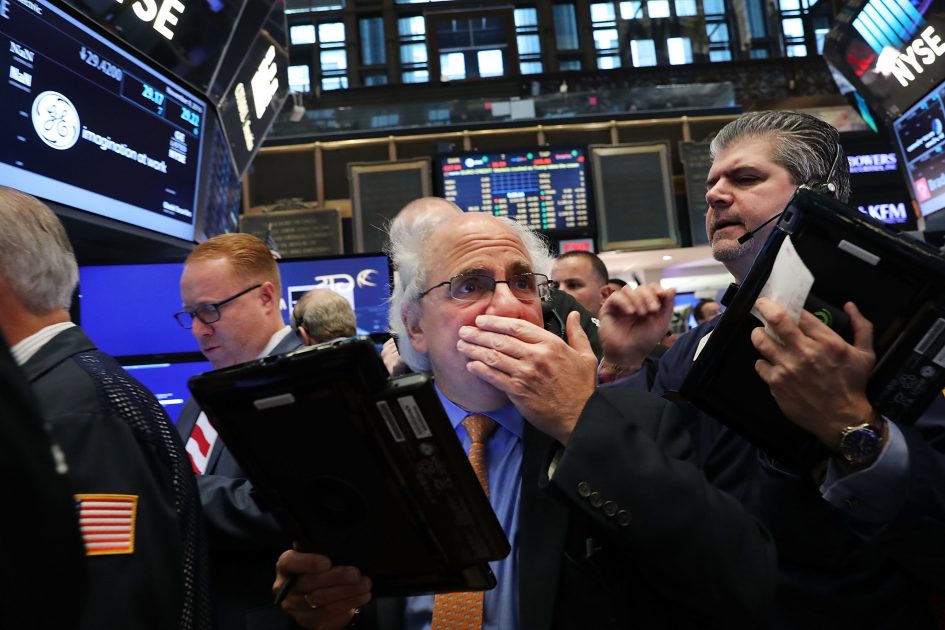 Traders work on the floor of the New York Stock Exchange (NYSE) the morning after Donald Trump won a major upset in the presidential election on November 9, 2016 in New York City.

Microsoft — Microsoft hit an all-time high following the company’s announcement of better-than-expected quarterly results. The company earned $1.37 per share, compared to a Refinitiv estimate of $1.21 per share. The company also beat revenue expectations, pulling in $33.72 billion, compared to a $32.77 billion consensus projection. The company’s strong results were driven by a 39% jump in cloud revenue.

Gannett — Gannet shares soared 20% after the Wall Street Journal reported that the USA Today publisher and GateHouse Media, another newspaper publisher, were in “advanced ” discussions about a merger.

CrowdStrike Holdings — Shares of CrowdStrike climbed 15% after the cybersecurity company released its first quarterly results since its IPO in June. The company’s results were largely in line with estimates. However, its revenue more than doubled on a year-over-year basis.

Citizens Financial — The financial services company reported earnings per share of 95 cents a share, topping an analyst estimate and sending the stock up more than 6%. Citizens’ better-than-expected profit was driven by higher income from fees.

MSG Networks — Shares of MSG Networks slid 5.8% after an analyst at J.P. Morgan downgraded the regional television company to underweight from neutral. The analyst cited weakening subscriber revenue and moved the bank’s price target on the stock to $19 per share from $23.

Capital One Financial — Shares of Capital One rose 2.1% after the financial firm beat second-quarter estimates on the top and bottom lines. On Thursday, the company reported earnings per share of $3.28 on $7.12 billion in revenue. Analysts expected earnings of $2.87 per share and $7 billion in revenue, according to Refinitiv. CEO Richard Fairbank attributed the strong quarter to the success of the company’s ongoing “digital transformation.”

State Street — State Street shares jumped 6.7% on quarterly numbers that topped estimates. The financial services company posted earnings per share of $1.45 on sales of $2.873 billion. Wall Street analysts had forecast a profit of $1.39 per share on sales of $2.865 billion. The company also said its cost-cutting measures are expected to save it $400 million.

Cleveland-Cliffs — The mining and natural resource company’s stock jumped 4% after beating second quarter estimates for earnings and revenue. Cleveland-Cliffs reported $0.57 per share versus a Refinitiv estimate of $0.52 per share. “The New Normal in the global iron ore market has started to influence our results, offsetting weak steel prices in the United States during the second quarter,” CEO Lourenco Goncalves said in a statement.

Medallia — Medallia soared more than 76% on Friday as the software company’s initial public offering led to one of the year’s best debuts. The San Francisco-based company, which creates software to improve customer satisfaction, priced at $21 per share on Thursday night but quickly surpassed $30 per share once trading began.