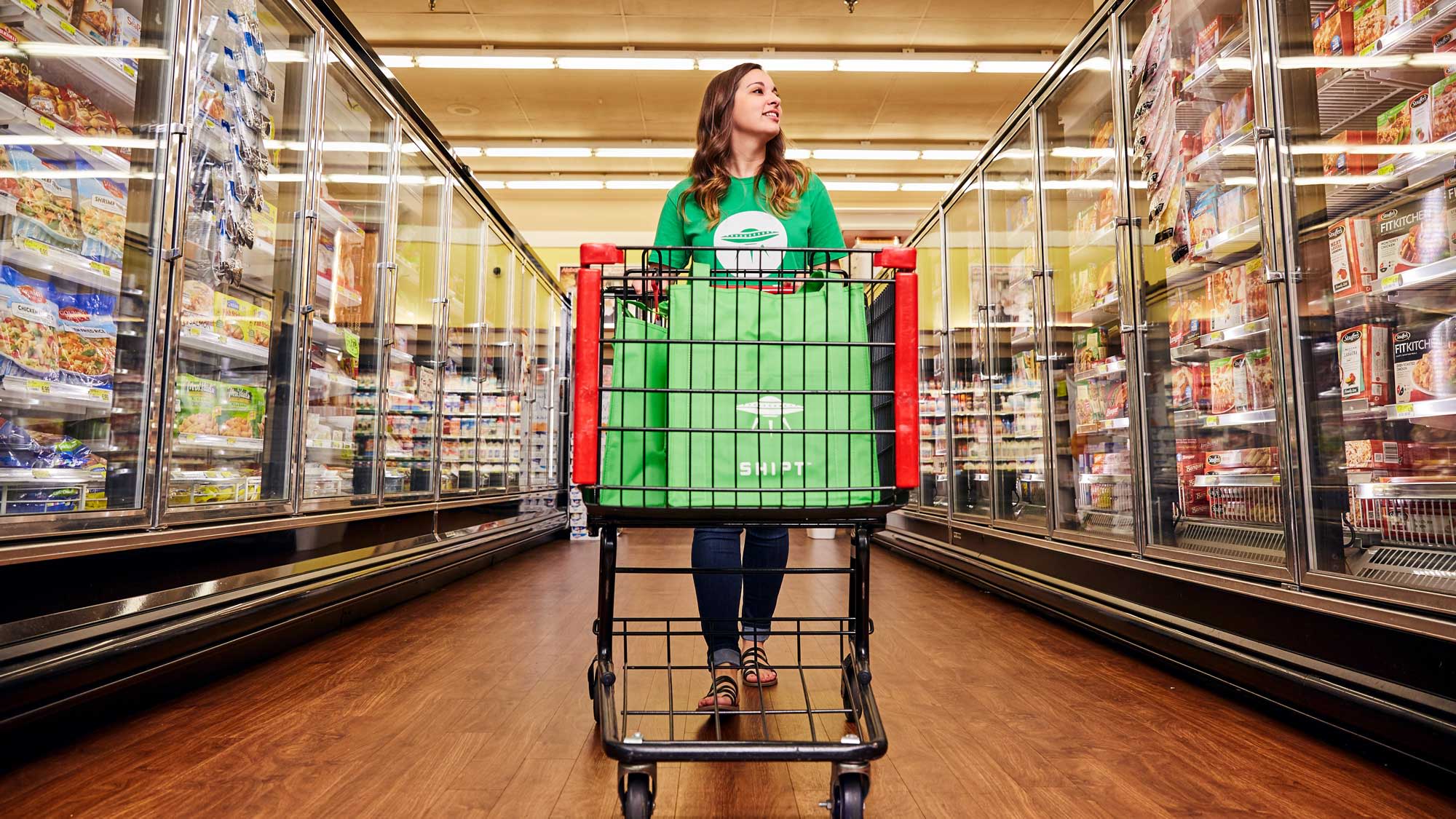 One of Target’s Shipt shoppers fills an online grocery order.

Target is bringing its same-day delivery option to the masses, marking the latest move in an ongoing and heated delivery war involving the big-box retailer, Walmart and Amazon.

Target announced Thursday that shoppers in 47 states across the country will now be able to get items from online orders delivered same day by paying a flat fee of $9.99 per order. It’s leveraging Shipt, a membership-based, same-day delivery platform it acquired for $550 million in 2017, to do this.

Up until now, Target shoppers have been able to get orders delivered on the same day by being a Shipt member, which costs $99 per year. That option is still available for everyone, Target said, but the company is making it easier for people to choose same-day delivery on an order-by-order basis, versus signing up for an annual membership.

Target’s announcement comes amid a flood of activity among internet retailers to get orders to customers as quickly as possible. Both Walmart and Amazon recently announced next-day delivery options, with Walmart promising to reach roughly 75% of American consumers with faster shipping by the end of 2019.

Amazon currently offers its Prime members, who pay a $119 annual membership fee, free same-day delivery for more than 3 million items and for orders over $35. Non-Prime members can have this option by paying an additional $9.98 per item, according to its website. And this is only for “select areas” across the U.S., Amazon says.

Walmart, meantime, is on track to offer same-day delivery for groceries out of a network of 1,600 stores by the end of the year — double what it was back in January. Fees for this option will vary based on location. And this fall, Walmart plans to begin delivering grocery orders inside homes, straight to customers’ refrigerators, in a handful of markets. It still hasn’t disclosed how much extra this service will cost customers.

Now, with Target’s same-day delivery expansion, 65,000 items on Target.com will have the option to be delivered in as quickly as an hour, the company said. Shoppers will be able to use their Target credit cards to pay, which gives them a 5% discount. And it said this same-day delivery option should be incorporated into the Target mobile app before the holidays. It’s currently live on desktop and mobile web browsers.

“With same-day delivery now available directly within the Target.com experience, we’ve made it even easier for our guests to shop at Target,” Dawn Block, senior vice president of Target’s digital operations, said in a blog post.

Since its acquisition of Shipt, Target said the service’s membership base has doubled, and the number of retailers in the Shipt network have doubled. In addition to Target, Shipt still serves companies including CVS, H-E-B and Meijer. Around the holidays, it was employing about 80,000 Shipt shoppers, who help pick, pack and deliver orders from these retailers. It recently said that number has grown to more than 100,000 people.

Target already has been offering other same-day pickup options for online orders through its stores. This includes a free, curbside pickup option at about 1,400 stores, and a free in-store pickup option at all 1,850 Target stores across the U.S. Both options promise orders are ready within an hour.

During the first quarter of this year, Target said that Shipt, curbside pickup and in-store pickup altogether drove more than half of its 42% e-commerce sales growth, and 25% of its same-store sales growth. Sales at stores open at least a year were up 4.8% during the quarter.

The financial benefit of all this for Target is that when customers pick items up in stores, it is 90% cheaper for the retailer than when it has to ship something from a warehouse, the company said.

In testing same-day delivery with a $9.99 fee in nine markets ahead of Thursday’s announcement, Target said basket sizes grew about 10% to 15% on Target.com, compared to when shoppers were having to go through Shipt’s website to get same-day delivery.

Fifty-three percent of consumers said they were planning to place more orders online in 2019 with the intent of picking up those items from bricks-and-mortar stores, according to a survey by Internet Retailer of 1,100 consumers  that was taken just after the 2018 holiday season. About 23% of those polled said they planned to place more orders for same-day delivery.

But with Amazon, Walmart, Target and others all vying to win customers over with speedier services, there’s still some skepticism that all the buzz around same-day, next-day and in-home delivery is here to stay.

“We’ve distorted customer expectations, and it comes at zero cost to the customer,” Sucharita Kodali, a retail analyst at Forrester Research, said in a recent interview. “Other companies … somebody is bearing the cost.”

Ultimately, she said, “I don’t think the customer experience is sustainable. We have to accept slightly less. This means: something like next-day delivery is a short-term burst of excitement … a short-term micro-economic war. At the macro level, it’s not sustainable.”

Amazon, for example, said it would spend $800 million during its fiscal second quarter this year to move toward one-day delivery for Prime members. Target didn’t disclose a cost for its same-day delivery expansion but said more and more customers are actually opting to use its curbside and in-store pickup options, instead of shipping. And as more people do this, Target’s fulfillment costs drop.