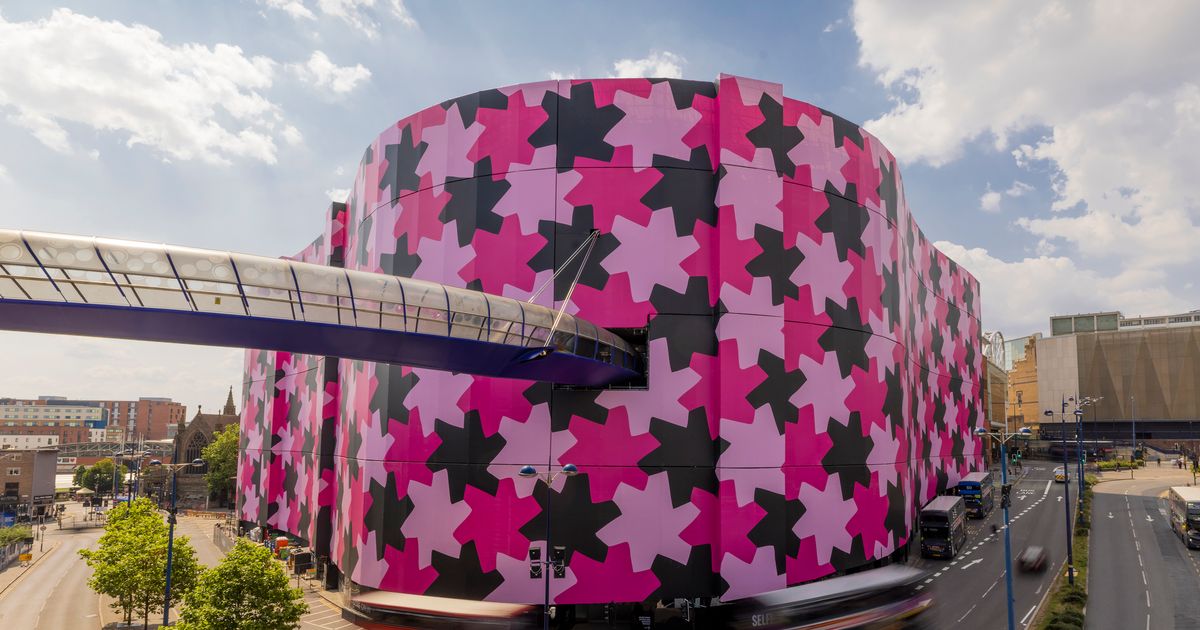 UK artist Osman Yousefzada has wrapped a five-ton canvas around the Selfridges department store in Birmingham, UK, creating one of the world’s largest pieces of public art. The star-like black and pink patterned design Infinity Pattern 1, which evokes the geometric designs of Islamic art, encircles the celebrated retail emporium located in the city’s Bullring shopping centre. In an Instagram post, Yousefzada writes that “the distinctive art work is part of a series of experimentations of tessellated patterns that are reminiscent of the perennial architectural qualities in his work, and also suggest a space without borders”. The new art installation was co-commissioned with local gallery Ikon, who selected Yousefzada following an international competition.

Maryam Wahid’s Women from the Pakistani Diaspora (2018)
Courtesy of the artist. © Maryam Wahid

Ikon director Jonathan Watkins says that the project conveys Yousefzada’s “ongoing preoccupation with the nature of cultural identity, a basic human need for belonging and the experience of migration”. An in-store art trail develops these ideas: a series of self-portraits by local artist Maryam Wahid titled Women from the Pakistani Diaspora shows the artist in her mother’s clothes, reflecting the experiences of migrant women in Britain. Yousefzada’s external covering will stay in place until the end of the year and then be dismantled in stages before the city hosts the Commonwealth Games summer next year. The artist has also collaborated with Selfridges on an exclusive product range—but are art and retail a good mix?

“I like the idea of showing art works off-site in non-dedicated spaces,” adds Watkins. “Some of the pieces also play with the idea of consumerism.” Indeed, sculptural works by Hira Butt, including a bejewelled football (Dhee Rani, 2018), are displayed in vitrines that blend into the store environment. “There is a political proposition but it’s not a jarring visual experience for the viewer. It’s an insinuation,” Watkins says. How visitors will react remains to be seen. “We love the idea of our customers coming across the art trail for instance, and finding inspiration in it, as well as providing guided tours to people interested in additional insight,” says Hannah Emslie, Selfridges’ creative director. She adds: “Collaborating with Osman on a project with such meaning for and connection to the city has been inspiring… We were also determined that the work should have context within Birmingham’s cultural heritage and history, allowing people to make their own connections with it.” Yousefzada grew up in nearby Balsall Heath in a conservative Muslim household (family members can easily spot his public art piece on the city skyline). He told The Observer last year, that people need to know two things about him. “The first is that I am the British-born son of Pakistani-Afghan immigrants who came to the UK seeking a better life for themselves and their children. The second is that my skin tone is brown—brown enough for people throughout the course of my life to hurl a variety of racial slurs at me.” He also designs clothes—Beyoncé collected her 2013 Grammy award in an Osman jumpsuit—and is due to start a doctorate at the Royal College of Art in London later this year. Crucially, he will collaborate with Ikon again on the third Migrant festival (19-22 August), which celebrates the contribution made by refugees and migrants to Birmingham and the UK.