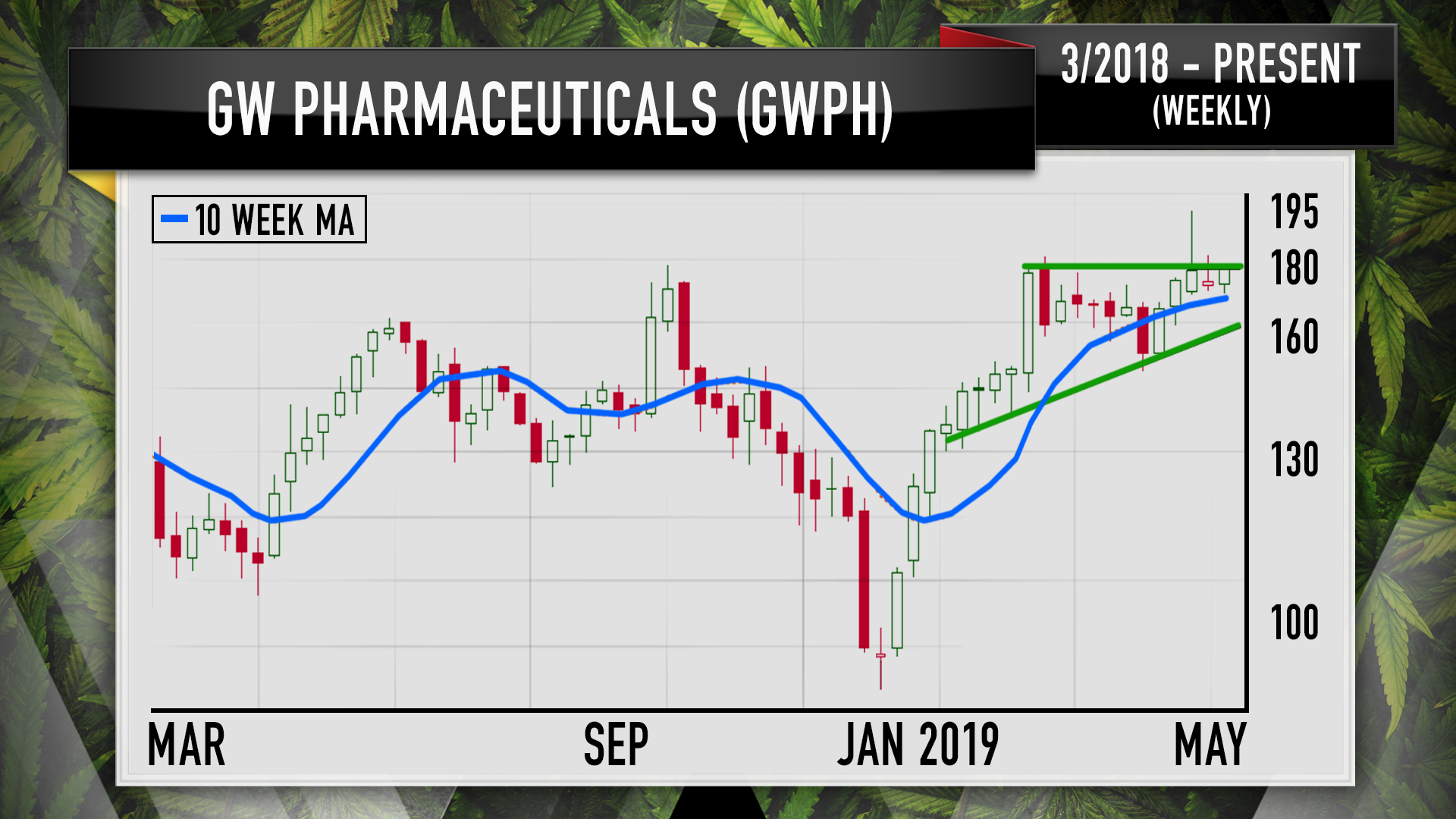 CNBC’s Jim Cramer said Tuesday it appears that cannabis companies could be seeing some “meaningful differentiation.”

He took a look at the chart patterns of stocks in the sector as interpreted by Tim Collins, a technician and Cramer colleague at RealMoney.com.

“The charts, as interpreted by Tim Collins, suggest that GW Pharma and Village Farms are buys here, ” the “Mad Money” host said. “Cronos [Group] could work its way higher, although that one’s more risky. “

Cramer pointed out an ascending triangle pattern in GW Pharma’s weekly chart, which measures the stock’s price movement over a week-long period. That particular pattern, which is made up of a series of higher lows and relatively similar highs, typically tells a bullish tale.

He noted that GW Pharma does not see itself as a cannabis play, but investors see it as such because its products are inspired by the plant.

Collins, Cramer said, is arguing that the stock could be able to surge to $200 if the share price ends the week above $180. It closed Tuesday at $184. If the stock instead falls under $160, then forget about it.

“I think you should stick with Canopy Growth, and Collins believes that GW Pharma is the best bet out there,” the host said.

Get his full insight here

Chinese Vice Premier Liu He (R), US Treasury Secretary Steven Mnuchin (C) and Trade Representative Robert Lighthizer pose before they proceed to their meeting at the Diaoyutai State Guesthouse in Beijing on May 1, 2019.

Tuesday’s stock market action is an indicator of what could come if the United States and China strike a trade deal — even if it’s a bad one, Cramer said.

“Today’s rally was a reminder that if we do get any breakthrough in the trade talks whatsoever, you’re going to get an epic rebound” thehost said. “Today may smack more of fantasy than of fact, but now you know what the market would feel like if President [Donald] Trump and the Chinese Communist Party can find a way to bury the hatchet. “

Novartis is entering “an exciting growth phase” as the pharmaceutical company prepares for a series of blockbuster launches this year, CEO Vasant Narasimhan told CNBC Tuesday.

“It’s a pretty exciting moment because I can’t remember a time at Novartis where year after year after year we have these significant medicines getting launched,” Narasimhan said in a sit-down interview Cramer.

Novartis has a number of drugs in the pipeline. The Swiss-based manufacturer in recent months received federal approval for Mayzent to treat multiple sclerosis and RTH258 to treat eye disease. The company is also gearing up to roll out Zolgensma for gene therapy this year, Narasimhan said.

Shares of Trex, the wood-alternative manufacturer of outdoor decking, took a “sizeable hit” after shareholders learned that a new product the company introduced had a “tough start” in the first quarter, CEO Jame Cline told Cramer.

That cost the company $10 million in pre-tax dollars, he said.

“We told [investors] that it was gonna take another quarter to work our way through that,” Cline said. “In the second half, we predicted that we’d make that up and end up with incremental margins by the full-year end.”

While there was an issue with the product roll out, Cline confirmed that overall demand was not an hindrance to the company.

“One of the challenges is there was more demand than what we had anticipated,” he said.

Cramer said that there is a shortage of buyable stocks on the market.

“When I say buyable, I mean stocks that’ll let you, kind of, sleep comfortably at night, or at least take a light nap,” th host said.

Cramer reviewed which segments of the market money managers fear right now — the sectors he has framed, at least temporarily, as the “forbidden city of stocks.”

Cramer’s lightning round: McDonald’s is ‘one of the greatest stocks of our time’

In Cramer’s lightning round, the “Mad Money” host zipped through his thoughts about caller stock picks.

Nektar Therapeutics: “Nektar’s pretty good. The problem is that group is so bad, it is a total spec on oncology and pain. Why not own Novartis. That’s not a spec. You’ve got growth and you’ve got yield. How can you beat that? “

McDonald’s Corp.: “Intel, not so great. I don’t feel it there. Exxon, I don’t like the fossil. McDonald’s is one of the greatest stocks of our time, and I pounded that thing every time it is down. And do you think that Mr. [CEO Steve] Easterbrook has come on this show? I have had McMuffins, I’ve had Big Macs and fries. It has meant nothing, nothing to Mr. Easterbrook. Until he comes here, I’m just gonna keep recommending his stock. “

The US ‘changes its mind so often’
McDonald’s is a top stock of our time
To Top
error: Content is protected !!
Top