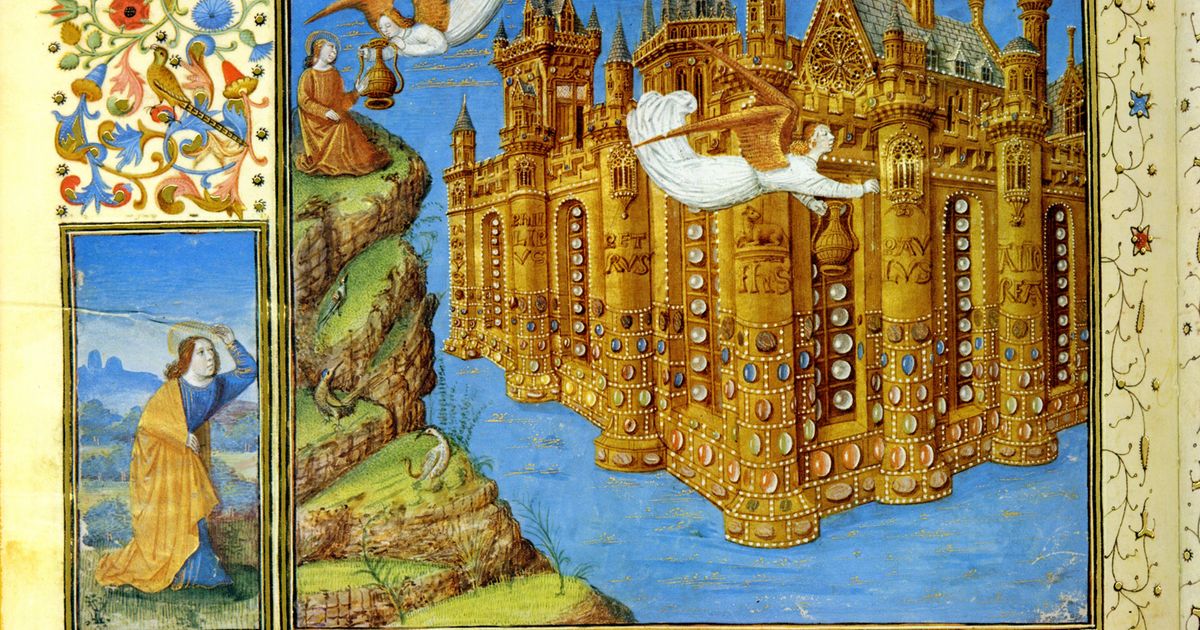 The Heavenly Jerusalem was believed to be studded with precious stones, as in this miniature of around 1485 by Jean Colombe in his Apocalypse of the Duke of Savoy

One might think that, after the many studies published over the past 50 years about coloured marbles in architecture, there would be no need for a new work on the subject. Painting in Stone: Architecture and the Poetics of Marble from Antiquity to the Enlightenment by Fabio Barry has made me completely change my mind. It is immediately evident, from the bibliography to the structure of the index, from the layout of the chapters and images, that this is a book based on a deep study of the science and cosmology of the centuries prior to the 18th century; that is, before the beginning of the science of geology as we know it now. Barry has also spent years looking at Rome and around the Mediterranean, years during which he has accumulated an impressive knowledge of works of art and architecture, penetrating, as it were, beyond the surface of the ancient stones.For us more conventional architectural historians, his novel approach to the subject is a shock. We are not used to seeing this rough material in terms of the divine, the transcendent and the supernatural. Reading Barry, we discover that in ancient science the colours and variegations of ancient marbles were seen as examples of God’s hand at work. Is it therefore the divine that has created such beautiful and complex matter, or is it this matter that has helped mankind to understand and illuminate the divine? Is it the light that lights up the marble or is the marble the astral light that illuminates us?

Ancient natural philosophy believed this marble to be “frozen sea”, so the floor of Hagia Sophia in Istanbul, 6th century, has the Faithful “walking on water”, with God’s throne, the altar, “set above the waters”
Photo: © Fabio Barry

Painting in Stone answers these questions and unveils many mysteries, from dynastic Egypt to Mesopotamia, from Mycenae to Olympia, from Pella to Delos, from Rome to Pompeii in the classical period, through Constantinople to the Western Middle Ages, the Renaissance and, finally, the baroque with its cloud architecture.Barry closes with some reflections on the English sculptor Stephen Cox whom I met in Egypt in 1988. You do not usually meet anyone in the Egyptian Eastern desert, but that year, on Mons Porphyrites, I came across Cox, who, like me, was looking for the Roman imperial porphyry, which he turned into modern sculptures for the Cairo opera house.I have only two questions for Barry after reading Painting in Stone. The first is, why does such a poetic narrative become so technical from time to time? Why does he call his beloved alabaster calcite or travertine, or the magical “Granito della Colonna” pegmatic diorite?

The 1535 Dell’Acqua altar in Vicenza Cathedral is made up of many different marbles and hardstones that for the patron had meaning, as described in the lapidary De Harmonia Mundi of 1525
Photo: Fabio Barry

The second is, why did he not devote more space to the magical, esoteric and poetic period of the Middle Ages when the Cosmati workshop reused Roman coloured marbles to make their stone mosaic floors, which survive in hundreds of examples from the north to the south of Italy. He does, however, describe and fully interpret the only Cosmati floor in Britain, that of Westminster Abbey, created by Odoricus in 1268 with Roman and English marbles. In short, this book overturns the generally held concept of coloured marbles as merely an expression of classical luxury and raises them to the poetics of cosmology and philosophy of nature. • Fabio Barry, Painting in Stone: Architecture and the Poetics of Marble from Antiquity to the Enlightenment, Yale University Press, 448pp, $65, £50 (hb)