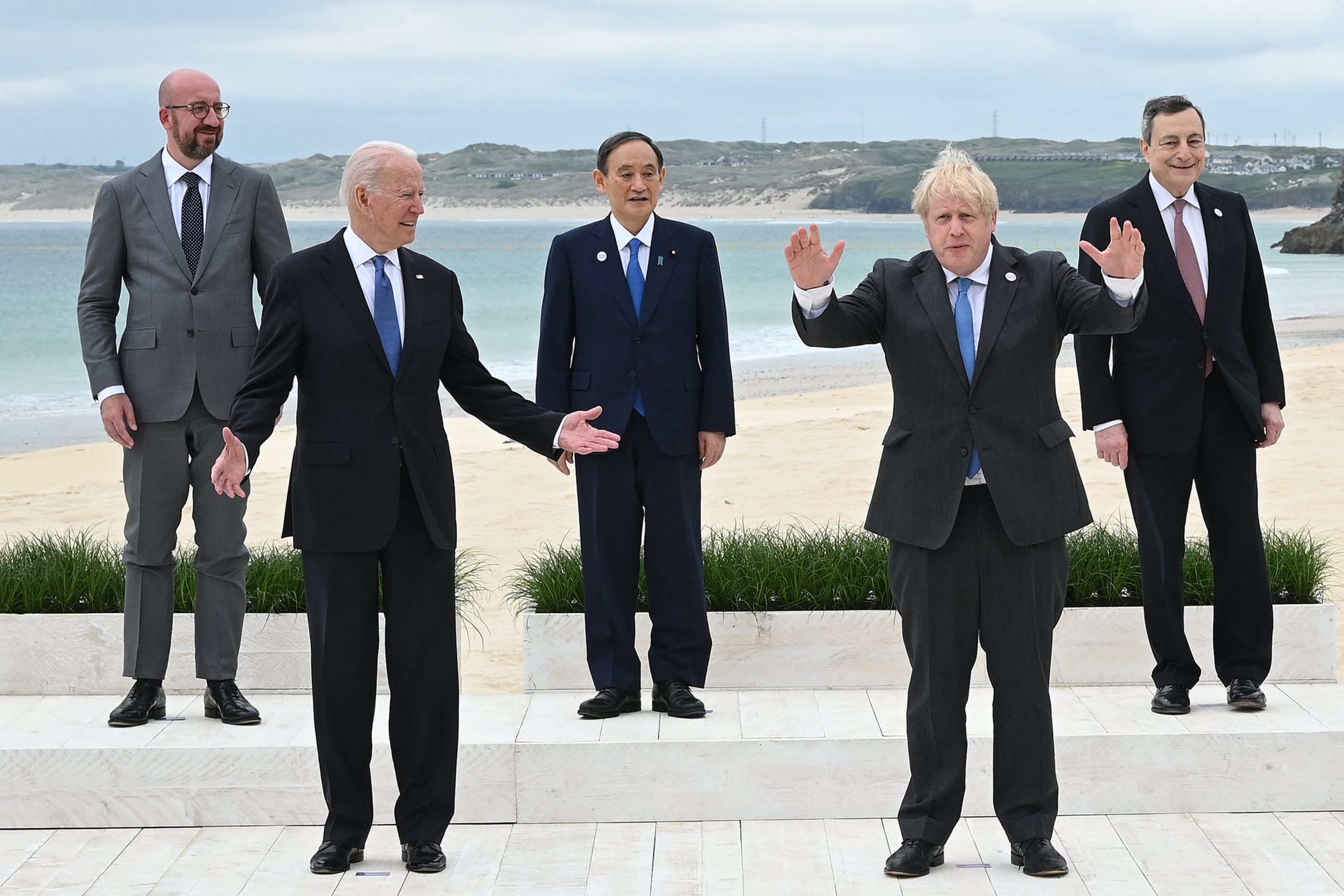 (L-R) President of the European Council Charles Michel, U.S. President Joe Biden, Japanese Prime Minister Yoshihide Suga, British Prime Minister Boris Johnson and Italian Prime Minister Mario Draghi pose for the Leaders official welcome and family photo during the G7 Summit In Carbis Bay, on June 11, 2021 in Carbis Bay, Cornwall.Leon Neal | Getty Images News | Getty ImagesLONDON — A three-day meeting between the leaders of some of the world’s richest nations was nothing short of a failure, according to some economists and campaigners, who argue the group fell short of its own standards to agree on comprehensive action to tackle the climate crisis and Covid pandemic.The leaders of the G-7, a group of the world’s largest so-called advanced economies, issued a joint statement Sunday promising to enact measures on Covid vaccines, China and global corporate tax.After meeting at the English coastline resort of Carbis Bay in Cornwall, the leaders promised to secure 1 billion more vaccine doses over the next 12 months either directly or via the World Health Organization’s COVAX organization.Sunday’s communique also called on China “to respect human rights and fundamental freedoms, especially in relation to Xinjiang and those rights, freedoms and high degree of autonomy for Hong Kong enshrined in the Sino-British Joint Declaration and the Basic Law.”The G-7 pledged to wipe out their contribution to the climate emergency, reaffirming their commitment to reach net zero greenhouse gas emissions by 2050 and vowing to eliminate most coal power. It also backed a minimum tax of at least 15% on large multinational companies to stop firms from using tax havens to avoid taxes, an initiative led by the U.S.The announcements were heralded as significant by groups including COVAX and the Confederation of British Industry, the latter of which said the summit had “reignited a belief that the international community can come together in a spirit of collaboration to tackle the big issues of our age. “But critics say the promises were not new, lacked in detail and some were plainly insufficient.”G7 leaders have utterly failed to face up to the challenges facing the world,” said Nick Dearden, director of campaign group Global Justice Now. “After a weekend of diplomacy all they have done is repeat their own inadequate climate targets and fail to meet their own inadequate targets for global vaccination.””This G7 has been a pointless exercise in grandstanding without making any substantive progress towards tackling the crises of our lifetimes. This summit proves beyond all doubt that the G7 is not fit for purpose,” Dearden said.The Group of Seven is comprised of the U.K., Canada, France, Germany, Italy, Japan, and the U.S. The EU, which sends the presidents of the European Commission and the European Council, also attends. Australia, India and South Korea were also invited this year.’Cracks are still there’The summit had been seen as a golden opportunity for policymakers to meet in person and agree on the necessary action to tackle some of the most pressing global issues, such as the coronavirus and climate crises.The communique did not set out a detailed country-by-country commitment or a timetable to act on the global vaccination campaign, and many of the commitments had been agreed in advance.In a note Monday, Paul Donovan, chief economist at UBS Global Wealth Management, referred to the G-7 as a “selfie summit.””The main focus of the G7 meeting (the photo opportunity) seemed to go well. The rest of the meeting expertly papered over the cracks in opinion,” he wrote.Speaking to CNBC’s “Squawk Box Europe,” Donovan added: “We haven’t had the same sort of direct, big impact. We have had lots of vague statements.””The cracks might not be so deep this time because of the change in leadership in the United States and the fact that the U.S. is playing a more active role, but the cracks are still there,” he said.Extinction Rebellion (XR) activists take part in the “Sound The Alarm” march during the G7 summit in Cornwall on June 11, 2021 in St Ives, Cornwall, England.Jeff J Mitchell | Getty Images News | Getty ImagesThe world’s richest countries have been sharply criticized when it comes to vaccine access amid the pandemic.Many groups have been pushing for the waiving of certain intellectual property rights on Covid vaccines and treatments, including the WHO, health experts, former world leaders and international medical charities.India and South Africa jointly submitted a proposal to the World Trade Organization in October, calling for the need for policymakers to facilitate the manufacture of Covid treatments locally and boost the global vaccination campaign.Several months on, the proposal has been stonewalled by a small number of governments — including the EU, U.K., Switzerland, Japan, Norway, Canada, Australia and Brazil.Success of COP26 ‘hangs in the balance'”We’ve heard warm words about a green Marshall Plan and ambitions to vaccinate the world, but this falls well short of what’s needed,” said Patrick Watt, director of policy, public affairs and campaigns at British charity Christian Aid.”This is a partial plan not a Marshall Plan,” Watt said, arguing the G-7 leadership failed to make real progress on aid promises, comprehensive debt relief, climate finance and “vaccine apartheid.””The success of the COP26 climate summit now hangs in the balance. There is still time for rich nations to deliver a solidarity package that tackles these interconnected crises. Without it, the COP will fail.”Policymakers are under intensifying pressure to deliver on promises made as part of the landmark 2015 Paris Agreement ahead of this year’s COP26, due to be held in Glasgow, Scotland, in early November.

GM, Ford are all-in on EVs. Here’s how their dealers feel about it
India’s ambitious vaccine targets alone will not help immunize its massive population
To Top
error: Content is protected !!
Top