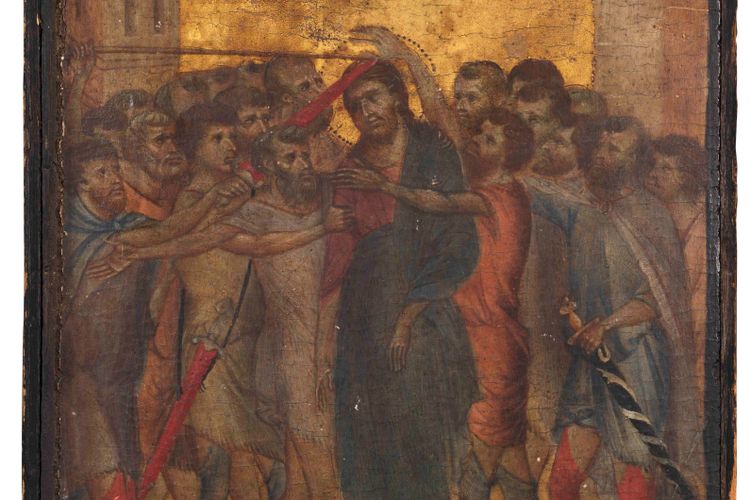 His is the first biography in Vasari’s Lives of the Artists and he even gets a mention in Dante’s Divine Comedy: “Cimabue thought to lord it over painting’s field; and now the cry is Giotto’s and his name eclips’d.”The late 13th century Florentine artist Cenni di Pepo, known as Cimabue (active 1272-1302),is widely recognised as the father of Western painting, but no autograph work by him has been sold at auction for as long as anyone in the art trade can remember. So plenty of attention will be focused on the northern French city of Senlis on 27 October when a small 10 inch high panel painting of the Mocking of Christ, thought to be by Cimabue, is scheduled to be auctioned by Actéon, estimated at €4m-€6m.The unsigned tempera on poplar panel was discovered in June by the auctioneer Philomène Wolf during a house clearance in the nearby town Compiegne. “It was considered special by the family, but they thought it was an icon,” Wolf says. “I am so lucky. I am at the beginning of my career, and you can wait an entire lifetime before making such a discovery.” Subsequent research by the Paris-based old master expert Eric Turquin, who will be selling the work in collaboration with Actéon,has hailed the painting as “the only small-scale work of devotion that has been recently added to the catalogue of authentic works by Cimabue.”Turquin believes the newly discovered Mocking of Christ was part of a small polyptych by Cimabue that also included the Flagellation of Christ and the Madonna and Child Enthroned between Two Angels, respectively bought by the Frick Collection in New York in 1950 and the National Gallery in London in 2000. Cimabue’s exquisite Madonna had been due to be auctioned at Sotheby’s, but was acquired for the nation by private treaty for about £7.2m just before the sale. The pre-auction estimate had been £10m, according to Artnet.But why is the Paris expert so sure this unsigned discovery is by Cimabue?“You can follow the tunnels made by the worms,” Turquin says, pointing out that the polyptych had been sawn down its centre, exposing the centuries-old tracks made by timber-eating larvae. All three panels have similar patterns of worm holes. “It’s the same poplar panel,” Turquin adds. “We have objective proof it’s by the artist.”At the time of writing, the discovery had yet to be viewed by leading scholars and museum curators specialising in early Italian painting, who could endorse the attribution.But will it actually be sold at auction? In June, a recently discovered painting of Judith and Holofernes attributed to Caravaggio was estimated to sell for as much as €100m at the Toulouse rooms of Marc Labarbe, who also collaborated with Turquin. The auction was cancelled at short notice after the work was sold privately, reportedly to the American billionaire collector J. Tomilson Hill, for an undisclosed price, thought to be nearer the reserve of €30m.However, Wolf insists: “It will be sold only at auction. It’s going to be the first public result for Cimabue.”