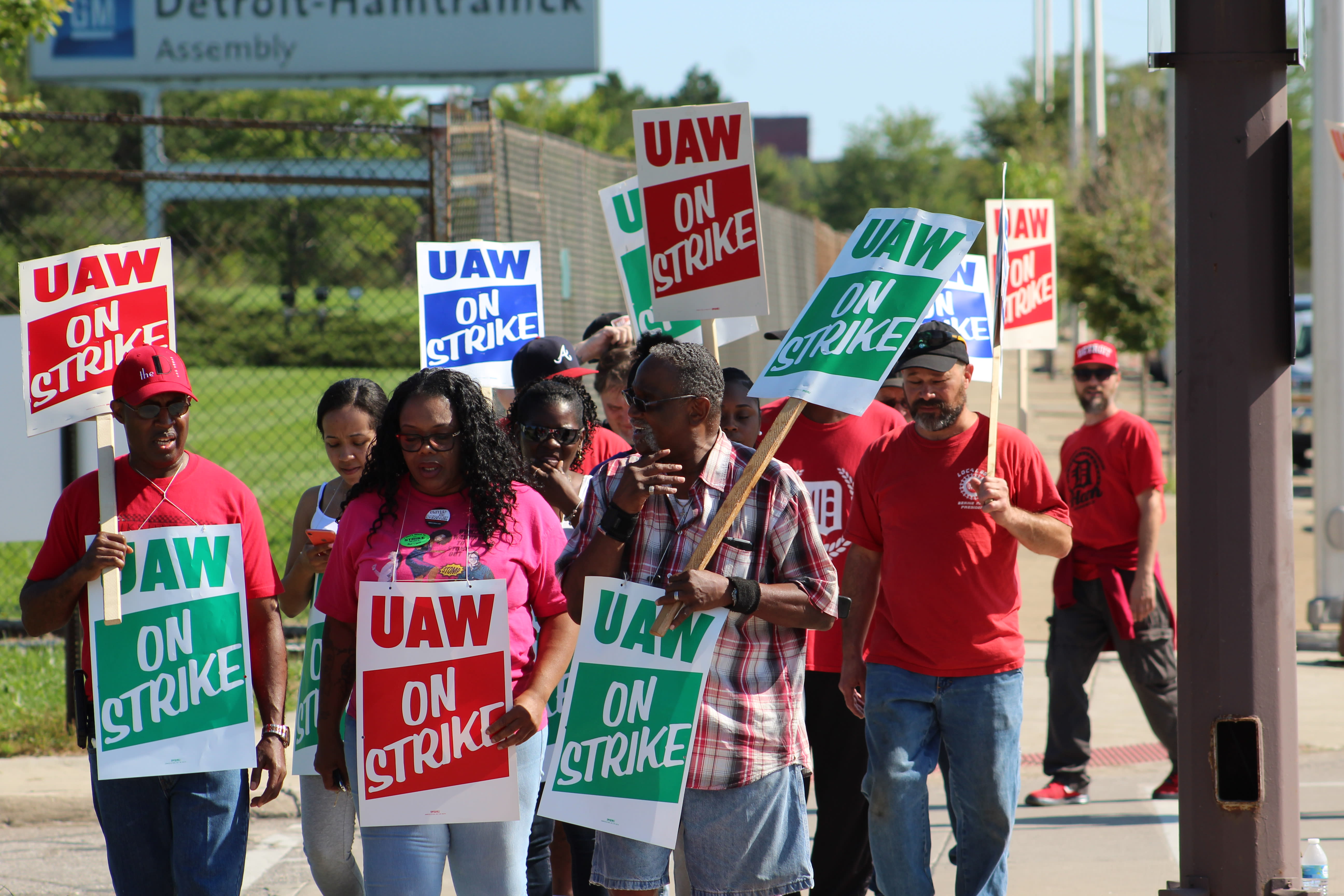 United Auto Workers members on strike picket outside General Motors’ Detroit-Hamtramck Assembly plant on Sept. 18, 2019 in Detroit.Michael Wayland / CNBCDETROIT — Thousands of Canadian auto industry workers have been furloughed, with more temporary layoffs coming, as negotiations on a new labor contract between General Motors and the United Auto Workers drags into a fifth day.Jerry Dias, president of Canadian trade union Unifor, which represents GM and other auto workers in Canada, said in an interview Friday that roughly 4,500 of his members have been temporarily laid off because of the strike so far. He said that includes about 2,500 workers at GM’s Oshawa Assembly plant in Ontario, Canada, and 2,000 people who work for GM’s suppliers.The suppliers are “getting clobbered,” Dias said, adding non-unionized plants are being affected as well.Roughly 48,000 UAW members with GM have been on strike since Monday after the two sides failed to reach a deal by a Saturday night deadline. It is the union’s first national strike against the automaker since a two-day work stoppage in 2007.The strike at GM’s U.S. plants has disrupted operations at the automaker’s other facilities as well as at some of its suppliers. While GM wouldn’t confirm Dias’ numbers, the company said Friday that it has fully idled production at the Oshawa plant and temporarily laid off 2,000 workers there. The automaker initially said it furloughed roughly 1,200 workers at the plant earlier this week, but it has since revised that number higher and expanded the temporary layoffs at the Oshawa plant.”We plan to resume these operations as quickly as possible upon resolution of the UAW strike,” GM said in an emailed statement.According to Dias, GM plans to temporarily lay off 700 additional workers at the company’s St. Catharines, Ontario, plant on Monday and will “re-evaluate” production at its CAMI plant in Ontario next week, depending on the length of the strike.GM spokesman Dan Flores declined to comment on the automaker’s plans next week, saying the company is “monitoring the situation on an ongoing basis.”GM makes engines at St. Catharines and the Chevy Equinox at the CAMI plant. The Oshawa Assembly plant makes the Chevrolet Impala and Cadillac XTS, both of which are scheduled to be discontinued, as well as some pickups that are also being phased out.It’s unknown how many workers at suppliers in the U.S. have been affected by the strike. Flores said the company knows the strike is “impacting a variety of our stakeholders, including our suppliers,” but he declined to speculate on how many workers have been affected.GM said other operations in Canada, including the CAMI assembly plant, stamping operations in Oshawa and St. Catharines powertrain plant continue to operate.Dias said the Canadian union members support the UAW’s strike against GM, even though it’s costing them work.”People are very supportive. People are furious with General Motors here in Canada, just like they are in the United States,” he said, referring to the automaker’s plans in November 2018 to potentially close up to four U.S. plants and one in Canada. “People feel betrayed.”The potential plant closures for the U.S. were among the major sticking points for the UAW’s negotiations with GM. Other issues have included GM’s use of temporary workers, wages and health-care contributions.Analysts at Citigroup earlier in the week said suppliers with the biggest exposure include American Axle, Magna, Lear and Aptiv. Representatives with those companies did not immediately respond to requests for comment from CNBC. Nexteer Automotive, which makes steering components, informed workers at a plant near Saginaw, Mich. on Wednesday that it would be temporary laying off some of its workers due to the GM strike, according to a social media post from a local union official. “We will continue to monitor the situation and work to minimize the impact to our employees,” wrote UAW Local 699 President Tom Hurst. “Our goal is to return to full production as quickly as possible. We will also continue to update employees if the situation changes or as we learn more.”Neither Hurst nor Nexteer immediately responded to requests for comment.Continental, which supplies tires and other products to several GM plants, said it hasn’t been impacted yet. But it’s monitoring “the situation and will adjust our production schedules in accordance with the customer releases depending on the duration of the strike,” according to an emailed statement from the German auto supplier to CNBC.The strike is estimating to cost GM up to $100 million a day, according to Wall Street analysts. But it’s had little impact on the company’s shares so far. While the company’s stock has fallen by about 3% over the last week, it’s up by about 13% so far this year at about $38 a share.  UAW Vice President Terry Dittes, in a letter to members Thursday, said “some progress has been made” in the negotiations, “but there are still many of our memberships’ issues that remain unresolved.” He said negotiators will continue talks “this weekend and beyond,” if needed.”This strike is for all the right reasons: to raise the standard of living of our members and their families and for workers across this country, to achieve true job security, our fair share of the profits, affordable health care and a path to permanent seniority for temporary workers,” he said in the letter.