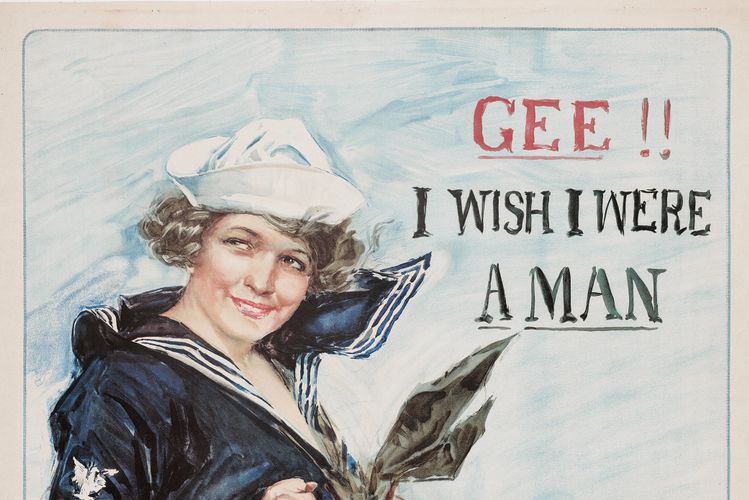 
Gee!! I Wish I Were a Man—I’d Join the Navy, a poster by Howard Chandler Christy from around 1917–18, is one of the archival materials on show in the Museum of Fine Art, Boston’s Gender Bending Fashion show
Photo: © Museum of Fine Arts, Boston


As Pride month kicks off in the US, check out the full spectrum of the fashion rainbow at the Gender Bending Fashion exhibition on at the Museum of Fine Arts, Boston (until 25 August). Looking at how the boundaries of style have been pushed in the past century, the show includes around 60 contemporary designs as well as lots of 20th-century pieces and photographs to show the history of ground-breaking clothing. The often-extravagant costumes are accompanied by a dramatic exhibition design from the in-house architect Chelsea Garunay—black walls, flashes of neon colours and angular platforms create a club-like vibe. Designers included range from stalwarts like Jean Paul Gaultier and Yves Saint Laurent to young stars like Christian Siriano, Alejandro Gómez Palomo and Alessandro Trincone. But, as with all good fashion exhibitions, this show goes beyond the clothes: it talks about how gender roles in society have shifted in the past 100 years and current efforts towards LGBTQIA+ rights equality.

The beautiful, quirky Isabella Stewart Gardner Museum has been hosting artists in residence—who now work in a space above its greenhouse of luscious plants and flowers—since 1992. The pioneering video and performance artist Joan Jonas spent time in the Boston museum’s apartments in 2017 and spent her time exploring the eclectic collection for images of animals. For her show I Know Why They Left (until October 2019) she found creatures—both mythical and real—all over the museum, from unicorns in needlepoint embroideries and frolicking bunnies in tapestries to lions carved in stone. “Finding all those animals was amazing,” Jonas says. “There were many more that I didn’t draw. But what I learned in the process was how important animals were, not just to humans, but also to artists.” Jonas photographed the pieces she came across and has made a collection of 55 drawings from them, shown now in the museum alongside a small cabinet of animal-related pieces from her personal collection. She has also produced a striking site-specific drawing on the museum’s façade called Blue to Blue—a huge fish inspired by her research at the nearby New England Aquarium.

Cool down this weekend with a quick splash in Boston’s newest permanent public installation, Nicole Eisenman’s Grouping of Works from Fountain (2019). Located in the Fenway area, the installation is based on Eisenman’s well-known piece for Germany’s Skulptur Projekte Münster in 2017, Sketch for a Fountain. The work features three bronze figures of indeterminate gender lounging around a rectangular pool, each with water elements. “My hope is that families and nannies that live in the neighbourhood will bring their kids there. I love how children activate this sculpture,” says Eisenman. The sculpture has been commissioned by the real estate company Samuels & Associates, which is redeveloping around 4m sq ft. of real estate in the neighbourhood. The piece sits in the new one-acre 401 Park and is next to a soon-to-open Time Out Market for pop-up food outlets.