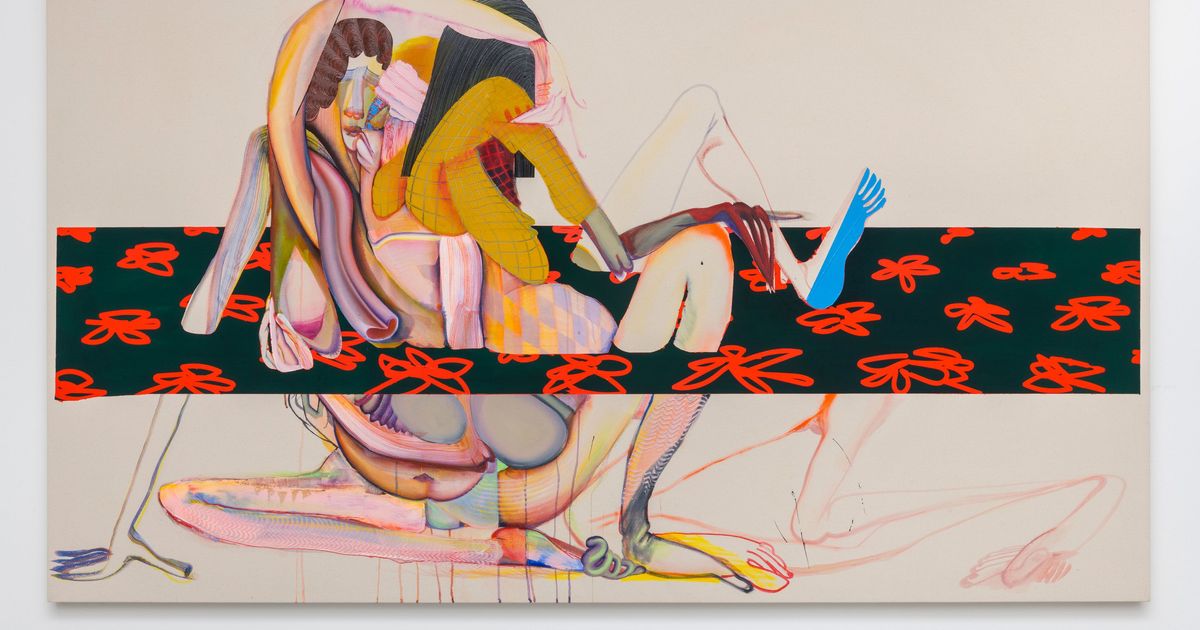 Christina Quarles, For a Flaw/For a Fall/For the End (2018)
Courtesy of the artist and Pilar Corrias, London. Photo: Damian Griffiths

Christina Quarles: In LikenessUntil 29 August, South London Gallery, 65 Peckham Rd, SE5 8UHMore than a year after it was originally scheduled to run, Christina Quarles’s solo exhibition of recent paintings and new drawings opens at the South London Gallery this week. It is the Los Angeles-based artist’s first show in an institution in the UK capital. The works bookend the coronavirus pandemic. Quarles has described her paintings as a kind of portraiture, of what it means to live in a body rather than look at one, and her fractured, fluid figures often embody a spectrum of identities—both male and female, self and other. “I’m interested in these ideas of how to depict what it is to be in a gendered, racialised or queer body, and how my feelings and experience of these aspects of my identity aren’t necessarily a static image,” she says.As such, all eight paintings on show in London use framing devices or architectural components to express a tension between what is interior and what is exterior. Curly privet hedges make an appearance in Sumday (We Gunna Rest on) Sunday (2019) and Casually Cruel (2018), acting as boundaries that can also be seen through or transgressed. The latter work was painted over the summer of 2018, as horrific stories about the separation of children from parents at the US-Mexico border were dominating the media. Orange checkerboards and dogtooth patterning cut through other paintings. The series of drawings on display, each of which convey a sense of being hemmed in, relate in some aspects to life in lockdown. In one, Well Enuff, a figure gazes out of a window at a mountain in the distance, their eyeball extended to cartoonish proportions.

Matthew Barney: Redoubt / Igshaan Adams: Kicking DustUntil 25 July, Hayward Gallery, Southbank Centre, Belvedere Rd, London SE1 8XXThe fabled Cremaster creator Matthew Barney and the emerging South African artist Igshaan Adams go on show in this absorbing two-hander at the Hayward Gallery. Barney ventures deep into the mountains of the American West in his foreboding new film Redoubt, which retells the ancient legend of Diana and Acteon as a contemporary ballet. Filming in the Sawtooth Mountains of Idaho, where he grew up, Barney presents a world where wolves share the landscape with a few humans in a film that lasts two hours and 14 minutes (we advise you bring a cushion). Redoubt, a term for a military fortification, is associated with the American survivalist movement; here the American wilderness presented is a retreat for those fearing the apocalypse. Adams meanwhile takes us on a gentler journey, centred on “the imprints that we collectively leave behind as we move through spaces, both private and public”. This display is dominated by hanging sculptural “dust clouds” fashioned from wire and beads that float above delicately woven textiles.

Mohamed Bourouissa: HARa!!!!!!hAaaRAAAAA!!!!!hHAaA!!!Until 1 August, Goldsmiths CCA, St James, SE14 6ADThis survey show of the Algerian-French photographer and sound artist Mohammed Bourouissa takes its title from the invented word “hara”, used by Arab drug dealers in Marseille to warn of approaching police. The word rings out from speakers placed around the open air terrace of Goldsmiths CCA, surrounding the viewer in spoken language that is extremely charged, yet nonsensical. As this show attests, the impulse to both expand and complicate our understanding of peripheral classes is central to Bourouissa’s practice, through which he examines the immigrant experience and the racial and post-colonial dynamics that underpin it. Ranging from 2003-2020, the works include Bourouissa’s 2006-2008 photography series Péripherique, which won him last year’s Deutsche Börse Prize. Depicting life in Paris’s deprived suburbs, they show drug deals, burning cars and tracksuited youths to pierce the idea of the pristine and white city that exists in our popular imagination. A similar intervention is made via an 18-minute-long film Horse Day (2014-15). It shows a rodeo organised by a group of Black horse stable workers in North Philadelphia and addresses the whitewashing of the cowboy (many of whom were Black, Latino and Native American) in Hollywood cinema. Creating a contemporary American Western movie that is romantic, defiant and unexpectedly funny (many of the horses are painted in lurid patterns and colours) Bourouissa reframes the USA as jointly conquered, and jointly owned, by all Americans.

Driehaus Museum in Chicago reactivates an ornate historic auditorium for the arts
Three exhibitions to see in New York this weekend
To Top
error: Content is protected !!
Top