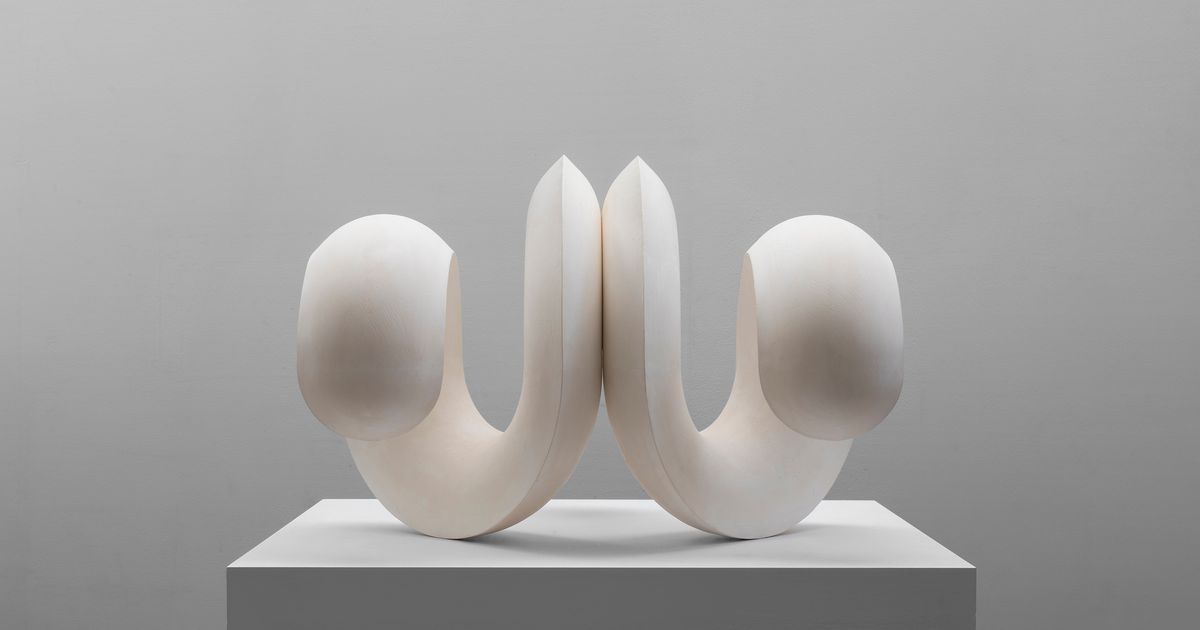 Installation view, Gretchen Andrews: Other Forms of Travel (2021)
Courtesy of the artist and Annka Kultys Gallery

Gretchen Andrew: Other Forms of TravelUntil 6 June, Annka Kultys, Unit 9, 472 Hackney Road, E2 9EQ; book via website The Los Angeles-born artist Gretchen Andrew has made headlines in recent years for hijacking online search engines and replacing the top results for topics such as “Frieze Los Angeles” or “Cover of Artforum” with images of her own work. Her first ever gallery show—which inaugurates Annka Kultys’s newly expanded space—is something of a watershed moment that pronounces Andrew’s entry into a world that her practice both venerates and undermines. Fittingly, it is all about articulating desire and reconstructing broken systems from the inside. Eight collage-on-canvas assemblage works embody “vision boards”, representing Andrew’s life goals, insecurities and dreams. Bedazzled in costume gems and crowded with fake flowers and butterfly stickers, their formal elements challenge conventions of taste while also—being figurative, loudly branded and on canvas—cynically fulfilling the key requirements for a commercial art show. But beneath these knowing winks at the gallery system, a deeper glitching is taking place. In Best MFA (2020), Andrew expresses a desire to graduate from a reputable art school, but search for “Best MFA” on Google and you will find several of the show’s works occupying the top images. By playfully infiltrating Big Tech, Andrew draws our attention to the fallacies that underpin dominant information systems, in hopes to build towards better ones. As she points out, the internet we have today was built by—and functions primarily for—a certain type of person (Western, heterosexual, male). By plugging her desires directly into the mainframe, she surpasses these limitations and invites us to imagine something more fluid, more exciting and perhaps even more real.

Haroun Hayward: Too Nice, Play it Twice Until 19 June, indigo + madder, Enclave 5, 50 Resolution Way, SE8 4ALThis solo show of new abstract oil paintings by Haroun Hayward digs into the disparate cultural influences of the artist’s upbringing in Haringey, North London in the 1990s, allowing him to negotiate the confluence of heritage that informs his identity. Bold geometric forms in bright primary colours resemble the woven South Asian rugs his Pakistani mother would decorate the house with, while circular shapes evoke Indian Yantras—diagrams from Tantric traditions. Equally present in more sombre coloured sections are the influences of Vorticism and the landscapes of Paul Nash. Unlike so much other work that examines diasporic identity, these paintings speak less to an inner conflict than to a harmonious wealth of references, which can be traced back to what Hayward describes as the most formative influence of his youth: rave. Mirroring the repetitive rhythms of 1980s acid house music in their structure and presentation, these paintings are situated within a subculture defined by a search for the transcendental via mass communion, drugs and ecstatic movement. Hayward says that he created these paintings following a period in which he stopped making work for personal reasons, and was determined for his return to art to focus on joy. “I want these works to make you feel good,” he says. “To remind you of the beauty and hope of dancing in a field with your friends.”

Tess Jaray / Paul de Monchaux: CorrespondencesUntil 28 April, Frestonian Gallery, 2 Olaf St, W11 4BEThough Paul de Monchaux and Tess Jaray have been friends since they were students at the Slade School of Art in the 1950s, this is the first time the octogenarian artists have shown their work together. A testament to their years of rich dialogue, Correspondences spotlights the profound affinities between the invented forms of De Monchaux’s lucid non-representational sculpture and Jaray’s crisply executed, hard edged paintings. In each case geometric rigour is always tempered by a very human subjectivity. For both precision is key, and a rigorous sensuousness runs throughout the show. It plays out in the echoes that reverberate between the voluptuous but also tautly contained curves and coils of De Monchaux’s carved plaster sculptures and the precise scoops and points where Jaray’s colour planes align in the pair of paintings. Architectural references abound too, whether in the rows of lunettes in Jaray’s two Predella paintings of 2017 or De Monchaux’s quartet of carved lime works. In a letter, Jaray praises one of De Monchaux’s curvaceous sculptures as expressing “the controlled wildness of later life” while he in turn salutes Jaray’s paintings for showing her “at the height of her powers,” echoing the wholly evident sentiment that these two artists, in their skills and abundant energy, are still at the top of their game.