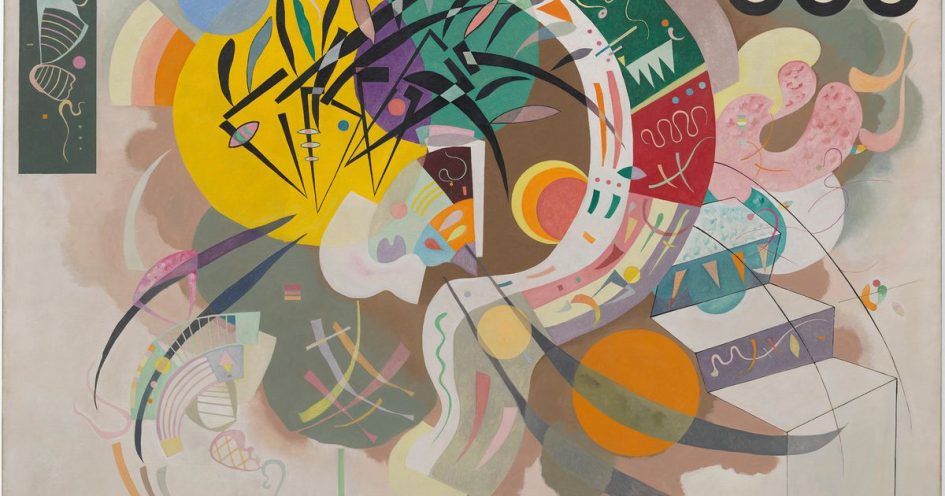 Kandinsky, Guggenheim Bilbao, 21 May 2021Few institutions are better placed to stage a monographic show of works by Wassily Kandinsky than the Guggenheim. Since meeting the pioneering Russian abstractionist in 1929, Solomon R. Guggenheim (and later his niece Peggy) began rapidly collecting his work, amassing some 150 pieces in total. 62 of these have now been arranged for a survey show—accompanied by a virtual tour by the exhibition’s curator Megan Fontanella— that chronologically charts around 40 years of Kandinsky’s career, from his Expressionist beginnings in Munich to his final years in Paris, where Surrealism and the language of natural sciences crept into his consciousness. Among the show’s masterworks are Composition VIII (1923)—acquired by the elder Guggenheim during his first meeting with Kandinsky—and Dominant Curve (1936), inspired by research into embryonic forms and DNA helixes. Other highlights include a suite of works on paper made by spray painting over stencils—an homage to techniques used by fellow Bauhaus professor and artist Paul Klee. A final room shows not only how wartime shortages resulted in Kandinsky producing his last works on small boards, but also how until his dying days, he maintained an enduring belief that art can incite a spiritual revolution within both the creator and the viewer.

Americans, National Museum of the American Indian The National Museum of the American Indian is hosting an online iteration of its provocative exhibition Americans, which opened at the museum in 2018 and brings together archival materials that offer a poignant glimpse into the present-day experience of Indigenous communities, like vintage advertisements and objects that present a fetishistic view of Indigenous life. The show’s organisers organisers have also dedicated a section of the online show into a page devoted to the fraught history of Thanksgiving. Additionally, the museum is hosting the Native Cinema Showcase, an annual festival in Washington, DC which is being held remotely for the first time, until 27 November. The programme includes award-winning films and documentaries by international Indigenous film-makers, including fan-favourite classics and new works like Blood Quantum by Jeff Barnaby (Mi’kmaq)—which reimagines a zombie apocalypse where the Indigenous population is immune.

Barbara Kruger: Questions, Sprüth Magers, until 15 January 2021Barbara Kruger is no stranger to asking tough questions, having spent the past 30-odd years erecting billboards and plastering walls with her trademark text-based installations, each of which invites passersby to pause, think and reevaluate the world around them. Exploring these works, Questions features Kruger’s most recent installation Untitled (Who?) (2020), which poses questions such as “WHO DO YOU HATE?” and “¿QUIÉN ES EL QUE AMAS?” on the facade of Sprüth Mager’s Los Angeles space until 21 January 2021. Crucially written in both Spanish as well as English , it makes reference both to the divisive presidential election and the waning Anglo-centric nature of the US empire. Early works include a 1987 pro-choice poster which reads “your body is a battleground,” a message that continues to bear great relevance today. “I wish that the issues I’m dealing with weren’t pertinent,” Kruger says. “But unfortunately, these issues of power and control and disaster are ongoing.”