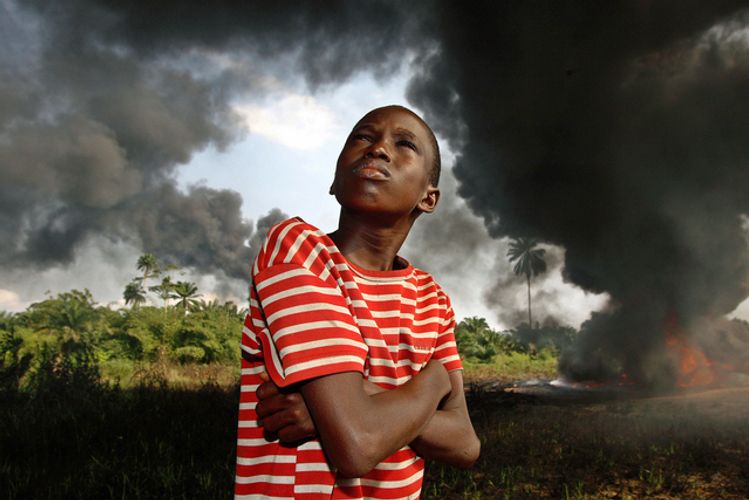 The nation’s museums and galleries have shut once again, but that doesn’t mean all art is hibernating behind closed doors. This weekend, why not take a government-approved stroll to check out what the city’s public spaces have on offer. All you need is a coat and mask.

Attempting to overcome the clichés often found within depictions of the global south by Western documentary photographers, Face to Face (until 29 November) presents photographs by artists whose work focuses on portraying their subjects with empathy and nuance. Exhibited around King’s Cross, including inside a newly built 90m-long tunnel, the works all reflect an active engagement between the participating photographers and the communities they capture. Mahtab Hussain returns to his motherland to shoot a landscape series on Pakistan’s Mangla Dam, which mourns the thousands of people who have been displaced from the area; Kyle Weeks subverts the typical artist-muse relationship by handing his camera over to the Himba people of northern Namibia.”We wanted to do away with the ostensible objectivity of reportage photography and focus instead on the subjective validity of lived experience”, the show’s curator Ekow Eshun says. The exhibition has been organised in collaboration with the activist foundation Fund for Global Human Rights and accordingly mirrors the charity’s core belief that “those with deep roots in their communities are best positioned to work with them”. Many of the photographers in Face to Face are creating new affordable editions to support the Fund for Global Human Rights, available via an online gallery.

“CAPITALISM is the VIRUS.” “Exploitation is the only thing that trickles down!” In usual times these would be pertinent messages to broadcast at one of London’s largest commercial thoroughfares. And as the city’s shops shutter and the economy nosedives once more, Cauleen Smith’s COVID MANIFESTO, which will be shown at the Piccadilly Circus Lights every day this month from 20:20-20:22, only hits that much harder. Originally an Instagram series, the statements in the manifesto are steeped in the language of contagion and disease, drawing parallels between the ills of neoliberalism, racial capitalism and the virus that has dominated this year. The artist’s desk—a sort of “living” still life—forms a backdrop on which personal items and remnants of daily rituals will accumulate, appear and disappear upon Europe’s largest public screen. Along with the manifesto’s 23 tenets, seven of Smith’s existing works will also be shown throughout the month. Each is a call to dismantle our ruling systems, one daily announcement at a time. The work is part of CIRCA, an ongoing public art project, which last month broadcasted a film by Ai Weiwei.

Spread around the skyscrapers of Canary Wharf, LOOKING UP (until 31 May 2021), is the largest show to date of the US sculptor Helaine Blumenfeld. Influenced by Cycladic sculpture and Futurism, as well as natural forms, the show’s towering works were inspired by Blumenfeld’s feeling that “society is moving towards a precipice caused by isolation, lack of empathy, the breakdown in trust, and absence of leadership”. The exhibition includes the monumental three-part sculpture Taking Risks (2019) carved from Carrara marble, which highlights the sculptural vocabulary Blumenfeld has refined throughout her career, testing the limits of the materials in which she works. Also presented are works made of bronze such as Illusion (2018)—three inter-related pieces that evoke the image of three abstracted figures supporting one another and its smaller, terracotta version made in 2017.

A print series of Jacob Lawrence’s earliest narrative cycle has been acquired by the Colby College Museum of Art
‘Prison is boring as hell, working creatively is way to be absorbed’: Sarah Lucas on isolation and judging the Koestler Awards
To Top
error: Content is protected !!
Top