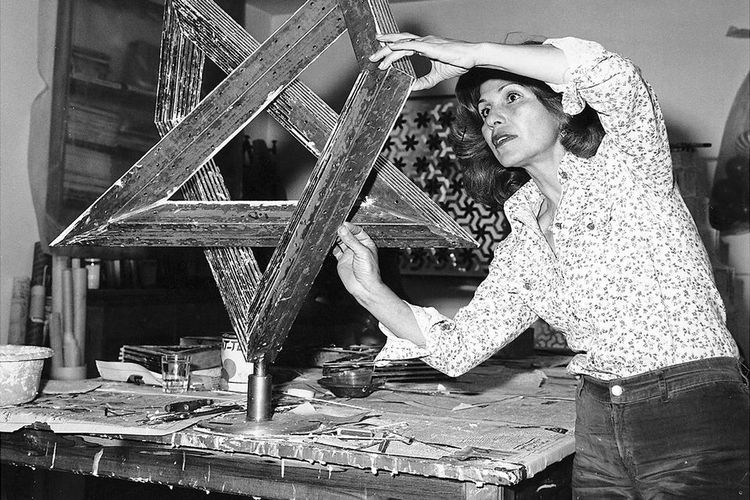 
Monir Shahroudy Farmanfarmaian, a giant of contemporary Iranian art whose work mixes geometric abstraction with Persian and Iranian art and craft, died on Saturday aged 97 at her home in Tehran.

The Iranian artist and filmmaker Shirin Neshat has led tributes to the artist, who was born in Qazvin, Iran, in 1923 and spent decades in New York. In an Instagram post, Neshat wrote: “Monir Farmanfarmaian, the greatest and legendary Iranian woman artist, sadly left this world but her legacy and beautiful art will live on.”

Farmanfarmaian studied at the Faculty of Fine Art in Tehran before moving to the US in 1945, where she studied art at Cornell University in Ithaca and then fashion illustration at Parsons School of Design in New York from 1946-49. In New York, she met artists such as Louise Nevelson, Joan Mitchell, Willem de Kooning and Barnett Newman. She started her career as a fashion illustrator, befriending her peer Andy Warhol, and continued to study at the Art Students League.

“She was deeply immersed in the New York art world of the 1950s,” says Shiva Balaghi, a Los Angeles-based cultural historian. “She [also] travelled across the Iranian desert by car, learning about tribal art and absorbing the landscape,” she explains. Farmanfarmaian moved back to Iran in 1957 and represented the country at the 1958 Venice Biennale—winning a gold medal—as well as showing in the first Tehran Biennial that same year.

Rose Issa, a curator and writer who has organised shows of Farmanfarmaian’s work at her gallery in London, says that the artist was a free spirit: “She was courageous, and talented, and always did what she wanted. [She] always met the right people at the right time. She was born with talent, embellished everything she saw, touched, or cooked. A sophisticated artist who liked simple things, who could appreciate earthly beauty. The Iranians have a special word for it—she was khaki.”

Farmanfarmaian’s work included drawings, collage, reverse-glass paintings and large-scale sculptures. A turning point in her practice came in the mid-1960s. “Monir’s fascination with light and the Iranian traditional mirror mosaic form known as Aineh Kari began in 1966 with an encounter at the Shah Cheragh mosque in Shiraz. This experience led to her explorations of the infinite possibilities of sacred geometry,” says a statement from Third Line gallery in Dubai, one of Farmanfarmaian’s galleries.

Shiva Balaghi, a Los Angeles-based cultural historian, says Farmanfarmaian’s mirrored installations have become iconic. “Her art conveyed light and joy. She was a true creative spirit,” she adds. Such pieces were presented along with geometric drawings in her retrospective Infinite Possibility: Mirror Works and Drawings, 1974-2014, organised by Suzanne Cotter, the director of Mudam Luxembourg Musée d’Art Moderne Grand-Duc Jean, which opened at the Serralves Museum of Contemporary Art in Porto and then travelled to the Guggenheim Museum in New York in 2015.

“Monir brought to our pent-up western eyes a completely new perspective as to the possibilities of abstraction as an aesthetic and narrative form,” says Cotter. “Geometry gave her a system that was both compositional and narrative, and through which she was able to express the wonder and energy of life as cosmos that was also uniquely her own.”

In an interview with the curator Hans Ulrich Obrist in Interview magazine in 2015, Farmanfarmaian said that she had discovered that “geometry has meaning from the start,” adding: “It goes from triangle, to square, to pentagon, hexagon, all the way up to 12, which is the zodiac—the 12 months of the year.”


In 1979, Farmanfarmaian moved back to New York in exile during the Islamic Revolution, leaving behind her collection of Iranian folk art and other works, including gifts from her friend Warhol, which were seized and are mostly missing or destroyed. She began making small memory box works, “which I call heartache, because it’s very nostalgic”, she told Obrist. “I miss Iran. I put a picture of it, I put a piece of jewellery, in those memory boxes.”

Farmanfarmaian returned to Tehran and re-established her studio there in 2004, after being invited by the city’s Museum of Contemporary Art to show her work. Within the past decade, in addition to her travelling retrospective, she has exhibited in several museums including the Metropolitan Museum of Art in New York and the Institut du monde arabe in Paris, as well as biennials including the 2013 Sharjah Biennial, Prospect.3 New Orleans in 2014 and the 2016 Gwangju Biennale. She has upcoming solo exhibitions this year at the Sharjah Art Foundation and the Museum of Contemporary Art, Chicago, and a group show at the Institute of Contemporary Art, Boston.

In 2017, Farmanfarmaian realised a life-long ambition with the opening of her own museum—known as the Monir Museum—in a 19th-century former palace in Tehran. “My love for my culture is in everything I create… I can leave this country with a representation of my life’s work,” she told The Art Newspaper.

Farmanfarmaian “leaves us with an incredible legacy to match a life so fully lived”, say her US gallerists, Cheryl Haines and David Spalding of Haines Gallery in San Francisco. “There is so much to say about her as an artist, a person, a woman,” Cotter adds. “After a life of 97 years, Monir left us the gift of still wanting more.”

Louvre bids to buy Rembrandt masterpiece from Rothschild collection in France
On the Bard’s birthday, Sotheby’s announces it will offer Edward Hopper’s ode to Shakespeare
To Top
error: Content is protected !!
Top