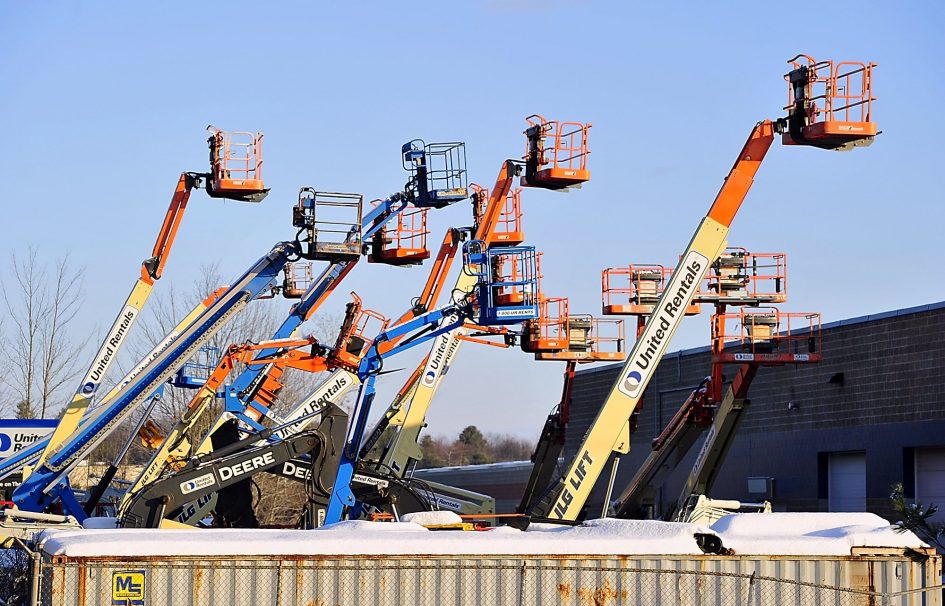 A group of multi-colored lifts at United Rentals.GordonChibroski | Portland Press Herald | Getty ImagesCheck out the companies making headlines in midday trading:United Rentals — Shares of United Rentals rose 3% following an upgrade to buy from neutral from Goldman Sachs. The brokerage said U.S. construction equipment supply has peaked and rental rates are likely to bottom in coming quarters.Harley-Davidson — HOG shares rose nearly 3% after UBS projected that the motorcycle company sales imply a downward trend less severe that that of fiscal year 2018. UBS added that if HOG can ship as it’s promised in the third quarter, the company could see its inventory down year over year as guided.J.C. Penney — Shares of the embattled retailer surged more than 15% after a report said the company is in talks with creditors to ease its debt load. This move buys J.C. Penney some time to sort out its debt situation before the holiday season.Netflix — The stock dropped 5.7% as CEO Reed Hastings declared the streaming video wars with Apple, Disney and others will be a “whole new world starting in November. While Hastings remains confident Netflix can ride out the threats to its market share, he admitted that it’s going to be a “tough competition.”Roku — Shares of the streaming device maker dropped 15% after Pivotal Research Group initiated coverage of the stock with a sell rating. Pivotal said Roku is “overvalued” due to increasing competition that “will likely drive the cost of [over-the-top] devices to zero” and hurt Roku’s advertising revenue. Roku’s stock is on pace for its worst week of trading since November.Xilinx — Shares of the chipmaker slumped more than 5.5% after the company announced on Thursday that Chief Financial Officer Lorenzo Flores will leave after delivering earnings on Oct. 23. Xilinx added that has started looking for a replacement.– CNBC’s Maggie Fitzgerald, Michael Sheetz and Fred Imbert contributed to this report.