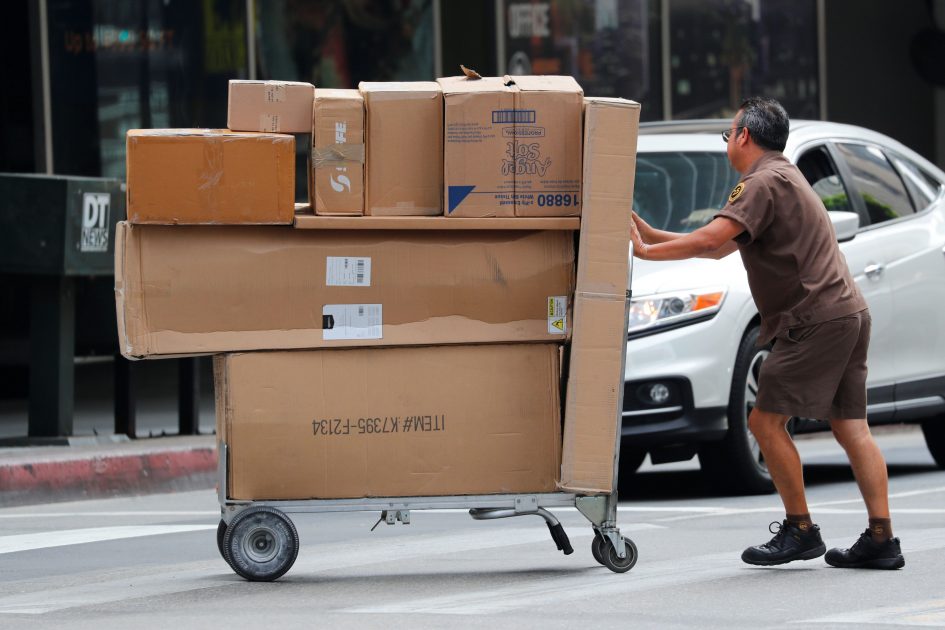 A UPS driver pushes a load of packages from his truck to a building in downtown Los Angeles, California, July 22, 2019.

UPS is expanding its delivery to seven days a week on Jan. 1 and has set up a subsidiary to deliver packages via drones.

“That’s going to be attractive to e-commerce shippers, if you want to make sure you can keep pace on e-commerce, you have to go to a 7- day service,” said Jack Atkins, a logistics analyst from Stephens, “E-commerce is the key to growth when it comes to the U.S.”

UPS also announced a new partnership with Michael’s Craft stores to expand its “Access Point” service that allows customers to pick up or drop off pre-labeled packages at more than 40,000 brick and mortar locations, including CVS and Advanced Auto Parts stores.

The company seems to be targeting digital retail with its expanded services. UPS is extending the hours for next-day delivery and expanding the capacity for overnight deliveries with more next-day air capacity.

Atkins expects that to be in high demand as companies like Walmart, Target and other digital retailers compete with Amazon.

“There is significant growth in U.S express traffic. The issue is that it’s lower yielding, so it comes back to density, ” Atkins said, “more per hour through the facilities, more packages per stop.”

Fed Ex announced in May it was adding Sunday delivery starting in 2020. It also partnered with Dollar General stores last month.

The company says it has more than 62,000 retail locations in its network. FedEx ended its express contract with Amazon last month, saying it plans to focus on other e-commerce customers.

UPS also said it applied for FAA approval to use drones for delivery over people, at night and out of line of sight of the operator. The drone business will operate is a wholly owned subsidiary called “Flight Forward”.

Google’s Wing subsidiary was the first to receive Part 135 certification from the air regulator. UPS is currently testing medical deliveries on the campus of a hospital system in Raleigh, NC. Through 2020, UPS plans to focus on the medical delivery business, which they estimate to be a $3 billion to $4 billion dollar market in the U.S.

“Medical drone deliveries target point-to-point movements within the campus or even outside the campus to a lab or between campuses” said Bala Ganesh, VP of UPS’ advanced technology group. “Our primary focus over the next year is going to be in expanding this healthcare use case.”

UPS also expects to use drone delivery for industrial, manufacturing and high-end retail, but e-commerce is a long term goal.