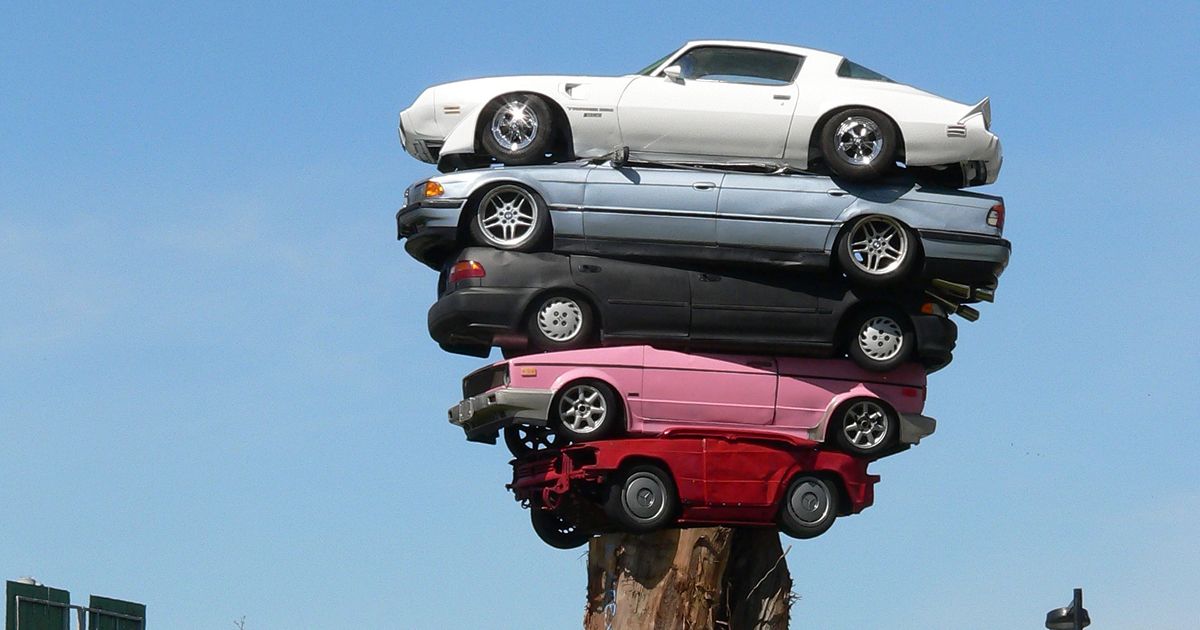 Trans Am Totem (2014), by Marcus Bowcott and Helene Aspinall

Vancouver is a city where culture is often overwhelmed by nature, and where views of the stunning mountain scenery and seaside can dictate decisions around public art. The Vancouver Biennale, responsible for some of the city’s most iconic sculptures, has had to deal with controversies in the past around views versus art issues, most recently with Chen Wenling’s Boy Holding a Shark, whose planned location on the South False Creek Seawall was foiled by the complaints of local residents.But in the case of Marcus Bowcott’s and his partner Helene Aspinall’s Trans Am Totem sculpture, a legacy of the 2014-2016 Vancouver Biennale made up five refinished scrap cars stacked on an old-growth cedar tree installed at a busy city intersection, some local residents were rather too fond of the ecologically themed work. The residents in question, however, were pigeons and starlings, who had literally made themselves at home inside the sculpture. The birds were evicted this past weekend by City of Vancouver crews who removed the installation which will be cleaned, restored and eventually relocated. This weekend we’re taking down Marcus Bowcott and Helene Aspinall’s “Trans Am Totem” to properly restore this public art piece, which has incurred significant damage from birds. We’re currently identifying a long-term location to install the artwork once restoration is complete.— City of Vancouver (@CityofVancouver) August 11, 2021 The work was designed as a site-specific piece which “questions the cycle of production and consumption,” says Bowcott, and it was sited on land that was the traditional territory of local First Nations before it became an industrialised area and a centre of vehicular traffic. The sculpture, which features a traditional bear claw carved by Squamish artist Rick Harry (Xwalacktun) into the trunk of the 150-year-old cedar tree, was installed near the city’s Georgia Viaduct—the remaining artery of a foiled early 1970s freeway project, that saw the city’s black neighbourhood demolished. The area is being revived as part of a larger development plan that includes the eventual removal of the viaduct.

While the work was originally intended to be a temporary two-year installation, in April of 2019, it was made a permanent city sculpture through the donation of $250,000 from Chip and Shannon Wilson, the local billionaire couple who founded the yoga-wear line Lululemon and have been long-time supporters of the Biennale.Now, Trans Am Totem’s will have to find a new home not because of funding or local politics but due to bird dung. “The last time we went, there were starlings up there,” Bowcott told the CBC. “There’s lots of bird poo… I had to wear a vapour mask and I still felt a little dizzy after getting out of there.”

This would seem a fitting gestalt for a work that proclaims the triumph of nature over consumerism. Bowcott says he hopes to consult with the city to find the right home for the work, initially inspired by his fascination with crumbling cars while a student in the 1980s at the Royal College of Art in London, and by his summers spent working on Vancouver’s Fraser River, where he saw a certain raw aesthetic appeal in the carcasses of old automobiles towed on barges.Reached by phone in Edmonton, Biennale president Barrie Mowatt says he hopes that a future site for Trans Am Totem “will be chosen that reflects the Biennale’s mandate of transforming under-utilised city spaces, and having art act as a catalyst for community engagement, education and social action.”

‘Do leopards change their spots?’: Taliban threat to heritage in Afghanistan could be worse than in 2001
Ancient history? Worcester University to close its archaeology department in another blow to heritage sector
To Top
error: Content is protected !!
Top