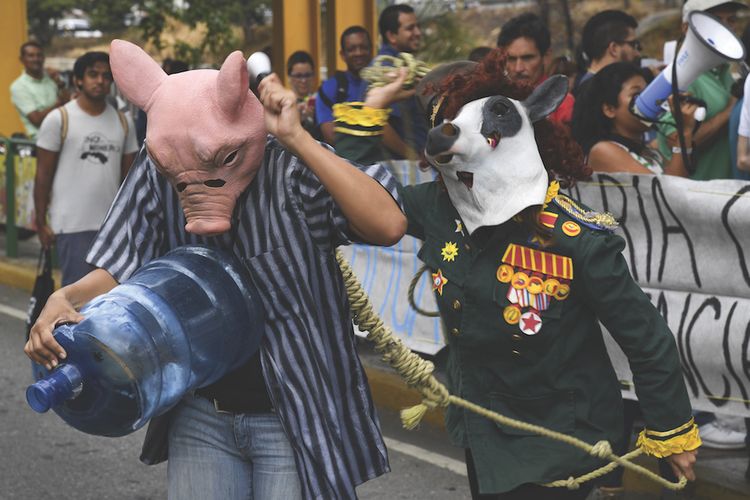 
In Venezuela’s shrunken and fragmented art market, as in politics, left-wing supporters who have stuck with socialist President Nicolás Maduro have a stranglehold. Some artists and dealers have fled the crisis-stricken country, an exodus that began 20 years ago when the army rebel Hugo Chávez took power. For those who remain under the six-year reign of Chávez-appointed Maduro—now vehemently contested by the US-supported opposition leader Juan Guaido, who called for a military uprising to oust the socialist party today—narco-fortunes overheat the top end of the market, while artists at the bottom lack fundamentals such as water, not to mention collectors.

The Venezuelan-born dealer Henrique Faria, currently based in New York, calls it a “pseudo-market” of distorted values buoyed by a so-called black and white (oil and cocaine) economy. “Prices of Venezuelan artists in the country have gone up to ridiculous levels, if you compare those prices to what they are internationally,” he says. “You could find a third-rate Carlos Cruz-Diez or Jesús Soto—which, believe it or not, do exist—for a ridiculous price, because someone who is part of the narco-state can afford to pay $600,000.”

Prices for Cruz-Diez’s larger chromatic works clocked in at around $20,000 in 2000, but can fetch around $1m today. Faria says that prices for lesser works have spiked as left-wing “Chavistas”, and those close to the government vie for them. The paintings, he says, are “something that the former elites had and these new elites want to have”.

The market for some artists is riding a familiar wave of drug fortunes, according to insiders who track illegal shipments between Colombia and Venezuela. Fernando Botero, whose prices surged when he became a favourite of Colombian drug barons, is now an artist of choice in Caracas. “It is a market value that is completely artificial, and it is created by a few groups of collectors,” says one Venezuelan artist, who asked to reamin anonymous for safety reasons. “There’s that old slogan ‘follow the money’. You follow the money and you see the connections between Venezuela and Colombia of the illegal drug traffic. These will be expressed culturally in the art that [the nouveau riche] collect and the artists that they support.”

Since the Chavez years, a parallel boom has fuelled the broader international market outside Venezuela for a few Venezuelan artists. “In 2000, the auction record for Gego [Gertrude Goldschmidt] (1912-94) was $12,000,” says Axel Stein, an art advisor who formerly led Sotheby’s Latin America department. Now the Venezuelan kinetic artist’s work can sell privately for more than $1m and prices could rise further with a survey at Brazil’s Museum of Art São Paulo (MASP) opening later this year.

Hardest hit in Caracas today is the vanishing middle of the Venezuelan market—artists unknown outside the country who sold almost exclusively to Venezuelan collectors in the 1970s and 1980s, but whose market “never internationalised”, Stein says. “Today the collector base for those artists lacks any money to buy. An [average] price today is at around $3,000-$5,000, down from around $15,000 or $20,000.”

Sales of any amount come with a price. One Caracas-based artist says over email that he would not disclose how much he was paid for recent works, fearing extortion or kidnapping by criminal gangs that might suspect that he had hard currency.


Yet political work by artists who have known only the market under Chavez and Maduro does still sell. Deborah Castillo, originally a photographer, made a name with performance pieces like El Beso Emancipador (The Emancipating Kiss) in 2013, a satirical video encounter with Simon Bolivar, the 18th-century liberator of the northern half of South America and the man who the Partido Socialista Unido de Venezuela (PSUV) founder Hugo Chavez says inspired his revolution. When state TV denounced Castillo in 2013, a Twitter vendetta drove her to the US a year later. Her work still satirises Chavez’s Bolivarism. It sells at Carmen Araujo Arte in Caracas, for between $5,000-$10,000.

Austerity animates grotesque collages of found materials by Jose Vivenes, and works by his young peers tend toward the conceptual. In 2007, Feliz Suazo, Cuban by birth, founded the space El Anexo Arte Contemporáneo, which specialises in this type of alternative work. Average prices are around $2,000, yet “official institutions consider this kind of art elitist, removed from the interests of the general population”, Suazo says. He sells to a small public and at art fairs in Miami and Latin America.

Venezuela still has no export controls on art, enabling Venezuelan collectors fearing Cuban-style art confiscations that have yet to happen to flee with their property. Much of the art in Caracas, once a collecting hub that enriched its own artists, is now neglected and institutional collecting on the whole is intermittent, if not irrelevant. Museums, once supporters of experimental art, cannot afford to buy, exhibitions are few and most artists shown are supporters of the regime. Those who visit these museums report lax security, leaks and galleries repurposed as meeting halls.

With few exhibition opportunities at home, museums abroad have become venues of last resort when trying to build markets for older artists. Last September, at the Museum of Fine Arts Houston, Contesting Modernity: Informalism in Venezuela, 1955-75, surveyed unruly artists critical of Geometric abstraction. It drew mostly from Venezuelan collectors and the holdings of Banco Mercantil in Caracas. An

institutional buyer of Venezuelan art since 1994, Banco Mercantil collected some 3,000 objects ranging from 18th-century paintings to contemporary works. The bank bought under the Chavez regime, but stopped five years ago due to budget constraints, says its curator, Tahia Rivero, who co-organised the Informalism show.

“At this point I can say that there is no art market in Venezuela,” says Antonio Ascaso of the Caracas-founded Ascaso Gallery now operating in Miami, who shows the abstract work of Venezeulan modernist artist Oswaldo Vigas. Indeed, the majority of Vigas’s work is in Miami, according to Dilia Hernandez, director of the Oswaldo Vigas Foundation. “[But] most of his largest paintings are in Caracas, and it is important for us to keep an office here,” she says, despite going long stretches without telephone service or electricity. And conditions are worsening. “Most people don’t have water; they break into stores to get it,” she says.

No water, yet there are Vigas paintings for sale in the few remaining galleries, which presents a moral dilemma, Hernandez says: “The people who really have money now are connected with the government. Selling [to them] is like selling art to the Nazis—that is my personal opinion.”