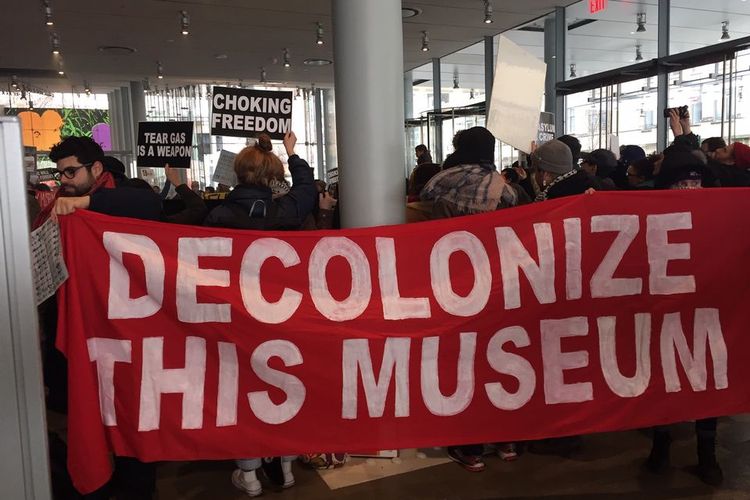 
A protest at the Whitney Museum of American Art in December

A letter calling for the ouster of the board vice chairman of the Whitney Museum of American Art has gained dozens more signatures, including more than half of the artists chosen for the Whitney Biennial.

The vice chairman, Warren B. Kanders, has been targeted for months by protesters because his company, Safariland, is accused of manufacturing and marketing the tear gas that was fired by American border agents last November at migrants seeking to enter the United States from Mexico. On 5 April more than 120 theorists, critics and scholars submitted a letter calling for his removal.

On Monday, dozens of artists including Barbara Kruger, Nan Goldin, Hans Haacke, Emily Jacir, Yvonne Rainer and Laura Poitras added their names to the letter. Among them were 48 artists who have been selected to take part in the Whitney Biennial, which opens on 17 May.

“The stakes of the demand to remove Kanders are high and extend far beyond the art world,” the letter says. “Alongside universities, cultural institutions like the Whitney are among the few spaces in public life today that claim to be devoted to ideals of education, creativity, and dissent beyond the dictates of the market. Yet, these institutions have been historically entwined with the power structures of settler colonialism, white supremacy, heteropatriarchy and capitalism.”

Neither the Whitney nor Kanders commented on the additional signatures.

In December, after dozens of Whitney staff members expressed “outrage” over Kanders’s ties to Safariland in an open letter, the museum released a letter sent by the museum’s director, Adam Weinberg, to the staff and trustees calling for a dialogue while emphasising that “we truly live in difficult times”.

“The Whitney Museum has always been a space for the playing out of disparate and conflicting ideas,” he wrote. “Even as we are idealistic and missionary in our belief in artists—as established by our founder Gertrude Vanderbilt Whitney—the Whitney is first and foremost a museum. It cannot right all the ills of an unjust world, nor is that its role.”

Kanders also offered a response in December, saying that he was not “the problem the authors seek to solve”.