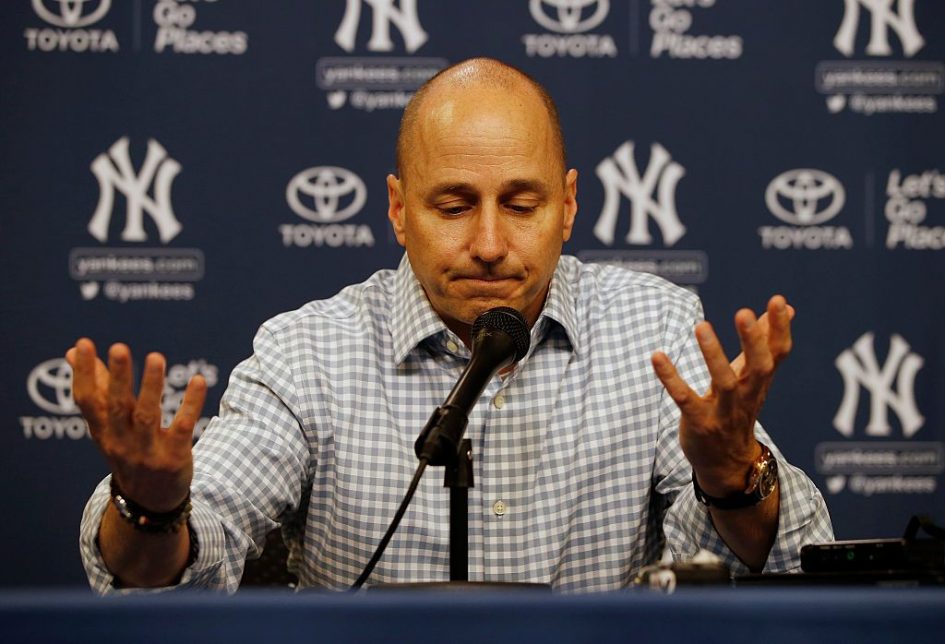 “Driver turn off your car and put your hands up!,” the Darien police officer yells on the video, which shows him pointing his pistol in Cashman’s direction during Friday’s incident at a gas station in that town.

A Darien police detective also had his weapon trained in Cashman’s direction during the stop.

Footage from Darien, Connecticut, police body cameras of an Aug. 9, 2019, gunpoint stop of New York Yankees General Manager Brian Cashman at a local gas station, after his car was still being mistakenly reported as stolen.

The confrontation came after police responding to a report of a man with a gun who had been seen driving a white Jeep spotted Cashman’s vehicle — which incorrectly was still listed as stolen despite having been recovered by New York police days earlier.

“Put your hands out the window!,” the officer yells toward Cashman’s Jeep Wrangler, the video reveals.

“Open your door with your hand from the outside, please!” yells the cop, who had raced to the Shell Station in his patrol car after the Jeep was reported as being there.

The video shows Cashman, 52, calmly exiting the Jeep with his hands raised in the air.

Then, at the instructions of police, Cashman turned around facing in the opposite direction of the police, and walked backwards toward them, with his hands outstretched.

“You look very familiar to me,” the officer says after Cashman goes to get his identification from inside the Jeep after explaining that he had picked up the stolen car found by New York police two days earlier.

“I’m the GM of the New York Yankees,” Cashman replies.

“Yeah, I know, I used to see you as Brook Street Bagels when I was an Eastchester cop,” the officer says.

“I apologize for the embarassment,” the cop adds.

A detective explains to Cashman what led to the stop.

“Now you got a story for the guys,” the detective said, in an apparent reference to the Yankees.

The Bronx Bombers executive Cashman had reported his Jeep stolen a week earlier from his home in nearby Norwalk.

After it was recovered by police in New York and returned to Cashman, New York cops never removed the vehicle from a list of stolen vehicles.

Cashman told Hearst Connecticut Media on Monday that he was headed to the Norwalk Police Department to have the Jeep checked for evidence when he was stopped by Darien cops.

“I started to pull out when two SUVs from Darien Police blocked me from exiting from the front, and they closed the Post Road,” he said.

“They asked me if I was driving my vehicle because it was still reported as stolen,” he said.

Cashman told the outlet that he got out “without rash movement” as officers instructed.

“They were very professional,” he said.

“Once they got my ID, and searched my car, they realized,” Cashman said.

“Ultimately, if I was a Darien resident, I’d feel good about being protected,” Cashman said. “If you are stopped, just do what what you are told. It will all work out. Let them complete the job they are doing. It’s about public safety.

Darien police have said that the incident was part of a chain of events set in motion Friday morning, when the department was notified by a local medical group that a male patient had been seen there in possession of a handgun.

“The patient had already completed his physical and left the office when the initial report was made to the police,” Darien police said. “Officers were responding to the Medical Group in order to meet with the staff to ascertain exactly what had transpired with the patient.”

“Once it was confirmed that the patient had already left the office and had possibly been driving a white, Jeep like vehicle, officers began checking the surrounding area,” police said.

“Within minutes, a white Jeep was observed in the Shell gas station on Boston Post Road at Sedgewick Ave. The license plate of this vehicle was checked by officers and it was found to be listed as a stolen vehicle.”

“As the vehicle started to leave the pumps, it was stopped by Darien officers. Felony motor vehicle stop procedures were utilized where two Darien officers did un-holster and had their duty weapons in hand,” police said. “

The operator, quickly identified as Mr. Brian Cashman of Norwalk, CT, was fully cooperative with all commands and instructions given by the officers conducting the stop and the encounter was quickly, efficiently and properly deescalated. It was also quickly determined that Mr. Cashman was the true owner of the vehicle. “

Police said that “no force of any type was actually used by officers; Mr. Cashman noted the professionalism and obvious training of the involved officers who were able to successfully bring this incident to the proper conclusion.”