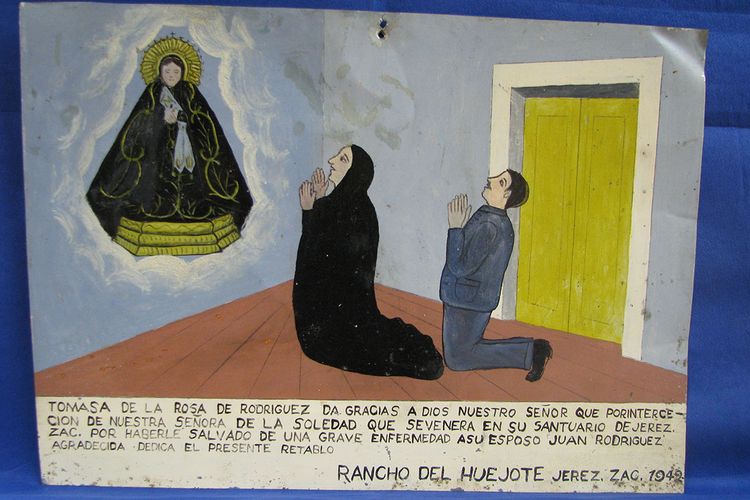 
The ex-voto paintings were once offered to churches by parishioners along with prayers to saints, or as decorations depicting local landscapes and daily experiences
Courtesy of the National Institute of Art and History, Mexico City


Mexico’s Los Pinos presidential palace, which President Andres Manuel Lopez Obrador opened as a public museum in December but has been largely emptied of art, will soon host a collection of recovered works. About 600 votive paintings from the 18th, 19th and 20th centuries, which had been taken from Mexican churches and were returned by Italy in March, are due to be publicly exhibited in the residence this fall.

“Los Pinos is an emblematic space and the repatriation of patrimony is the Culture Ministry’s line of work,” Antonio Marvel, a ministry spokesman, tells The Art Newspaper. “The 594 ex-votos recovered represent one of the greatest repatriations in [the country’s] history.”

The objects were once offered to churches by parishioners along with prayers to saints, or as decorations depicting local landscapes and daily experiences. “In receiving these pieces, Mexico recovers a wealth of iconographic testimonies that allow us, through time, to delve into the domestic and community life of the peoples of Mexico,” says Diego Prieto, the director of the National Institute of Art and History (INAH), in a statement.

Riccardo Cannelli, a cultural expert at the Italian Institute of Culture, says the works represent an important part of Mexico’s historical and artistic heritage and applauded the forthcoming exhibition. But while the display will be the first of its kind at the former presidential palace, he suggested the bigger news was how the paintings had been discovered in the first place. “The noteworthy thing is the Italian police work,” Cannelli says.

According to an informational document issued by Stefano Carella, a Carabinieri captain based in Italy’s embassy in Mexico, an operation began nearly three years ago after the art investigators inspected an “unauthorised exhibition” at the Casa Manzoni in Milan. “Police realised that the temporary exhibition was made up of more than thousands of sacred art paintings from many shrines and sacred places in Italy and abroad, a quite suspicious fact given the nature of the pieces,” the document states.

Authorities referenced the objects against a database of cultural property and identified iconographic characteristics such images of as the Virgin of Guadalupe, determining that many of the works were of Mexican origin. They were traced to a Milanese collector who had inherited the works from his father Eugenio Cefis, a powerful and controversial Italian businessman who died in 2004.

“On the back of some of objects that have been returned to Mexico you can see [Cefis’s] name,” Carella says. “We believe they works that he personally bought during his travels in Latin America.”

The paintings, mades on simple materials like wood, fabric and cardboard, are currently being catalogued and restored at INAH. Curatorial decisions such as where the works will hang are still being determined, Marvel says. Cannelli says the Los Pinos exhibition is important symbolically—and perhaps politically useful for the nascent administration of Lopez Obrador. But, he adds: “It’s everyone’s cultural heritage.”

Hidden Cupid resurfaces in one of Vermeer’s best-known works after two and a half centuries
Edmund de Waal’s 2,000-book installation of exiled writers will tour to the British Museum
To Top
error: Content is protected !!
Top