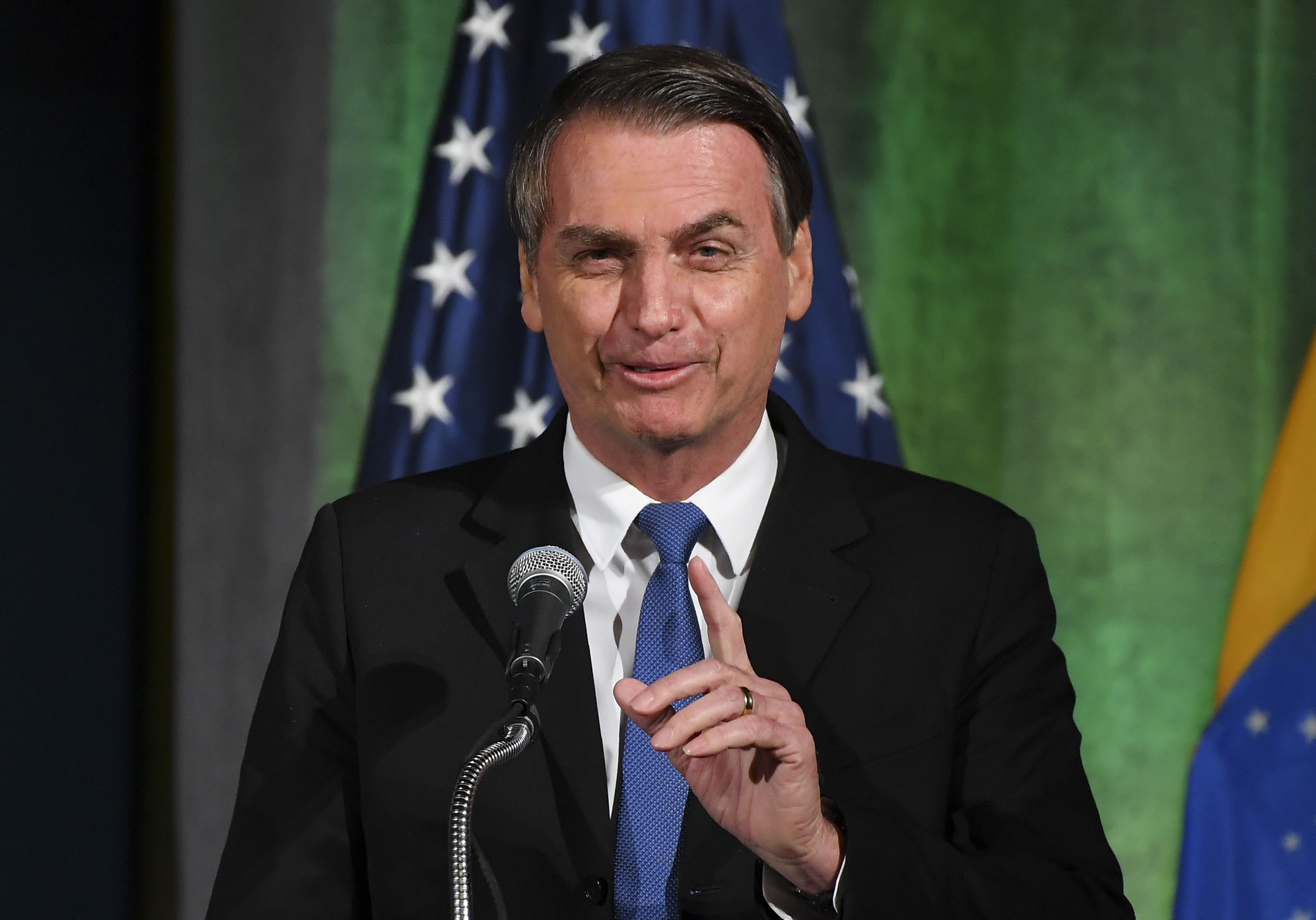 Brazil’s President Jair Bolsonaro speaks during a discussion on US-Brazil relations at the US Chamber of Commerce in Washington, DC on March 18, 2019.

The Brazilian-American Chamber of Commerce 2019 Person of the Year gala sponsorship webpage is no longer available amidst the controversy that the Chamber is awarding the honor to anti-LGBTQ Brazilian President Jair Bolsonaro. The webpage which had listed many large U.S. and international banks, as well as other corporate sponsors such as UnitedHealth, now shows a “page not found” message.

In recent days, Delta Air Lines, Bain & Company, and The Financial Times pulled sponsorships of the event as backlash grew.

The Brazilian-American Chamber of Commerce could not be immediately reached for comment. Another page on its website profiling the event, its history, and soliciting sponsorships is still up. It states “The choice of President Bolsonaro is a recognition of his strongly stated intention of fostering closer commercial and diplomatic ties between Brazil and the United States and his firm commitment to building a strong and durable partnership between the two nations.”

Many corporate sponsors remain attached as of the last time the sponsorship page was available on Thursday, including Wall Street banks Citigroup, JP Morgan Chase, Morgan Stanley and Bank of America. Marriott International’s New York City Marriott Marquis is the event venue, after the American Museum of Natural History pulled out as host after outcry from politicians and celebrities including State Senator Brad Hoylman and LGBTQ Americans and allies – including actor Debra Messing.

“The Brazilian-American Chamber’s choice to remove this webpage is an indication that they understand they are on the wrong side of this situation,” said Zeke Stokes, chief programs officer for GLAAD. “The Chamber cannot hide its connection to the dangerous anti-LGBTQ rhetoric and record of President Jair Bolsonaro at this point, and it must make its views clear and condemn his virulent anti-LGBTQ views that put Brazilians in danger.”

State Senator Holyman has asked the Chamber to cancel the event planned for May 14. In a petition launched by the New York Senator on Change.org more than 55,000 people have signed up demanding the cancellation of the Chamber’s “Person of the Year” event.

Bolsonaro’s record on women, race and LGBTQ rights has sparked outage since his 2018 election. Just hours after his inauguration, Bolsonaro removed LGBTQ rights from human rights ministry considerations and wanted to remove homosexuality from textbooks.

In the past, Bolsonaro has been quoting making multiple anti-LGBTQ statements including saying that he would rather this son be dead or a drug addict than gay. He also recently warned against allowing Brazil to “become known as a gay tourism paradise.”

Citigroup CEO Michael Corbat defended the bank’s decision to sponsor the event in a CNBC interview on Thursday, saying “We spend a lot of time making sure our people understand the values of our company and I hope that in terms of that, there’s no question of our support, our unwavering support for our LGBT community.”

For some Citi customers, Corbat’s explanation was not good enough.

Marriott has defended its decision to host the event, telling CNBC in a statement earlier this week that “We are required by law to accept business even if it conflicts with our values. Acceptance of business does not indicate support, or endorsement of any group or individual.”

Marriott and Citigroup both have long histories supporting LGBTQ rights. Marriott CEO Arne Sorenson was among the first “CEO-activists” to challenge politicians in the U.S. over legislation seen as discriminatory, while Citi has received a perfect score on the Human Rights Campaign Foundation’s Corporate Equality Index for 15 consecutive years.

The backlash over Bolsonaro’s views on homosexuality is one of several recent instances in which Wall Street has been wrestling with the rift between its support on social issues and business operations. A growing list of multinational banks including J.P. Morgan are banning employees from staying at hotels owned by the sultan of Brunei, where homosexuality and adultery is punishable by death.

—By CNBC’s Ryan Ruggiero and Rhania Kamel, special to CNBC.com

Fiat Chrysler shares jump on mixed first-quarter earnings
Drone flies a kidney to a transplant patient for the first time ever
To Top
error: Content is protected !!
Top