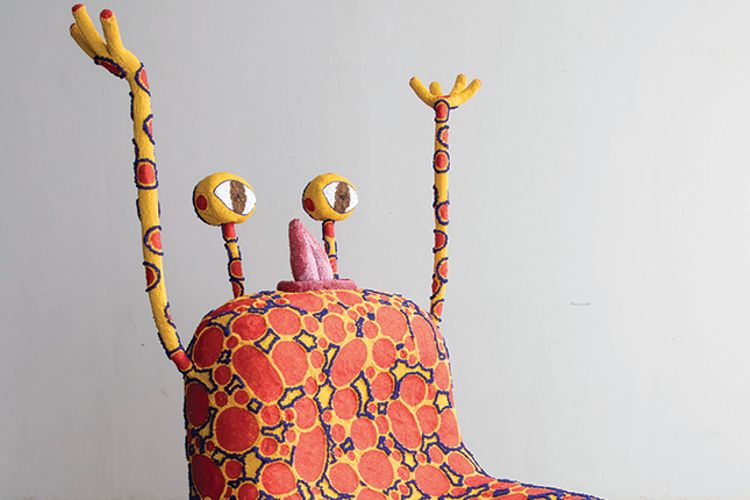 
Spotley Cru, a beaded and bronze chair by the Haas Brothers (2017).
Courtesy of Marianne Boesky


There has long been a strict demarcation between art and design, but blue-chip art galleries are now taking on designers and design collectives who are blurring the boundaries between the two. Leading the charge is Pace gallery, which has roped in collectives Random International, Studio Drift and Studio Swine, and which participated in the inaugural edition of the hybrid art-and-design fair Object & Thing in New York this past weekend. Additionally, the gallerist Marianne Boesky made waves last year when she brought on board the Haas Brothers, whose designs frequently meld gilt bronze with fur to create animal-like objects.

“Our goals are to transcend the hierarchical boundary that still separates craft and design from fine art,” Boesky says. “I think all three of us get the most excited when we place a work with a major, rigorous contemporary art collector who sits on important museum boards.” She has set her sights, she says, on more private commissions and public art installations.

The Haas’s route to the art world has been unusual. They began fabricating furniture, then dabbled in fabric design with Versace and created sets for Lady Gaga. In 2014, the brothers signed up with R & Company, a Tribeca design gallery, which made possible their recent solo exhibition at the Bass Museum in Miami in December and continues to represent their more functional work.

“Joining up with Marianne means we have a really loud speaker in the art world,” Niki Haas says. Boesky, who considers much of what is made by Niki and his brother Simon to be sculpture, is planning a solo show at her Chelsea gallery in September and will devote her entire Frieze London stand to their work.

The Amsterdam-based Studio Drift, founded by product designers Ralph Nauta and Lonneke Gordijn, joined Pace’s Art + Technology division three years ago. Since then they have garnered a solo exhibition at the Stedelijk Museum and created works involving drones at Burning Man and Art Basel Miami Beach.

Yet added visibility is just one benefit. “Funding is critical, as some of our projects are ludicrously complex and involve technology,” says Hannes Koch, the co-founder with Florian Ortkrass of the London- and Berlin-based design firm Random International. It is now represented by Pace, as well as by the Carpenters Workshop Gallery. Lacma and the Sharjah Art Foundation each own editions of its well-known installation Rain Room, which took four years to produce.

The collective boasts a team of 30, including industrial designers and mechanical engineers. “And we keep expanding”, says Koch, who is moving into larger studios in Berlin. With Pace’s support, he adds: “We can embark on larger- scale and conceptual work.”

Deadly boat that sunk with hundreds of migrants on board becomes work of art at Venice Biennale
Bellinis and baby octopus: where to eat and drink during the Venice Biennale
To Top
error: Content is protected !!
Top