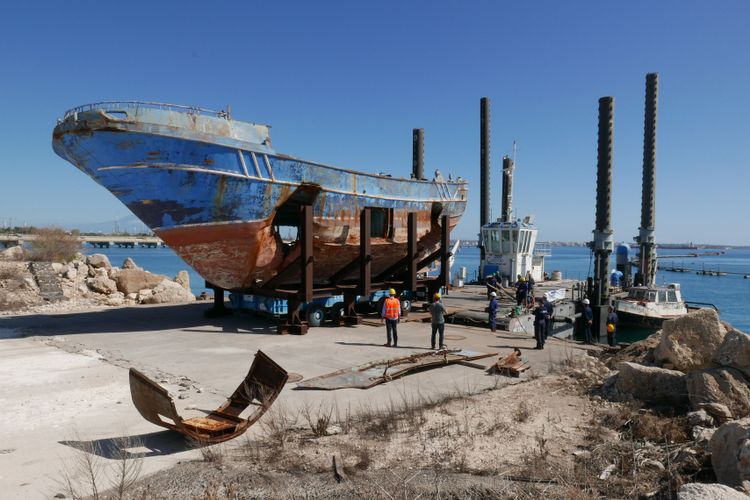 
The Swiss artist Christoph Büchel is returning to Venice four years after launching his controversial mosque initiative in the lagoon city. At the Arsenale site, Büchel will show the shell of a ship that sank between Libya and the Italian island of Lampedusa on 18 April 2015, with more than 1,000 migrants on board.

Tragically, only 28 people survived after the fishing boat collided with a Portuguese freighter. The project, entitled Barca Nostra, is part of the 58th International Art Exhibition (11 May-24 November) organised by the artistic director, Ralph Rugoff.

At a cost of €9.5m, the Italian government recovered the shipwreck in June 2016, transporting it to a NATO (The North Atlantic Treaty Organisation) base in Melilli in Sicily where personnel from the Italian navy, among other organisations, identified the bodies trapped in the hull of the ship. On 18 April, the Italian government handed over the boat to the commune (municipality) of Augusta, a project partner.

A press statement for Büchel’s project says: “The public exhibition of Barca Nostra at the Arsenale—in the context of the cultural spectacle and economic operation of the Biennale in Venice, a city based on migration that feeds the machine of its own destruction through mass tourism—opens up the possibility of actively using the collective shipwreck Barca Nostra as a vehicle of significant socio-political, ethical, and historical importance.”

Büchel continually explores the issue of migration. In 2017, he constructed a refugee camp at S.M.A.K. (the Municipal Museum for Contemporary Art) in Ghent, Belgium, which resembled the infamous former Jungle site in Calais.

The artist is known for his multi-layered, often controversial installations. In 2015, he set up a mosque in Venice in the former Catholic church of Santa Maria della Misericordia located in the Cannaregio neighbourhood. But the project, Iceland’s official contribution to the Venice Biennale, was closed in May 2016 by city authorities after being open for only two weeks. The mosque remained closed after a Venetian court declined to fast-track a motion seeking its reinstatement.

Art that breathes: Mexican murals aim to clean the air
When form plus function equals art
To Top
error: Content is protected !!
Top