Where to buy kid’s clothing 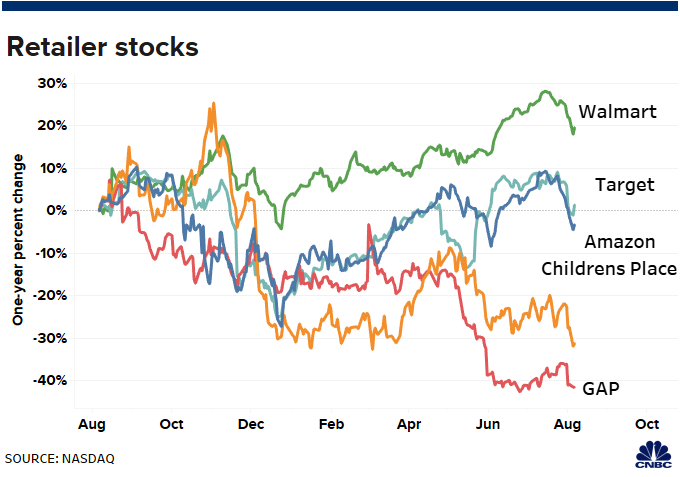 Rachel Szylar, a stay-at-home mom of three kids in New Jersey, has shopped at now-bankrupted Gymboree and Children’s Place before.

But this year, she’s planning to venture to big-box retailers Kohl’s, Target and Walmart to pick up graphic tees, polo tops, dresses and denim for her 10-year-old son, seven- and two-year-old daughters. The summer is wrapping up, and so thoughts are turning from swim parties and sleep-away camps to getting ready for a new school year. Szylar said she also might do a little shopping online.

“It’s hard to bring all the kids to the mall to get stuff,” Szylar said about why she started going to the likes of Kohl’s and Target. “Gymboree was also getting kind of expensive.”

It’s the first back-to-school season since Gymboree filed for bankruptcy in January for a second time, this time shuttering its entire fleet of stores.

Children’s Place is closing dozens of stores but is also trying hard to fill Gymboree’s void. There’s Carter’s, which also owns OshKosh B’gosh and sells a line of clothes exclusive to Amazon. Gap and Old Navy are two other popular back-to-school destinations. This year, Gap’s portfolio of brands includes Janie & Jack, which it bought from Gymboree out of bankruptcy court. The upscale brand, which sells girls dresses for upwards of $69, still operates JanieandJack.com and more than 100 stores.

Beyond that, parents are scanning the aisles in places like Target, Walmart and Kohl’s. Department stores are expected to be the most-frequented stop this back-to-school season, according to a study by the National Retail Federation, with 53% of parents planning to go to places like Macy’s, Nordstrom and J.C. Penney. Forty-five percent of NRF’s 7,660 survey respondents said they plan to go to specific clothing stores.

Department stores, however, have been struggling to keep merchandise fresh and stores exciting, opening the door for Target and Walmart to sell more children’s clothing. For many parents, Target and Walmart offer less-expensive alternatives to the likes of Macy’s and other department stores, where a Nike-branded hoodie can cost $45 and a pair of jeans could retail for at least $22.50. 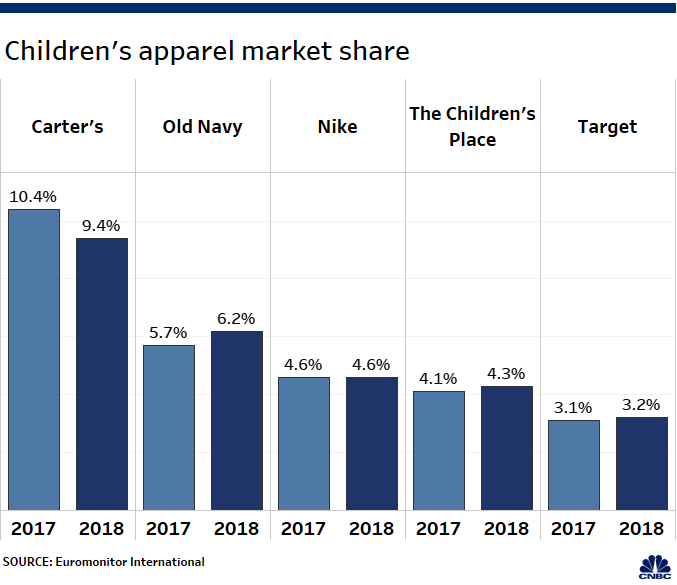 “People are looking to shop in the traditional venues a little bit less this year,” Coresight Research analyst Marie Driscoll said. “Still, department stores are the first place they’re going. But … there are more alternatives.”

The children’s clothing industry in the U.S. is valued at $33.9 billion, according to Euromonitor. But no one company has the majority of market share.

The power of a private label

Target has used its private labels to win over moms like Rachel Donde, a mother of two who works as a freelance journalist. Its quirky Cat & Jack clothing line, which makes pieces for infants and kids up to size 18, surpassed $2 billion in sales in one year. Under the Cat & Jack label, a graphic tee retails for $6, a knit dress is $9.99 and boys’ and girls’ denim is $8.

“I don’t like to spend a lot of money, so I do generally go between Target and Old Navy,” said Donde, who lives in a suburb of Houston with her 10-year-old daughter and nine-year-old son. Like Szylar, she also steers clear of shopping malls and prefers to go to strip centers that aren’t as crowded.

Target has another kids line, skewed to elementary school, called Art Class. And in June it announced a tween-centric brand called More Than Magic that sells sequin bomber jackets, glitter-embellished active-wear and pink tank tops with slogans like “Be You” on the front.

In stores, Target’s apparel displays are “looking phenomenal,” according to Driscoll, who’s been visiting various retailers’ stores ahead of the back-to-school season. “About a year ago, I noticed Target was merchandising more in a lifestyle way … putting outfits together on mannequins … creating stop-in-shops.” When you’re in the children’s clothing area at Target today, it almost feels like you’re in a Limited Too store, or Target’s version of a Gymboree store, she said.

Rival Walmart has incubated some of its own kids clothing brands as well. It launched Wonder Nation last year. It also has been working with Kidbox — a subscription-box company akin to Stitch Fix but focused solely on selling clothes for babies, girls and boys — to sell boxes on Walmart.com. One box retails for $48 and includes four to five items.

But Walmart doesn’t appear to have the same fashion clout as Target, which is known for being “cheap chic.”

“Sometimes for my two-year-old I buy certain things at Walmart,” Szylar said. “Because she gets messy in pre-school, and Walmart seems to be affordable. You don’t really care if she gets those things dirty.”

Analysts say Walmart has a leg up with its uniforms business, especially for parents on a strict budget. You can find a pack of two polo shirts for under $9. Khaki pants for girls were recently on sale for less than $6.

For the moms and dads who prefer to shop online, there are new options, but these tend to be more expensive.

Online personal styling service Stitch Fix ventured into the kids category in 2018, with most items retailing for $10 to $35, according to its website. Another is Rocket of Awesome, which offers a subscription option for parents but also sells items a la carte and is about to open its first bricks-and-mortar shop, in New York. Rockets of Awesome says most items on its website retail for $16 to $38.

Earlier this year, Rockets of Awesome landed a $12.5 million investment from Foot Locker to help it grow.

“When we started this business, the red flag that said there was something really big here … was the distinct disconnect I felt like the leading players had when understanding who their customer was,” Rockets of Awesome founder Rachel Blumenthal said in a recent interview about why she started the business in 2016. “They didn’t understand the modern mom — who the modern kid was. Kids are savvier than ever.”

With more kids having access to social media platforms at a younger age, even second and third graders are looking to influencers online — if they have access to YouTube or other social platforms — and their friends, to see what everyone is wearing. Kids are forming opinions earlier about how they want to be dressed. And retailers should be taking note of their tastes and how those are evolving, just like they do with older generations.

“People want not just the brand, but the story around the brand,” said Ryan Fisher, a partner in the consumer and retail practice of consultancy firm A.T. Kearney. “And it’s both parents that are buying and the children that are buying. You’re seeing kids having more influence on the purchases.”

The number of parents planning to shop online this year has dropped from a year ago, according to NRF’s survey, with 48.8% of parents saying they plan to shop on the internet compared with 55.4% in 2018. Some of that decrease is believed to stem from the fact that more parents shopped even earlier, during Amazon’s 48-hour Prime Day event in July. During Prime Day, Amazon touted deals on fashion, making it one of the most-discounted categories.

Szylar turns to Amazon when she needs a quirky outfit for a field trip, or the Peppa Pig shirt one of her kids has been wanting.

“My daughter loves to coordinate things,” the mom of three said. “One time she had a planetarium trip and I found a dress [on Amazon] that had planets on it. With Amazon, it will come in the mail within a day or two. … Sometimes it’s hard to find certain things they want in stores.”