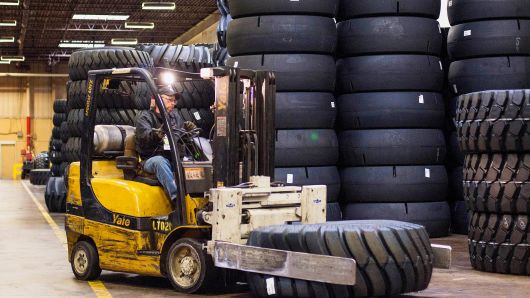 An employee uses a forklift to move large construction tires at the Titan Tire Corp. warehouse in Bryan, Ohio.

Despite February’s modest rise, inventory accumulation is expected to contribute to GDP growth in the first quarter. Growth estimates for the January-March quarter are in a 1.5 percent to 2.3 percent annualized range.

The economy grew at a 2.2 percent rate in the fourth quarter, stepping down from the July-September period’s brisk 3.4 percent pace. The inventory build, however, will likely weigh on GDP in the second quarter as businesses place fewer orders with manufacturers while disposing the unwanted goods.

In February, wholesale auto inventories edged up 0.1 percent after surging 1.5 percent in the prior month. The auto sector has experienced an inventory overhang because of weak sales.

Sales at wholesalers increased 0.3 percent in February after climbing 0.5 percent in January. There were increases in sales of motor vehicles, furniture, professional equipment and electrical goods. But sales of wholesale groceries dropped 2.1 percent, the most since April 2004.

At February’s sales pace it would take wholesalers 1.35 months to clear shelves, unchanged from January.