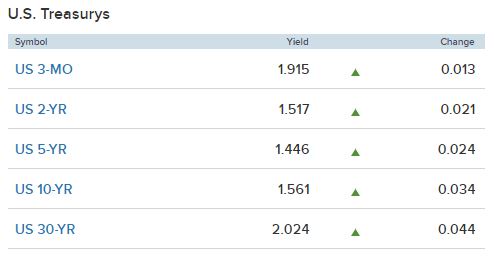 U.S. stock futures were pointing to a 150-point gain for the Dow Jones Industrial Average at the Friday open, capping a wild week on Wall Street. The Dow bounced up 100 points Thursday, a day after losing 800 points, or 3%, in the worst session of 2019. Encouraging data on the strength of the U.S. consumer, despite concerns about a global economic slowdown, won the day. Also bolstering investor sentiment, Beijing officials softened their trade war rhetoric. However, the Dow was 2.7% lower on the week ahead of Friday trading.

With stocks tracking higher, bond prices were lower on Friday. After dipping below 2% for the first time ever, the 30-year Treasury yield was back above that level Friday morning. Yields move inversely to bond prices. The 2-year and 10-year yield spread, which briefly inverted and flashed a recession signal earlier this week, remained back to normal, with the 2-year Treasury yielding less than the 10-year. On Thursday, the 10-year slipped below 1.5% to a three-year low.

3. Ray Dalio: China could use Treasurys as a trade weapon

Bridgewater Associates’ Ray Dalio told CNBC on Friday he would not rule out China using its Treasury holdings to gain an upper hand against the U.S. on trade. The founder of the world’s largest hedge fund also said the U.S. economy is taking a turn for the worse, with a 40% chance of recession before next year’s presidential election. However, economists boosted their forecasts for U.S. gross domestic product growth in the third quarter to a median of 2.1% after a batch of better-than-expected data. That’s according to the CNBC/Moody’s Analytics Rapid Update.

Mass pro-democracy protests were expected this weekend in Hong Kong, which has been emerging as another flash point between Beijing and Washington. President Donald Trump, taking with reporters Thursday evening, urged Chinese President Xi Jinping to meet with the demonstrators to defuse weeks of tensions in the Chinese territory. China’s ambassador to London said Beijing could use its power to stop the protests should they get out of hand. Trump also said the September trade talks with China were still on.

Shares of General Electric were 2% higher in premarket trading Friday, after tanking 11% in their worst decline in more than a decade. In a Thursday evening SEC filing, GE revealed that CEO Larry Culp bought nearly $2 million worth of company stock after Madoff whistleblower Harry Markopolos issued a report, calling GE “a bigger fraud than Enron.” Markopolos said a hedge fund paid him to conduct the research on GE, but he would not name the fund. Leslie Seidman, a GE board director and audit committee chair, also pushed back, telling CNBC that the Markopolos report “does not reflect the GE that I know.”