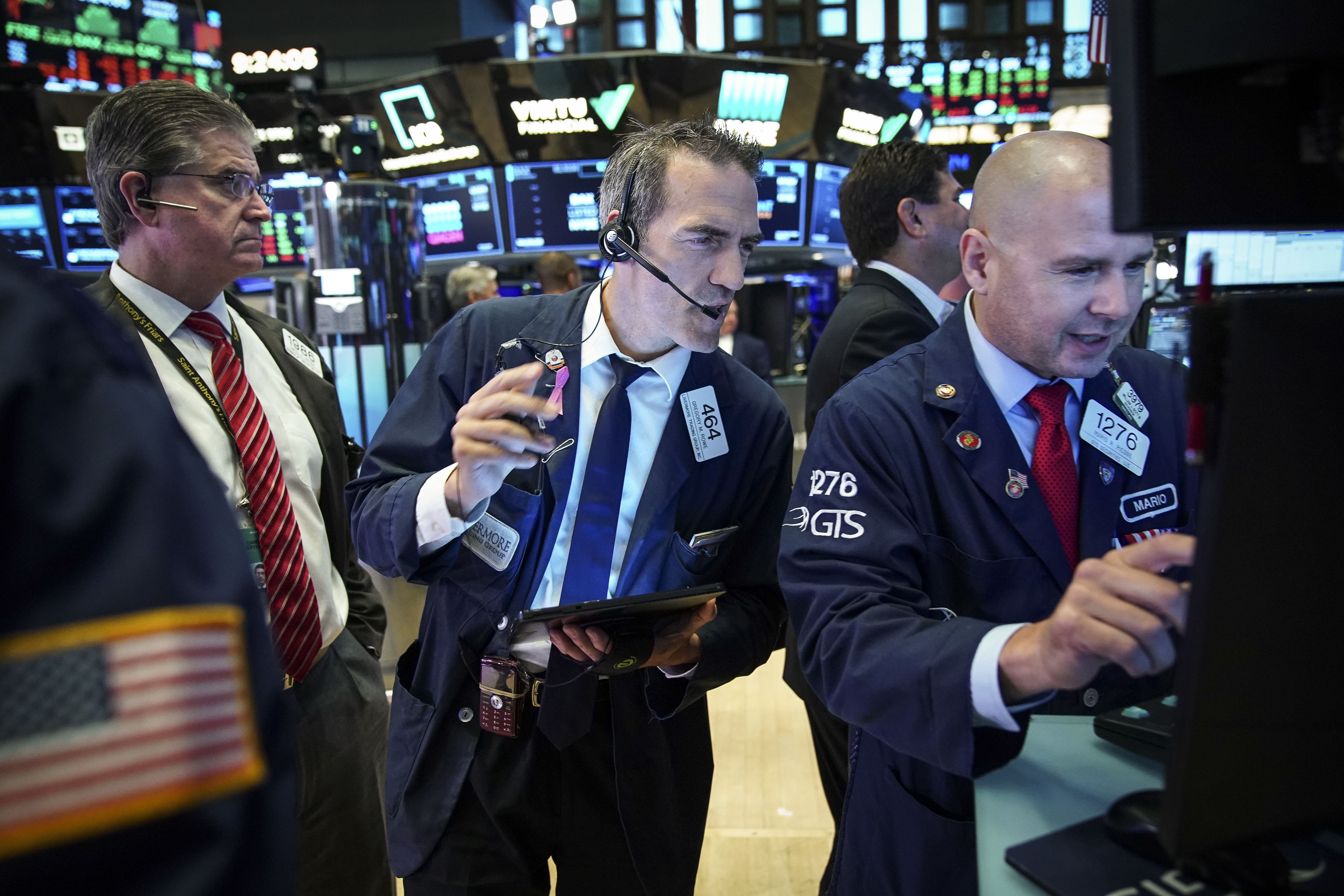 Traders and financial professionals work at the opening bell on the floor of the New York Stock Exchange (NYSE) on August 6, 2019.

Dow futures were pointing to a 300-point gain at Monday’s open. The Dow Jones Industrial Average surged 307 points Friday as a rebound in bond yields eased concerns about a recession. Ahead of Monday trading, the Dow was about halfway to erasing Wednesday’s 800-point plunge. The Dow, S&P 500 and Nasdaq enter the new week with three consecutive weekly losses. The Dow and Nasdaq were more than 5% below their all-time highs in July, while the S&P 500 was 4.6% off its record. However, they’re all still up double-digit percentage points for 2019.

3. Kudlow expects US to give Huawei a temporary ‘good faith’ reprieve

Larry Kudlow, director of the U.S. National Economic Council, speaks during a Bloomberg Television interview outside the White House in Washington, D.C., U.S., on Friday, Aug. 2, 2019.

The Commerce Department is expected to extend Chinese tech giant Huawei’s licensing process for three months as a gesture of “good faith,” top Trump economic advisor Larry Kudlow told NBC’s “Meet the Press.” Later on Sunday, Trump said he does not want the U.S. to do business with Huawei, which has gotten tangled up in the U.S.-China trade war. The two nations are expected to hold face-to-face talks in Washington next month. Delegations met in Shanghai last month with little progress at resolving their disputes.

Trump said he talked to Tim Cook about tariffs and Apple’s South Korean competitor Samsung. The president said the Apple CEO made a “good case” that it would be difficult for Apple to pay tariffs when Samsung does not face the same hurdle because much of its manufacturing is in South Korea. Cook made a “very compelling argument,” Trump told reporters Sunday, revealing he and Cook had dinner on Friday evening. Last week, the White House delayed 10% tariffs on certain items, including consumer electronics such as smartphones, from next month to mid-December.

5. Shareholder value is no longer the main focus of some of America’s top business leaders

The Business Roundtable, a group of CEOs from major U.S. corporations, issued a statement Monday with a new definition of the “purpose of a corporation.” The re-imagined idea drops the age-old notion that corporations function first and foremost to serve their shareholders and maximize profits. Rather, investing in employees, delivering value to customers, dealing ethically with suppliers and supporting outside communities are now at the forefront of American business goals, according to the statement. Jamie Dimon, chairman and CEO of J.P. Morgan Chase, is chairman of Business Roundtable.

The race between Lyft, Uber Copter, Blade helicopter to JFK airport
Target is launching a new grocery brand to boost its food business
To Top
error: Content is protected !!
Top