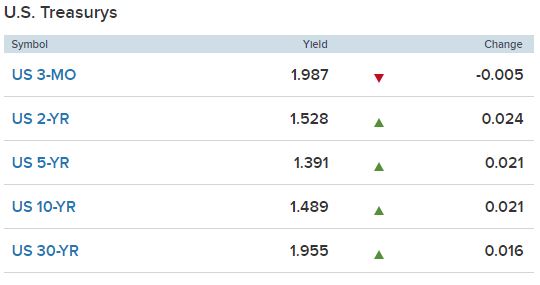 1. Dow set to soar at the open on renewed China trade optimism

U.S. stock futures were pointing to a more than 250-point advance at Thursday’s open for the Dow Jones Industrial Average. Adding support, bond yields were generally higher and China said it’s willing to talk trade with the U.S. Wednesday’s advance on Wall Street put the Dow on track for its strongest weekly gain in 10 weeks. The Dow, S&P 500 and Nasdaq were all on pace to break a string of four losing weeks. However, they were still tracking for hefty losses in August with only two trading days left in the month.

2. China wants to talk to US on trade but rejects further escalation

A Chinese and U.S. flag at a booth during the first China International Import Expo in Shanghai.

China said Thursday it’s open to negotiate with the U.S. with a “calm attitude” to resolve the yearlong trade war between the two nations. The Ministry of Commerce also said officials in Beijing “firmly reject an escalation” of the dispute, which has seen both sides recently announce stepped-up tariff plans against each other’s imports. However, China still did not confirm a claim from President Donald Trump on Monday that Chinese officials called over the weekend with the desire of reaching a deal soon. Officials previously said they were unaware of such a call.

Falling bond yields on concerns about the trade war and the global economy paused Thursday, with most of the yield curve moving higher. However, the yield inversion recession signal was still flashing, as the 10-year Treasury interest rate remained lower than the 2-year’s, and the 30-year yield was actually lower than the 3-month. The 30-year Treasury yield dipped to an all-time low Wednesday, as bond-buying on perceived safety carried the day. But unlike in recent sessions, lower yields did not drag stocks down.

Treasury Secretary Steven Mnuchin said ultra-long U.S. bonds are being considered by the Trump administration, according to Bloomberg News. The idea of a 50-year or even 100-year bond recently gained popularity at Treasury but had been considered as early as 2009, Bloomberg reports. Issuing longer term debt would allow the government to lock in low borrowing rates over a longer period and to offer another vehicle to capitalize on the insatiable global appetite for U.S. debt.

U.S. oil prices were higher Thursday morning, a day after Dorian was upgraded to a hurricane. Forecasters warned on Thursday that the now-Category 3 storm was gaining strength and tracking toward the Bahamas on Saturday and Florida’s eastern coast by Sunday afternoon over the Labor Day holiday weekend. Nearly two years after Hurricane Maria leveled Puerto Rico, the island seems like it was mostly spared by Dorian.


— AP contributed to this report