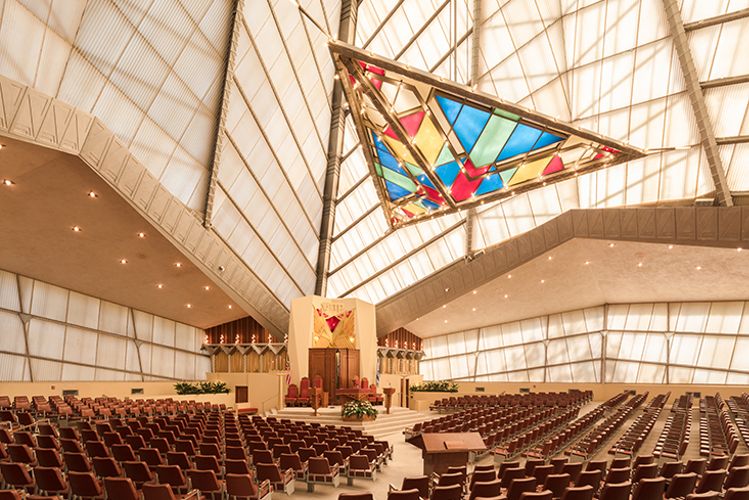 
Topped by a glass pyramidal tower that infuses the interior with natural light, the Beth Sholom Synagogue in Elkins Park, Pennsylvania ranks as one of Frank Lloyd Wright’s most striking architectural creations. Still, the preservation foundation that tends to the welfare of the 1959 synagogue is eager to raise its profile and reposition it as a cultural resource.

To that end, it has invited the artist David Hartt to “activate” the space with an installation that explores the histories of the Jewish and black diasporas in the US. Opening on 11 September, the exhibition, David Hartt: The Histories (Le Mancenillier) blends sculpture, tapestries, film, photographs, music and flowers in a way that respects Wright’s interior design yet transforms the visitor’s perception of it.

With the words The Histories, the artist invokes the ancient Greek historian Herodotus, who presented “a sweeping interconnected narrative of many peoples” that “doesn’t recognise conventional boundaries”, Hartt says. Le Mancenillier refers to a piano work by the 19th-century composer Louis Moreau Gottschalk, the son of a German Jewish father and Creole mother who fused African American and Afro-Caribbean melodies within a classical idiom. (The mancenillier, or manchineel, is a highly poisonous tree that grows in the Caribbean Basin.)

Sound is a crucial element of the installation: to weave an immersive environment, Hartt invited the Ethiopian pianist Girma Yifrashewa to make new recordings of Gottschalk’s music that will serve as a score for the exhibition. The Haitian-born baritone Jean Bernard Cerin has organised a series of five live performances on select Sundays that draw on Jewish and Caribbean musical traditions.

Adding to the atmosphere, large monitors positioned in the synagogue will display digital video and photography of landscapes shot by Hartt while in New Orleans and Haiti revisiting the historic neighbourhoods of Gottschalk’s family. Serving as another catalyst for the artist’s visual vocabulary is Martin Johnson Heade, a 19th-century painter known for his landscapes, seascapes and images of tropical flowers and hummingbirds.


“I was really interested in these kinds of romantic depictions of landscape almost as a kind of symbol for possibilities of freedom and emancipation,” Hartt says, noting that Heade was an abolitionist and the hummingbird was once seen as an emblem for freedom.

Two large jacquard tapestries depicting an orchid and a landscape from the artist’s travels have been commissioned from a Belgian textile maker. And Hartt will replace the artificial foliage located in planters throughout the synagogue with tropical plants native to the Caribbean, and install grow lights emitting a fuschia glow.

“I’m hoping that it begins to create a futuristic kind of perception of the building,” Hartt says. “When you see the building at nighttime, all lit up, it really will look like an object from outer space has landed.”


To serve the synagogue’s needs, the artist has even arranged for orchids in planters to capture rainwater that formerly leaked through the glass ceiling into buckets and kiddie pools in the main sanctuary.

The installation is the first in a trio of works planned by Hartt, an assistant professor of fine arts at the University of Pennsylvania. The next one, slated for next spring in the Corbett vs. Dempsey gallery in Chicago and titled The Histories (Old Black Joe), is a meditation on “race and place” inspired partly by the music of Stephen Foster and the images of the landscape painter Robert S. Duncanson.

Major funding for the Beth Sholom show has been provided by the Pew Center for Arts & Heritage.

The curator of the show, Cole Akers, who is accustomed to working with significant architectural spaces as a curator and special projects manager for Philip Johnson’s Glass House in New Canaan, Connecticut, is hoping that the exhibition will create “a convivial atmosphere that audiences will be able to linger in and explore” even as the building continues to function as an active synagogue.

“Creating something that would resonate and also have a real presence without competing with the atmosphere of the space itself is always a challenge,” he says of the building, which like the Glass House is a national historic landmark. “I think David’s approach is expansive.”

“To think about the ways that communities come together and sort of hold each other is a really powerful and poetic statement to make.”

Inaugural Rabat Biennale to be made up (mainly) of female artists
Gerhard Richter to donate works for a room devoted to his art in new Berlin museum
To Top
error: Content is protected !!
Top