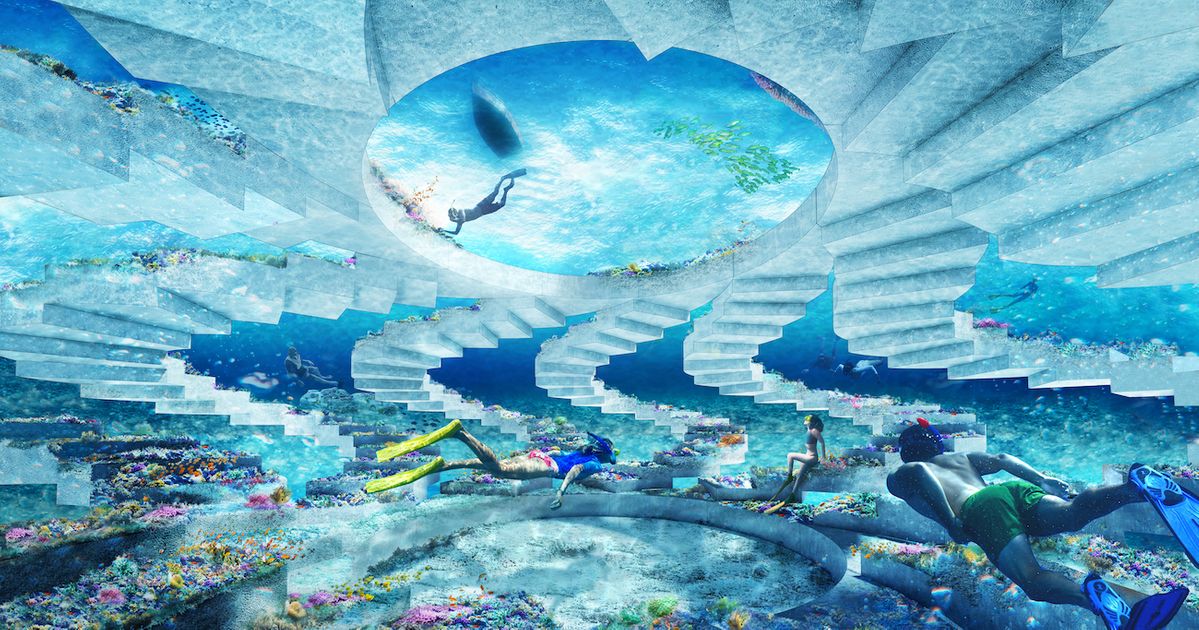 Rendering of OMA Installation for The ReefLine
© OMA

While concerns around climate change and rapidly rising tides have taken a back seat amid the coronavirus pandemic, plans for an underwater sculpture park that will attract art enthusiasts and ecologically-minded tourists is underway in Miami Beach. The project, called The Reef Line, has been conceived by the artist and art collector Ximena Caminos, the former artistic director of the Faena Forum, and will be designed by the architect Shohei Shigematsu/OMA in collaboration with marine biologists and coastal engineers. The park will span seven miles, with the first mile slated to open in December 2021 with a commission titled Concrete Coral by the conceptual Argentine artist Leandro Erlich, who “has the uncanny ability to encourage us to pause and reflect upon how we view the world around us”, Caminos tells The Art Newspaper.Erlich’s most recent work, titled Order of Importance, “spoke directly about climate change and sea level rise”, Caminos says. It was commissioned by the City of Miami Beach for Miami Art Week last year and comprised cars and trucks submerged in sand as a conspicuous metaphor for the destructive nature of industrialism and carbon emissions on our planet. The new commission will create space for the formation of natural coral reefs, which have been in decline worldwide but have faced significant disintegration in Miami Beach in the past decade. The piece aims to have the “beauty of not just being an amazing artwork but also a sculptural reef serving a specific environmental function”, Caminos says.

The park’s master planner Shohei Shigematsu/OMA plans to create a sculpture that doubles as a monumental underwater staircase, adding another dimension to the visitor experience. The work “renders an architectural element poetically ornate in the weightlessness of underwater, reminiscent of marine life and providing layered zones to maximise the opportunities for coral reef growth and areas for exploration”. In later phases, the park has commissioned the artists Ernesto Neto and Agustina Woodgate to create underwater works. The artists were selected as part of the project’s aim to commission artists “whose work relates and responds to the environment and raises awareness about the urgent issues facing our planet”, Caminos says. The ambitious sub-aquatic project is estimated to cost around $1m in the first phase, and will be publicly accessible from the shoreline of the beach, with visitors being able to navigate the space using a snorkel. The project received concept and design funding from the Knight Foundation’s Art Challenge Award. It is “a singular investment in civic infrastructure, public art and environmental protection that will pay dividends over the coming decades”, Caminos says. And as the city—and especially the arts sector—continues to faces grave financial disruption, the park is “an important project to have on the horizon as we endure the impact of the pandemic in our community”. Caminos is also the artistic director of another groundbreaking public art project, the Underline linear park beneath the Miami monorail, which is close to opening its first phase soon. The development of The Reef Lab is being led by the non-profit foundation BlueLab Preservation Society—which is also led by Caminos—with Coral Morphologic, a Miami-beach based hybrid art, music and science collective which works to chronicle the decline of coral reefs and explore the symbiosis of humans and coral with visually hypnotising installations and videos. The group is best-known for producing Animal Collective’s cosmic audiovisual album Tangerine Reef that was released in 2018.

The City of Miami beach and researchers from the University of Miami are also involved in the project. Dan Gelber, the mayor of Miami Beach, approved the proposal for the project this week, stating that Miami Beach has a “world renowned environment and beaches, and has in recent years established itself as a true international arts and culture destination”. The “resilient, unique project” will help city officials “continue collaborating with the best of the scientific and artistic community and elevate our community”.

Pastures new: why some top gallery staff are moving on from longtime jobs
Jewish collections looted by the Nazis to be examined and traced in new database
To Top
error: Content is protected !!
Top