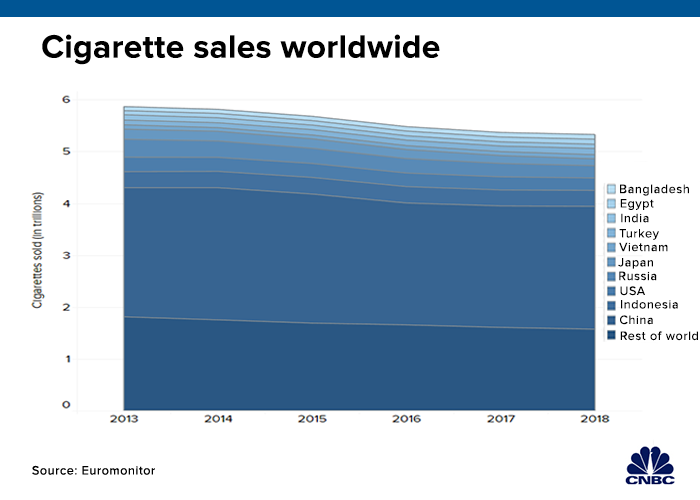 For Altria and Philip Morris International, breakin’ up may have been too hard to do.

A decade after going their separate ways, the two tobacco giants announced this week they are considering a merger.

The potential merger would end years of speculation on whether the companies would eventually reunite. Marlboro-maker Altria spun off PMI in 2008 to help the international business grow and shield it from the U.S. regulations and litigation.

If they recombine, the newly formed company would be a $200 billion behemoth that dwarfs the market value of its next-largest rival, British American Tobacco, by about $120 billion. But a lot has changed in the decade since the two split, and Big Tobacco can no longer pin its future on the cigarettes its empire was built.

Only problem: The two main sectors Altria is eyeing for growth — vaping and cannabis — are new fields beset by regulatory challenges. Electronic cigarettes, in particular, are already hamstrung by investigations, litigation and accusations of intentionally hooking underage kids on addictive nicotine pods.

Selling cigarettes is still an incredibly profitable business — albeit a shrinking one. Global smoking rates are declining as health officials across the globe sound alarms over its long-term health consequences. In response, tobacco companies are developing other ways to deliver nicotine that are less carcinogenic, including e-cigarettes, heated tobacco products and oral-derived nicotine pouches that don’t release the toxins in tobacco known to cause cancer.

Merging Altria and PMI’s businesses would allow the combined company, which already sell the same cigarette brands, to work together on new products, or at least that’s the thought, according to people familiar with the company’s thinking. A deal may not materialize, the companies warned. And if one is reached, the company’s boards, shareholders and regulators would need to approve.

But Moody’s analyst Roberto Pozzi said the combined company could use its heft to invest in new products, generate more profit and better manage the risks that come with entering new markets.

From 2013 to 2018, cigarette sales volume slid 9%, with 5.3 trillion cigarettes sold around the world last year, according to data from market research firm Euromonitor International. But thanks to price hikes, global cigarette sales revenue grew 15% in the period, totaling $713.66 billion in 2018.

Consumers are dabbling in new products that promise to deliver a nicotine fix without all the harm that comes from smoking. And some regulators are embracing the shift. The U.S. Food and Drug Administration acknowledges that nicotine products exist on a so-called continuum of risk, where cigarettes are the most harmful way to consume nicotine and other products, while still harmful, are probably less risky.

E-cigarettes have so far been the most popular alternative. Between 2013 and 2018, global sales have skyrocketed 324%, totaling $15.69 billion in 2018, according to Euromonitor. That’s still just 2% of the total $814.3 billion global tobacco market, but with so much more potential room to grow than cigarettes.

Tobacco giants are taking notice of shifting consumer tastes. PMI has carefully overhauled its image with a new mission: “designing a smoke-free future.” Since 2008, PMI has invested more than $6 billion on iQOS, its heated tobacco device and other next-generation products.

A man smokes with the electronic tobacco heater IQOS (I quit ordinary smoking) of the tobacco company Philip Morris.

IQOS looks more like an iPhone than a tobacco product. The white holder contains the slender device, which heats a small stick of tobacco that PMI calls a “heatstick.” PMI has introduced iQOS in 48 markets around the world since its pilot run in Italy and Japan in 2014 and already has about 11 million users.

Reduced-risk products, as PMI calls them, are becoming a more important part of PMI’s business. Last year, they accounted for about 14% of the company’s total $29.63 billion in revenue, up from shy of 3% in 2016.

IQOS will enter the U.S. market next month after U.S. regulators cleared it in April. Altria will pay royalties to PMI to sell the device in the U.S. as part of a licensing agreement the companies signed in 2013. The U.S. market was much less crowded when the arrangement was announced.

An e-cigarette called Juul entered the scene in 2015 and quickly captured about half of the nicotine vaping market, according to Altria. The company’s own in-house e-cigarette brands, Mark Ten and Green Smoke, had captured a fraction of that and were shuttered in December — shortly before Altria announced its 35% stake in Juul for $12.8 billion.

An employee picks up a Juul Labs device kit for a customer at a store in San Francisco, California, on Wednesday, June 26, 2019.

With cigarette sales declining, much of Altria’s future growth hinges on its risky bets on cannabis, its success in winning iQOS customers and the continued growth of Juul, which is under intense scrutiny. The FDA and other regulators have been investigating the companies marketing practices with officials laying much of the blame on the surge in teen vaping directly on the company.

Altria CEO Howard Willard has said that building a diverse portfolio will position Altria to succeed. Altria added oral-derived nicotine pouch brand On to its lineup through a $372 million deal with Burger Sohne announced in June.

In addition to its growing list of nicotine alternatives, Altria has a hand in the cannabis industry. Altria invested $1.8 billion for a 45% stake in Canadian cannabis company Cronos late last year.

“The combination of Philip Morris International’s iQOS, the bestselling heated tobacco product, with Altria’s stakes in Juul, the leader in e-vapor, and cannabis can result in a dominant portfolio that taps into the most important industry growth opportunities in the future,” Euromonitor analyst Ivan Genov said in a statement.

A combined Altria and PMI would own a full suite of new products in a rapidly changing industry. But some aren’t so sure the companies need to merge, especially now.

PMI could give Juul what Altria cannot — help growing internationally. But U.S. regulators still have not approved Altria’s investment in the e-cigarette company. Juul’s headaches in the U.S. are only growing. The FDA has threatened to pull Juul’s products amid a teen vaping “epidemic,” lawsuits across the country are accusing Juul of targeting kids and lawmakers are scrutinizing the company over its marketing practices.

PMI will already profit on iQOS’ sales in the U.S. thanks to the partnership agreement. Merging with Altria would expose PMI to the tumultuous U.S. market, where regulators are pursuing disruptive policies like reducing the nicotine levels in cigarettes to minimally or nonaddictive levels and banning menthol cigarettes.

“It’s just not clear to me what they can do together that they can’t do separately, especially when they’re working together on some of these things, like iQOS,” said Piper Jaffray analyst Michael Lavery.