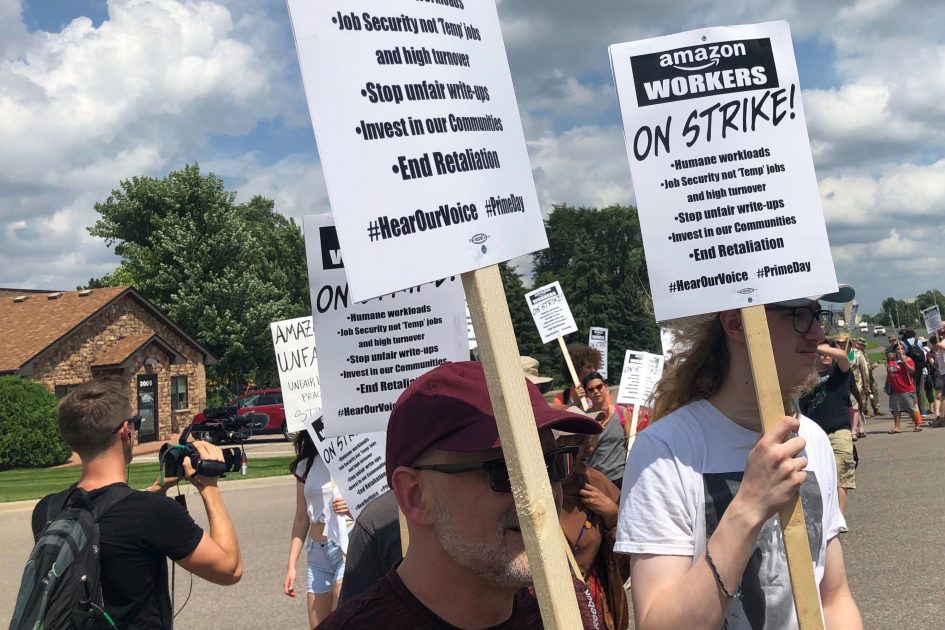 Amazon facility workers hold a sign during a protest in Shakopee, Minnesota, July 15, 2019.

Shopping with Amazon on Prime Day, likely to be one of the online retailer’s biggest sales days of the year, may mean crossing a digital picket line.

Amazon workers in Minnesota and Germany are striking in protest of working conditions and wage practices, just as Prime Day kicks off.

Those in Europe have staged protests during sale days in past years. But the action in Minnesota is the first major strike of workers in the United States during the company’s annual Prime Day event. It may also be a sign that the company’s increase to a $15 minimum wage last year is not enough to satisfy workers’ needs.

This year’s Prime Day could bring in as much as $5.8 billion in sales globally, according to Coresight Research. Last year, Amazon reported that consumers worldwide purchased more than 100 million products. This is also the first time Amazon is holding the midsummer sale since it promised in June to provide one-day shipping on select items to Prime members.

“Amazon has the means to do so much more for all of its employees, and we would like to see less physically and mentally draining jobs,” William Stolz, who has worked in an Amazon warehouse for over two years, said in an interview from Minnesota with CNBC’s “Closing Bell. “

“We would like to see workers have better job security, better treatment for those that are injured, bringing back some of the benefits and bonuses that we used to have,” he said.

The fulfillment center workers in Shakopee, Minnesota, began walking out at 3 p.m. ET Monday and will strike for a six-hour period that overlaps with the morning and evening shifts. There were about 75 workers outside the facility at 5 p.m. ET Monday, chanting “Amazon, hear our voice!” and “We work, we sweat, Amazon workers need a rest!”

Some Seattle tech employees will also be attending the strike in solidarity, according to a statement from the Amazon Employees for Climate Justice.

“These groups are conjuring misinformation to work in their favor, when in fact we already offer the things they purport to be their cause — industry leading pay of $15 per hour, benefits, and a safe workplace for our employees,” Amazon said in a statement. “If these groups — unions and the politicians they rally to their cause — really want to help the American worker, we encourage them to focus their energy on passing legislation for an increase in the federal minimum wage, because $7.25 is too low.”

The majority of workers at that facility are East African. One of the reasons they have been frustrated is, they say, Amazon has not acknowledged their religious practices. The strike is being organized by the Awood Center, a group that advocates for Somali and East African workers.

The strike is part of the workers’ continued pressure on Amazon to “provide safe and reliable jobs, increase respect and opportunities for advancement for the predominantly East African workforce, protect the right to organize and advocate for better working conditions, and to demand concrete action from Amazon to address critical issues like climate change,” the organizers said in a statement.

Workers at the facility, known as MSP1, have rallied against the company before. But the stakes could be higher since it is a major sales day for the company.

Workers striking in Germany lobbied for two days for living wages and bargaining power for employees. More than 2,000 people participated in at least seven locations, the labor union that represents the workers told Reuters. In Europe, where there are stronger labor laws, Amazon workers have staged protests against the company for years.

Amazon said the protests in Germany will not have any impacts on operations or deliveries.

The AFL-CIO also released a video Monday showing solidarity with the workers.

“They’re working under insane deadlines, often in unsafe conditions,” AFL-CIO Secretary-Treasurer Liz Schuler said in the video. “We’re standing strong in solidarity with the workers in Shakopee and beyond, but we hope you will too. When you stand up together collectively, that is how we change corporate behavior.”

Some candidates for the 2020 Democratic presidential nomination also weighed in on social media to show their support of the workers.

Sen. Elizabeth Warren, D-Mass., tweeted on Monday that she supports Amazon workers’ fight for safe and reliable jobs, which she said is a way of holding big corporations accountable.