Apparel retail earnings haven’t been this bad since the recession 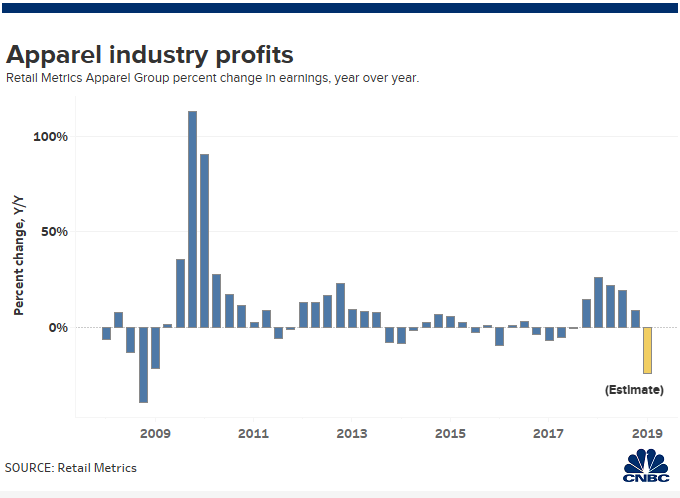 Apparel retailers’ earnings reports haven’t been so disappointing since the Great Recession.

Companies ranging from Gap Inc. to J.Jill to Canada Goose and Abercrombie & Fitch delivered disappointing earnings reports in recent days, casting blame for the results on issues such as cool and wet weather, weak traffic at malls, the wrong promotions in stores and overall product missteps. The bad news has sent those stocks, and the broader industry, tumbling. The S&P 500 Retail ETX (XRT) was down nearly 2% Friday afternoon and has fallen nearly 13% this month, putting it on pace for its worst month since November 2008, when the XRT lost 20.25%.

“These are all mall-based retailers experiencing traffic issues,” Retail Metrics founder Ken Perkins said. “The consumer is holding up … sentiment numbers have been really high,” he added. The problems arise when certain companies aren’t investing in ways to drive customers to their stores and websites, while others are, he said.

Walmart and Target both, for example, had upbeat fiscal first-quarter earnings reports, specifically calling attention to strengths in their apparel businesses. They’ve actually been investing in apparel, rolling out more of their own private labels for women’s, men’s and kids’ clothes.

The biggest victims of changing tastes are the “classic, women’s, missy retailers,” Johnson said — companies like Chico’s and Talbots. “The demand for that product is a fraction of what it used to be a generation ago. Women aren’t dressing like that.”

With fewer women flocking to its stores to buy patterned dresses, Ascena Retail Group recently announced it plans to wind down its Dressbarn business entirely, shutting more than 600 locations in the process. Earlier this week, Ascena’s stock traded as low as 93 cents.

And even as more people are going to one-stop shopping destinations such as Walmart and Target to buy clothes, they’re still shopping at off-price chains such as TJ Maxx and Ross Stores, buying more directly from brands like Zara, Nike and Lululemon, from Amazon, or from online platforms such as Stitch Fix and Rent the Runway.

The threat of tariffs has also been a recent drag on apparel retail stocks — even though some haven’t hit yet.

The White House is still considering a 25% tax on clothing and footwear imported from China, so many retail executives have been forced to address this issue on recent earnings conference calls. Many companies haven’t yet factored the 25% tariffs into their profit outlooks, which could lead to future earnings disappointments if President Donald Trump ultimately pulls that trigger.

Then, late Thursday, more uncertainty piled up when Trump raised the possibility of putting 5% duties on Mexican imports starting June 10. This round of tariffs, which could gradually increase to 25% by October, would be aimed at putting pressure on Mexico to help curb illegal immigration.

“A lot of companies are vulnerable,” CGP’s Johnson said.

Week to date, shares of Abercrombie are down almost 30%, while Canada Goose shares have fallen 29.6%, Gap’s stock is down nearly 15%, and Michael Kors parent company Capri Holdings shares are down 13.3%. All of these companies reported earnings this week.

— CNBC’s Gina Francolla and John Schoen contributed to this reporting.