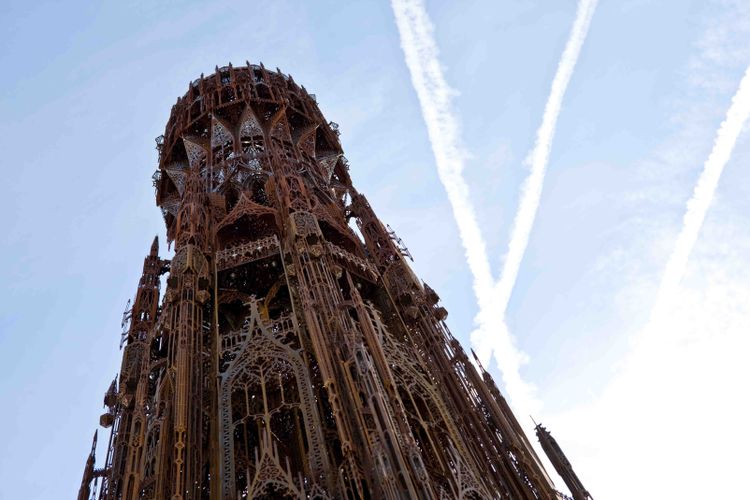 
The Belgian artist Wim Delvoye says he will take part in the international competition for the reconstruction of Notre Dame, and is already working on proposals to restore the fire-ravaged Medieval cathedral.

Yesterday, the prime minister of France, Edouard Philippe, launched an international architectural competition to rebuild the spire of the gutted medieval cathedral.

“According to Philippe, a new spire, adapted to contemporary techniques and interpretations, is one of the possible outcomes of the competition. The Wim Delvoye team is therefore working hard on a first proposal,” according to a statement issued by the artist’s studio.


The 93-metre spire, which collapsed in the devastating fire at the cathedral on Monday, was erected in the 1860s when the cathedral was dramatically reshaped by the architect Eugène-Emmanuel Viollet-le-Duc. “The international competition will allow us to ask the question of whether we should even recreate the spire as it was conceived by Viollet-le-Duc,” Philippe told French press.

Delvoye is known for his laser-cut stainless steel works, creating trucks, concrete mixers and towers in a neo-Gothic style. In 2012, he unveiled a corkscrew-like tower at the Louvre called Suppo which was inspired by Flemish Gothic architecture.

“Based on the many years of deepening in the Gothic architectural style, Wim Delvoye feels strongly encouraged to contribute to the reconstruction of this monument [Notre Dame],” the statement adds.

How to future-proof a work of art that will not be completed for 100 years
Indigenous and First Nation artists to take centre stage at next Biennale of Sydney
To Top
error: Content is protected !!
Top