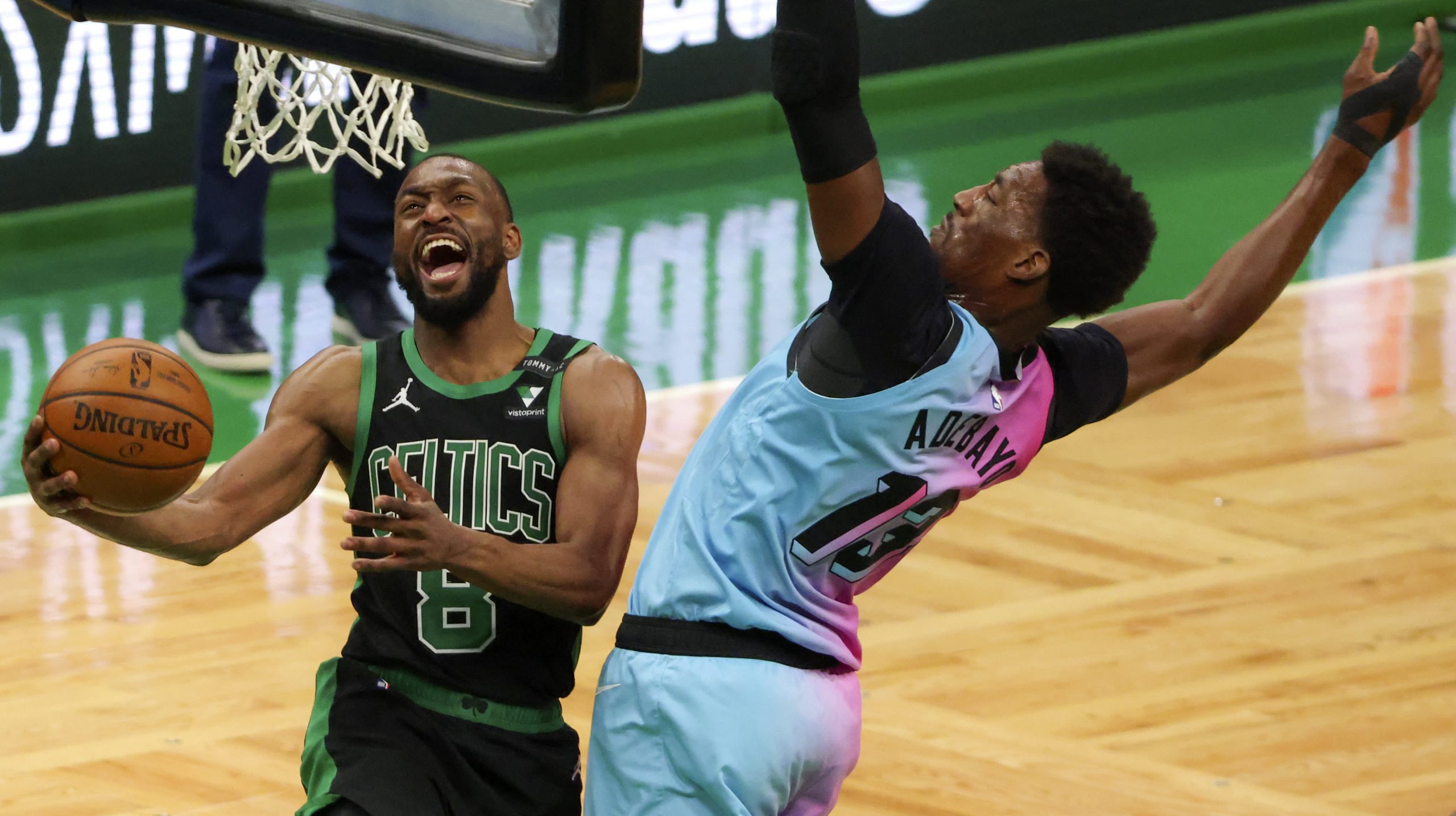 Boston Celtics guard Kemba Walker (8) is fouled by Miami Heat center Bam Adebayo (13) during a regular season NBA game on May 9, 2021 at TD Garden in Boston, MA.Matthew J. Lee | Boston Globe | Getty ImagesDesign and marketing company Vistaprint made its first significant investment in pro sports in 2020, and now one of the most iconic National Basketball Association franchises need to fulfill its part.The Boston Celtics have struggled lately, falling to clubs including the draft lottery-bound Oklahoma City Thunder, the Chicago Bulls and the Miami Heat.At 35-33, the team is sitting seventh in the Eastern Conference and now on the verge of losing its seventh consecutive playoff berth as the NBA enters the final week of the regular season. This season, the NBA mandated seeds seven through 10 participate in play-in games to determine postseason placement. The games pair the lower seeds to pick the final two playoff spots.If the Celtics remain seventh and lose two play-in games, the club will miss the playoffs for the first time since the 2013-14 season. In an interview with CNBC on Monday, Ricky Engelberg, Vistaprint’s chief marketing officer, said he’s “optimistic” that won’t be the case, though.”The Celtics are always going to be the Celtics,” Engelberg said. “It would be amazing if they went on a multi-year run with multiple championships and deep playoff runs. But the Celtics are the Celtics and one of the most iconic sports franchises in the world.”Semi Ojeleye #37 of the Boston Celtics shoots the ball during the game against the Orlando Magic on May 5, 2021 at Amway Center in Orlando, Florida.Fernando Medina | National Basketball Association | Getty ImagesVistaprint TV exposure at riskThe NBA generated roughly $150 million in revenue from its patch program, which was introduced for the 2017-18 season. The program lets companies pay to put their logo on a patch on the shoulder of each player’s jersey.Companies who purchase an NBA team patch covet the brand awareness obtained when teams play national games on ESPN or TNT, the league’s top media partners. So, when a club makes the postseason, it helps the patch increase in value. Hence, if the Celtics miss the playoffs, their jersey patch partnership with Vistaprint takes a hit, as the company loses the increased brand exposure.Vistaprint used agency Excel Sports to strike a deal with the Celtics in November 2020, taking over the jersey patch slot from General Electric. Due to a non-disclose agreement in place, financial details of the pact weren’t provided, but it’s estimated Vistaprint is paying in the range of $10 to $15 million per year for the rights, according to industry insiders. GE paid roughly $7 million per year in its deal with the Celtics.Like most patch deals, this agreement includes Vistaprint signage at TD Garden, the Celtics home arena, and brand showings across the team’s G League and esports team.Engelberg, a former Nike executive, said the decision to enter the partnership was partly due to the Celtics’ status in pro sports. But the reach of the team’s patch probably factored in, too. According to Sports Business Journal, the GE patch on Celtics jerseys was one of the more recognizable patches among NBA clubs.”They’ve earned so much equity as a franchise over the years,” Engelberg said. “But as important as the postseason is, finding a franchise where every game matters was just as important.”Owned by Ireland-based customization company Cimpress, Vistaprint specializes in creating logos, campaign banners, and website designs for smaller companies. On its website, the company says it does over $1.4 billion in annual revenue.Engelberg said one of the initiatives included in the deal with the Celtics is building more exposure for small business clients in the Boston area, so Vistaprint grants part of its in-arena signage inventory to companies for games that are not televised nationally. “Our inventory is their inventory. Our partnership is their partnership,” Engelberg said. “It’s not just about logo placement. But from a 360 standpoint, how we could partner together where it’s us, the Celtics, and small businesses to create this truly unique moment to shine a spotlight on the core customer that we partner with so much.”Helping Black businesses Last week, the company also activated another campaign aimed to help Black businesses. It paired with Celtics guard Kemba Walker to auction a signed Panini trading card and autograph game-worn sneakers from Sunday’s 130-124 loss to the Heat. The auction concludes Wednesday, and all profits will be donated to a grant program that grants $25,000 to Black businesses in Boston.The Celtics and Vistaprint committed $1 million to the program, and Walker will donate his undisclosed partnership fee, too.”It’s great to have someone like Kemba that wants to be able to share his spotlight with people throughout the community,” said Engelberg, reiterating the company is more focused on the long view of the Celtics patch deal.”Almost one season in with the Celtics, we’re excited for how this year has gone. And we have just as many exciting things for the future that we want to try and make happen,” Engelberg said.Cimpress has a market capitalization of $2.5 billion. Its stock trades on the Nasdaq and was down 3% on Monday, closing at $98.39 per share.